The latest innovation in rock bolting technology – the Roofex rock bolt – is rapidly demonstrating its ability to provide predictable and reliable support, even in the most challenging applications. The Vilafruns potash mine in Spain is an outstanding example.

Mines around the world are reporting positive experiences after testing the new Roofex rock bolt from Atlas Copco. But conditions at the Spanish potash mine, Vilafruns, are exceptional and proving that this new concept is nothing short of a major breakthrough in mine safety.

Trials with Roofex bolts have been carried out at Vilafruns with increasing intensity since 2007. Now the preliminary findings show that Roofex is able to contain and control significant ground movements where conventional rock bolts fail to cope with rock convergence.

Iberpotash, owner of Vilafruns Mine, has consistently focused on increased efficiency and cost reduction since its takeover by ICL Fertilizer, and has an open-minded approach to new technology which prompted the Roofex trial. In addition, the mine’s workings, which are some 600-900 m deep, are affected by strong convergence from high stress zones and plastic rock. The mining method is room and pillar with each room typically 7-8 m wide and 5-5.5 m high. 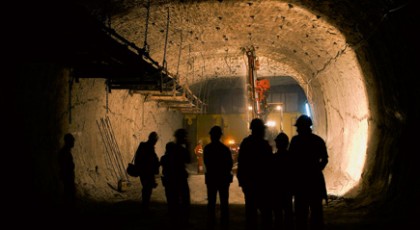