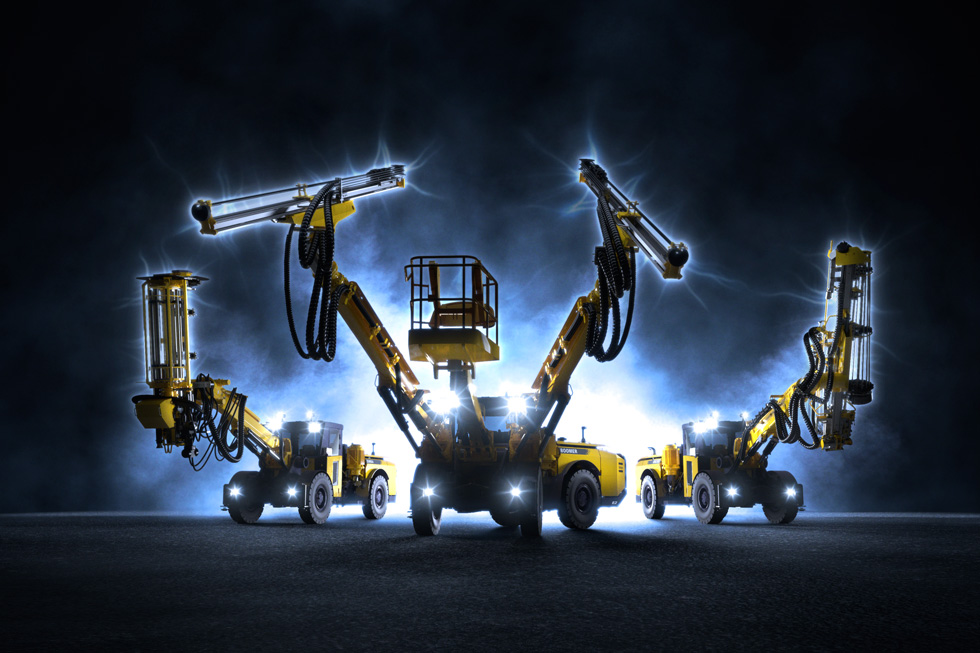 A major new development for underground drillers is now being launched featuring a range of top class drill and bolting rigs for mining and tunneling incorporating the world’s most successful boom.

Since its launch in 2005, the BUT 45 heavy duty boom has become world renowned. Mounted on the Boomer E-series drill rigs it quickly earned itself a reputation for strength, sturdiness, precision and reach.

But this highly acclaimed boom is no longer exclusive to the Boomer range – it is now also available on the latest Simba and Boltec rigs as well.

As a result, the Simba and Boltec rigs now join forces with the Boomer to make up a completely new family of
Atlas Copco drill rigs – the E-force family.

With the BUT 45 installed across the full range, Atlas Copco’s powerful rock drills and Rig Control System (RCS), the E-force is set to have a major impact on drilling performance and productivity.

The E-force family comprises 15 different models, both electric and diesel powered with the BUT 45 as the key, common component. In all cases, the boom’s high precision substantially reduces positioning time between holes, speeding up the drilling. Furthermore, the BUT’s strength and sturdiness enables all Boomer rigs to carry a rod handling system.

The Simba rigs in the E-force set a new standard for fast, precise and productive rock drilling, even under the toughest mining conditions. The increased carrying capacity of the BUT boom enables the RHS 35 rod handling system to be used and the boom can also be extended up to 1.6 m with the shorter extension of 1 m used for the highest load. Their four stingers also enable these rigs to be set up easily, accurately and with maximum stability. The Simba E-series can also carry Atlas Copco’s most powerful rock drills. The Boltec member of the E-force family takes safety and efficiency to a new level. Its BUT 45 boom can be extended 2.5 m and the feed by 600 mm, enabling the rig to reach coverage areas of 12 m x 8 m in one setup. Equipped with the new, faster COP 1435 rock drill, this versatile and robust unit can be used with a wide range of bolt lengths and can also be adapted for ground reinforcement applications. The first E-force Boltec rig to be delivered is now being successfully used by the Kemi mine in Finland. This unit, Boltec EC EH-DH, is both electrically and diesel powered. With the launch of E-force, new rig versions have also been added such as the Boomer E1 C in a special diesel-hydraulic version (DH) which can be used  anywhere such as in new mine projects where the infrastructure is not yet in place.

All in all, the new E-force family offers the most extensive range of options available (the Boomer has no less than 25 feeds and 60–85 standard options) and there is a wide choice of rock drills ranging from 16–30 kW. For a full description of the new E-force family, go to e-forcefamily.com