Concrete results down the road

For nearly 80 years Boliden has mined ore in the Kristineberg mine – and the challenges have grown as the working depth has increased. Geological conditions mean that half the time is spent reinforcing rock, rather than mining it. Together with Atlas Copco, Boliden has started on a journey to tighten up the bolting process.

THE HEADLIGHTS OF the Boltec LC rock bolting rig light up the walls and roof of the concrete-covered drift. The last dark patches have almost completely disappeared. “The concrete’s now been hardening long enough for me to be able to start bolting,” says operator Magnus Linder, fixing his gaze on the screen in the cabin of the bolting rig. He focuses the optical instruments on the last row of bolts in the wall of the drift, “zeros” the rig on them and enters the preset bolt pattern in the Bolt View program. The screen shows him exactly where to position the bolts to form a perfect fan, with a gap of 1.2 meters both between the bolts in the rows and between each row. Magnus directs the boom towards the wall and drills with the drill steel, then changing over to the cement hose and filling the hole with cement. Finally, he uses the rig’s bolt driver to drive home the 2.7 meter long rock bolt – a reinforcing bar with a threaded end and a plate at the far end. Another 59 bolts and the drift will have been sufficiently reinforced. BOLIDEN HAS BEEN mining ore in the Kristineberg mine, situated in Lycksele municipality in northern Sweden, since 1940. Initially a large part of the production was from open-pit mines, but now all the ore is mined underground – right down to a depth of 1 350 meters. The high rock pressure and the weak nature of the rock mean that the rock has to be reinforced so that it does not collapse after blasting. Walls and roof are coated in sprayed concrete, and the drifts are then reinforced with long bolts.

“Half of the drill-and-blast cycle time is spent on reinforcing the rock,” says Mine Manager Sunniva Haugen. 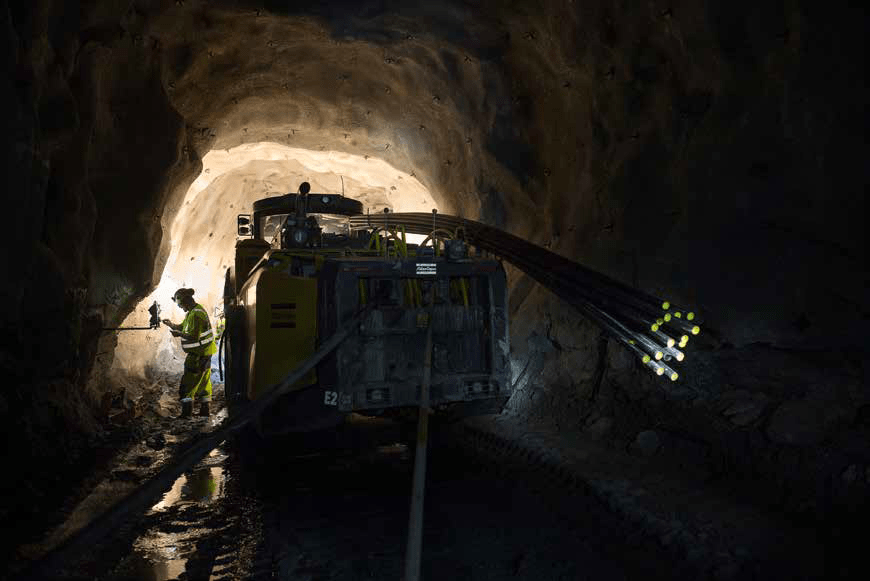 Daniel Lithell uses a theodolite to position the next round. The trick is to follow the irregular ore-boundaries that the geologist has entered into the onboard computer guidance system.

That’s a huge amount of time. Rock reinforcement is vital for safety, but generates no revenue. Bolting takes twice as long as blast hole drilling and is the bottleneck in the mine – in other words, the limiting factor on production capacity. The more bolts we can get in, the more rock we can mine.” 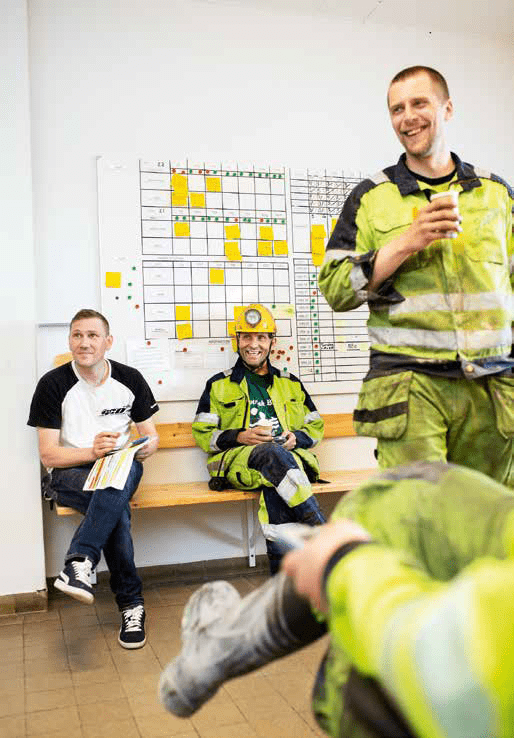 At the shift start, Rock-support Supervisor Jens Jonsson (left) distributes work orders and informs his crew of risks or nonroutine conditions in the mine.

In 2016, BOLIDEN began working in partnership with Atlas Copco and ABB to streamline the bolting at Kristineberg. The Boltec Optimization (BoltOpt) project aims to reduce the time it takes to drive drifts by 20 percent. The work began by collecting a large amount of data, primarily through Atlas Copco’s telematics solution Certiq (that gathers, compares and communicates vital equipment information) and Boliden’s own systems, but also from field studies and by talking to operators, technicians and supervisors. Having compared this information with performance indicators, Atlas Copco – in dialog with the operators – came up with suggested improvements. The main conclusion was that the logistics down in the mine could be tightened up. “The aim was to find time thieves, and we got them in black-and-white thanks to Atlas Copco,” says Michael Andersson, Development Engineer at Boliden’s central technical department. “We were aware that a lot of time was being lost both through transporting people and replenishing stocks, but we didn’t realize how much.”

INITIALLY, THE SEARCH for new deposits in Kristineberg went more or less straight downwards, but over the years the tunnels and drifts have moved westwards – with the result that distances in the mine have increased. It is not uncommon for operators to travel several kilometers from one point to another during a shift. As regards transporting people: It all comes down to the fact that the operator of the bolting rig is generally the one driving the vehicle, so is the last to get to his or her workplace – despite the fact that he or she has the most time-consuming task. The reason for this is that the Boltec operator spends nearly all his or her time in the same place (the others will move their machines to new drifts in the meantime), so he or she is always by the vehicle when it is time for a meal break or shift change.

■ Established when gold was found in Boliden in 1924.

■ Over the years, ore has been mined in around 30 mines.

■ Today it encompasses three underground mines, one openpit mine and a concentrator, in what is known as the Skellefteå field.

This is a well-known fact to the operators, who at the time of Mining & Construction’s visit to the Kristineberg mine have just been sitting in a meeting of one of the improvement teams, led by Michael Andersson and part of the company’s Lean work. “Transporting people takes up a lot of time,” says André Lindholm. “One way to reduce this might be to have a transport vehicle, and that is a suggestion that we operators have made.” Michael Andersson nods:

“Needless to say, being helped to get as much as possible out of our machines is a good thing – and we want to spread the knowledge.”

“That has been up for discussion, but would require an extra person per shift. What we have done for now is tighten up the procedures so that we get the Boltec operator in position as quickly as possible.” To reduce time spent on transporting bolts and cement, a new stockpile is being built up closer to the part of the mine where most mining is going on. “It’ll save time, but in the longer term we may need to have a vehicle driving material out there. That’s also something we’ve discussed,” says Michael Andersson.

ON TOTALING UP the first part of the BoltOpt project it became clear that the shift team’s effective working time had increased and that the number of bolts being positioned was up by around 10 percent. In terms of generating money for Boliden, this represents an extra drill-and-blast cycle per month. “Since a round cycle is worth half a million kronor – or roughly 50 000 euros – it’s extremely important to be as efficient as possible,” says Sunniva Haugen. “So it’s great that the BoltOpt project is having such excellent results. To start with, Certiq provides very useful information. As soon as we identify a problem, Certiq helps us find out all of the details. What’s more, the fact that Atlas Copco has been able to have such close dialog with our employees and has gathered information in the field is of great value.” The next step in tightening up the processes at Kristineberg will involve more shift teams as well as the Boomer E2 drilling rig. “In the longer term, more of Boliden’s mines can definitely be involved,” says Michael Andersson. “Needless to say, being helped to get as much as possible out of our machines is a good thing – and we want to spread the knowledge.” 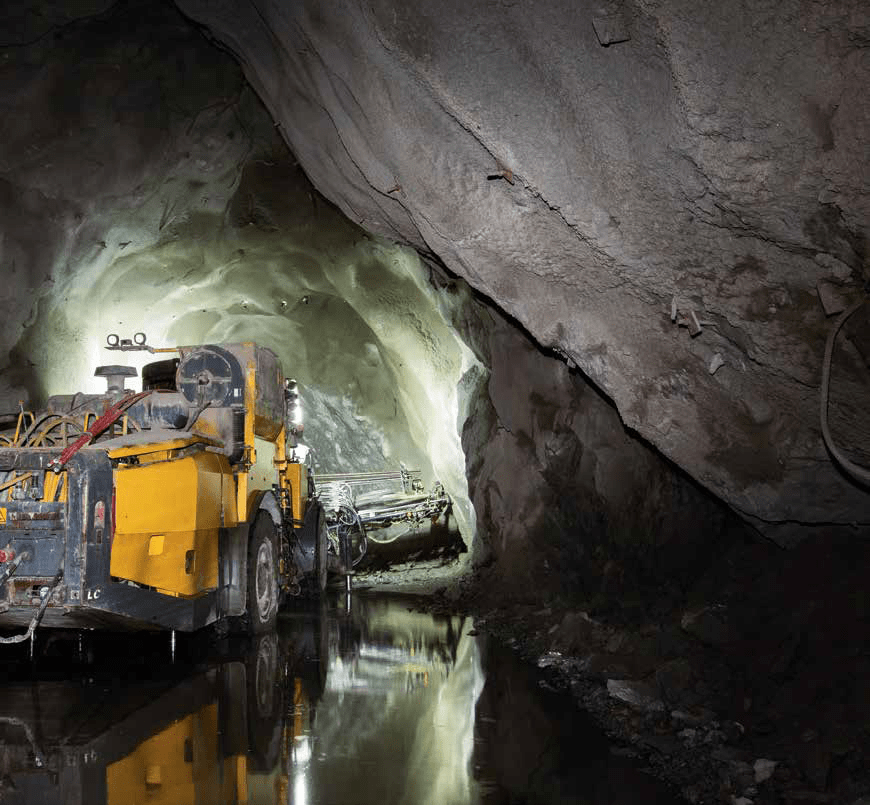 ■ Mining takes place underground at depths down to 1 350 meters, using the cut-and-fill method.

Kristineberg has put greater focus on getting the Boltec operators out to their workplaces as quickly as possible, since their part of the process takes the most time. A new stockpile for materials aims to shorten transport times.

Each shift now has its own supervisor for rock reinforcement and extraction respectively, meaning that the supervisor can be more effective and also find time to coach staff and develop their skills.

Each shift has its own improvement team – a forum for involving employees and benefiting from their knowledge. The teams’ work also brings more opportunities to catch problems far out in the organization. 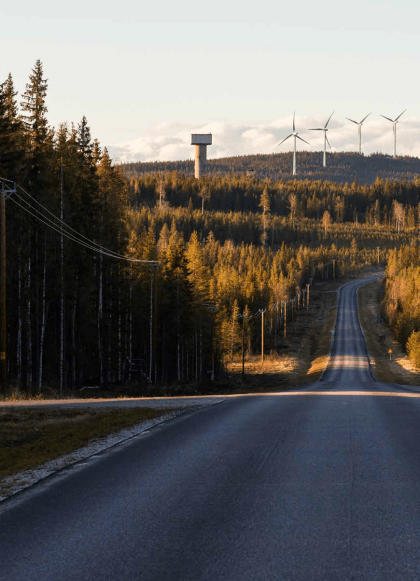