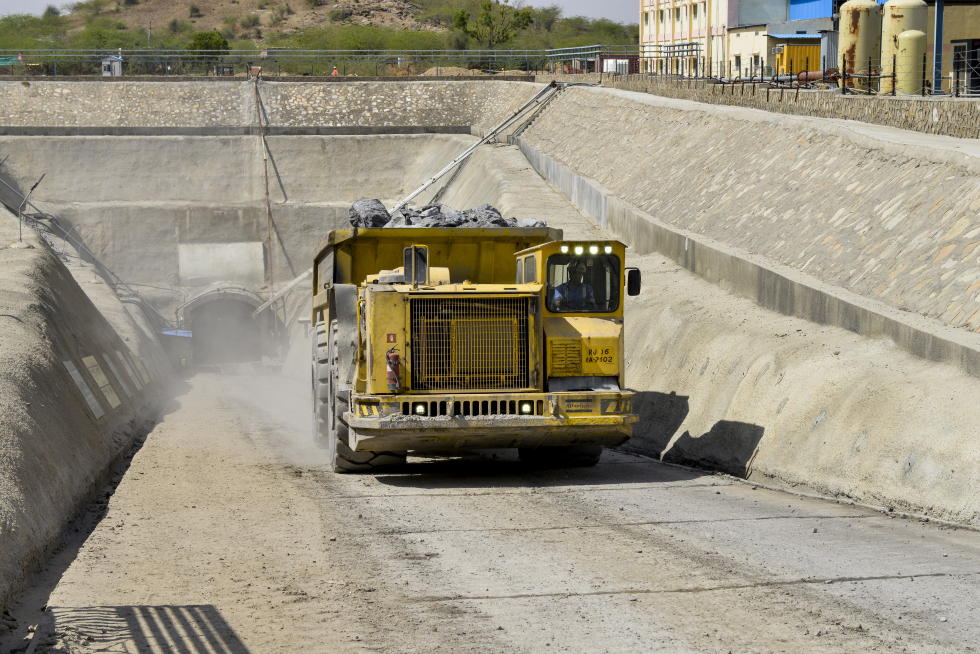 Underground Mining
An Atlas Copco Minetruck MT5020 hauls out its load from the Kayad Mine.

The zinc king of Rajasthan

Interaction and dialogue get results in Indian mines India’s Hindustan Zinc Limited (HZL) owner of the world’s largest zinc mine, is successfully developing its operations to meet future challenges and demands. A long-term partnership with Atlas Copco is helping the drive for more mechanization, higher productivity and increased safety. M&C reports on the progress so far.

The huge state of Rajasthan in the northwest of India is famous for its maharajas, historical  landmarks and stunning palaces. But in the mining world, this “Land of the Kings” is recognized as the home of one of the world’s leading zinc producers – Hindustan Zinc Limited.

HZL, a subsidiary of Vedanta Resources, is India’s powerhouse of zinc, lead,  silver and cadmium with an annual ore production in excess of 16 million tonnes extracted from five mining operations including open cast and underground mines.

But it is the Rampura Agucha and Kayad mines that are currently in the spotlight as the company moves to meet 21st century challenges in terms of efficiency, productivity and safety. And in this process, close collaboration with long-term supplier Atlas Copco is proving especially fruitful.

On target at Rampura Agucha

Rampura Agucha (RA), situated about 200 km southwest of Jaipur, the capital of Rajasthan, is widely acknowledged as the world’s largest zinc mine and the third largest open pit. Over the past five years this site has been gradually making the transition from open cast mining to underground operation.

Today, both techniques are in operation simultaneously with mining in the open pit taking place up to a depth of 372 m with a fleet  of Atlas Copco drill rigs including FlexiROC D50, D55, D60 and D65, while underground mining is carried out below this level. Together they produce some 6.25 Mt/year.

In the underground RA mine, much of the progress to date can be  attributed to the productivity and efficiency of the extensive Atlas Copco fleet including drill rigs Boomer 282, Simba H1354, Boltec 235H, LHD Scooptram ST1030 as well as Minetruck MT436B and MT6020.

In fact, progress is right on target. The company has deployed operators with international experience and proven skills and is now actively discussing deployment of automated machines for production drilling. The mine believes  that more mechanization and automation will increase the level of safety and precision, and thereby increase productivity and make the entire operation more cost-effective.

It is not surprising that Jain puts his faith in this fleet at Rampura Agucha as he has more than 30 years of experience of working with Atlas Copco equipment at other sites. In addition, he says constant interaction and dialogue between the managements of both companies has contributed to making the transition process smoother.

“We have been on a big learning curve together over these past few years, but now I think we have established  a win-win situation,” he says. “You could say that we have moved to the next level and are able to make use of each other’s competencies. Of course, now that the machines have clocked so many hours, there are new issues that will soon need addressing, but I have no doubt that Atlas Copco is geared to meet these fresh challenges.”

For example, wear and tear on the equipment and the safety of the operators is a top priority and will require close cooperation and innovative solutions in the coming years.

Con Panidis, Head of Underground Operations and Deon Joubert, Head of Engineering, both of whom work in the underground mine, advocate increased computerization as one way to improve safety in the mines as well as boost productivity. Another way is through training. “Training our operators is a never-ending process as the technologies are constantly being upgraded,” Panidis points out. Joubert adds: “Well trained operators is the key to minimizing downtime and keeping safety as high as possible.”

The lead-zinc deposit at Kayad is a greenfield project on the eastern fringe of Kayad village, 9 km south west of Ajmer city. When fully developed, the mine is scheduled to produce one million tonnes of ore per year. The geology here is characterized by gneisses and migmatites with overlays of quartzites, calc-silicates and quartz-mica schists.

Though mining at Kayad has been a relatively smooth process compared to other HZL operations in Rajasthan, Associate General Manager, Balwant Singh Rathore, says there have been some challenges. “The initial mine development got under way in 2010 and in the weak strata where the whole portal excavation had to be done by shovel and truck without the use of explosives,” he explains. “In some places, a rock breaker was used to loosen the hard rock. Furthermore, the decline, which is 70 m long, was also achieved without blasting.”

Another challenge was to control the maximum charge per delay to minimize disturbance to nearby inhabitants. The result was that it took about 20 hours to complete one work cycle. Today, with a decline depth of 250 m in place, mechanized equipment has taken over and one cycle takes approximately 975 minutes (16.25 hours).

“With the Atlas Copco machines we have today, we have not only added a lot of productivity but also given safety the importance it deserves,” maintains Rathore. “Volume, cost and quality are the three main parameters in the mining business, but safety is paramount. In this respect, the Atlas Copco machines have been doing a good job, and that goes for the maintenance of the machines, too.”

Kayad employs the sublevel stoping mining method and uses a fleet comprising Boomer 282 face drilling rigs, Scooptram ST1030, Minetrucks MT436B and MT5020, and Simba 1254 long hole drill rigs. The Simba 1254 rigs, which are the main production units, are specially adapted for the mine’s small to mediumsized drifts and equipped with tophammer rock drills for drilling 51–89 mm holes. The rig’s versatile positioning system enables them to be easily matched to a variety of production drilling tasks including ring drilling at various angles, parallel holes  and raiseboring for small diameter raises.

Although these machines have performed well, Rathore says a higher level of automation would be welcome. “More mechanization and automation will bring more safety and precision, thereby increasing productivity and making the entire operation more cost-effective.”

Atlas Copco provides both mines with service contracts for maintenance of the machines based on Cost Per Hour (CPH) and for rock drilling tools on Cost Per Meter (CPM). In the first case, Atlas Copco supports the equipment on a 24/7, 365 days a year on a three shift per day basis. This includes maintenance crew, planning and stocking of spares and logistics operation on each mine site. For its part, HZL provides workshop facilities, lubricants, operators, store, office space and accommodation.

Elaborating on the CPM contract, Sanjay Singh, Business Line Manager, Rock Drilling Tools at Atlas Copco, says: “Cost per meter of drilling is the real measure of the underlying value of rock drilling tools. After six months of trial, HZL found our cost-per-meter to be much lower than their earlier way of buying, and they were also relieved of the burden of maintaining inventory, monitoring performance, identifying training needs of operators, and so on.”

As a result of the CPH agreement, the mine does not have to invest in inventory planning, ordering, logistics, stocking of parts/components as well as the expertise needed to maintain the equipment.

To ensure that the maintenance models work smoothly, Atlas Copco has set up a regional Distribution Center and a Training Center at Bijaynagar, in the Ajmer district, providing Atlas Copco parts to all HZL sites across Rajasthan as well as training for operators using simulators.

At present, the center offers simulator training for Boomer and loader operators with the aim to increase productivity at the mining sites.

As Sanjay Ahuja, General Manager at Atlas Copco, says: “Prior to these service models, HZL had experienced maintainance of machines by their own workforce followed by an annual maintenance contract whereby the equipment supplier would guarantee machine availability but parts stocking was the responsibility of HZL. However, HZL wanted to move ahead up the value chain and desired a ‘single point responsibility’ from the supplier. Accordingly Atlas Copco was asked to take full ownership of underground mining equipment for its economic life time and provide a guaranteed cost of operation (parts and labor) for the entire period apart from ensuring Machine Availability of 87% in Year 1, 85% in Year 2 and 82% in Year 3–4 and 5. This was how CPH was born.”

K C Meena, Unit Head, Kayad Mines, emphasizes the need for more automation to make the operations safer, more productive, and more profitable. “Bulk mining is the order of the day,” he says, “and therefore computer controlled equipment is what will take mining into a new dimension here in India.”

Jain adds that the current transition from open cast to underground mining in Rajasthan is just one example of a growing, global trend.  “Fortunately, large sized equipment is now possible for underground mining and that’s helping a lot,” he says. “In addition, development of competency levels and a continuous engagement with local communities are also some of the other factors that are now a central part of our industry.”