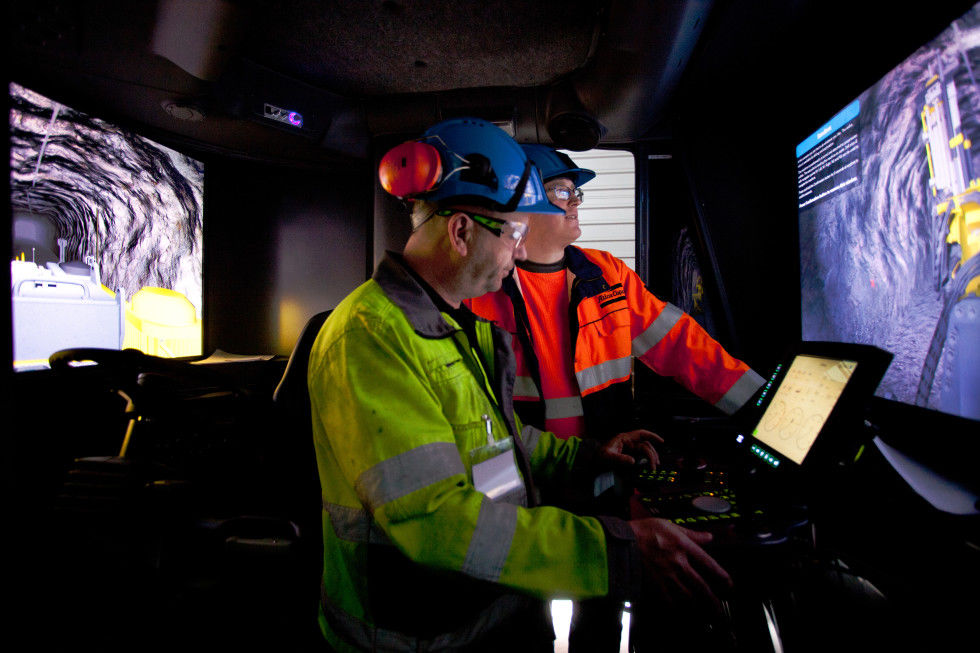 Underground Mining
Personal trainer: Trainees are instructed at every level on how to perform drilling procedures in the simulator with no impact on the mine’s actual operations.

Boliden Tara Mines is in no doubt about the positive impact that systematic training of equipment operators and maintenance personnel can have on efficiency. So much so, that it has made training a fundamental element of its business strategy.

Boliden Tara Mines in Navan, Ireland, has been producing lead and zinc for almost 40  years, and in recent times has experienced many of the classic challenges of an older, deepening underground mine.

Realizing that it needed to adapt its operations to address these challenges, the management team made two major strategic decisions. The first step was to restructure the organization towards a ‘one mine concept’, instead of the previous three-area concept, each with its own self-contained mining teams. The second was to step up its personnel training program in order to enhance skills, work smarter and establish a climate of continuous improvement.

Atlas Copco, which supplies Boliden Tara Mines with mining equipment, was also chosen to be the mine’s partner in training development. Mike Lowther, Manager of Mining, says the new direction was essential in order to maximize efficiency and flexibility.

“The deeper we go into the mine, the tougher the logistics get,” he says. “We can’t do anything about exchange rates, metal prices or orebody grades but we do have the ability to control the efficiencies of our mining and our costs. Mineralisation is only ore if you can mine it profitably – to turn it into ore, the mine has to be economically viable.”

Over the years, the mine management has stressed the importance of enhancing skills and has worked closely with the local mining unions to achieve this. This work has now moved into a more intensive phase as an increasing pool of cross-skilled operators and maintenance staff pass through the Atlas Copco Drill Rig Simulator Training Program.

Cross-skilling focuses on training the miners to operate groups of machines with similar functionality, such as Atlas Copco’s underground production drilling and bolting rigs. The first training program took place in 2013 and was an immediate success.

The second was held earlier this year, and here too, the results appear to be having an even stronger impact on operations. In preparation for the 2015 course, the mine and Atlas Copco formed a strong project team led by Seán Gilmore, Training Coordinator at Boliden Tara Mines, supported by Damien Healy, Atlas Copco’s Service Manager in Ireland.

Gilmore took on the instrumental role of Simulator Training Planner, making sure that all the preparations were in place prior to the delivery of the simulator. Strong backup was also received from the mine’s electrical and IT sections.

With just four weeks from go-ahead to implementation, it proved an intensive process. All trainees had to be registered with the simulator training software and system, email training accounts had to be set up, the surface training area had to be upgraded and, most importantly, the schedule had to be coordinated with the mine’s shift pattern. In addition, the schedule had to be adjusted around the trainees’ holidays and shift rotas to achieve the target of 24 craftsmen and 24 drill rig operators to be trained and cross-skilled.

A total of 56 trainees took part, an increase from 32 in 2013. Once the schedule was in place, Mike Hall, normally Shift Boss at the mine, was appointed NPIC (Nominated Person in Control) for the 2015 project. Hall’s role was to ensure risk assessments were completed for the preparation and installation of the simulator on site, communication of the schedule to each trainee, and liaising with the Atlas Copco trainer.

The program included both computerbased introductory training as well as operator training on the simulator, depending on the skill level of the trainee. Trainees with broad experience of the drill rig machine group used the opportunity to fine tune their skills, while operators in the early stages of cross-skilling gained an understanding of the functioning of the rigs in the computer programs. The computer-based training covered the following five modules, each with ten categories:

A pass rate of 80 percent is required at each stage to progress through the training levels. The trainees spent three to four hours studying topics such as voids, cracks, rock hardness and more, as well as common issues related to rock mechanics, rotation feed and impact.

They also learned how guages react to changing rock mechanics and, in turn, the stress impact on the equipment. As one operator commented: “Seeing the basics of rock drilling tools, along with why and when the different drills are used, was interesting and relevant.”

With all the original components and controls in the cab, the simulator perfectly replicates a mine and the Boomer, Simba and Boltec rigs while offering a variety of scenarios that increase in complexity, from safety and start-up procedures to advanced performance. At each stage, the trainees were instructed on how to carry out the actions required.

Mike Hall points out:  “After each trainee passes the training program, a printed report is added to their training records as part of the internal licensing process we have in
place.”

The efficiency saving for the mine is highlighted by Gilmore and Hall’s belief that if an operator who is not familiar with mining equipment were to spend two days on the simulator training program, the time spent is the equivalent of three to four weeks ‘buddy training’ underground on a real machine. While the mine is not able to change the fact that it is aging and deepening, its determination to change the way it works through restructuring and its choice of innovative training methods, has led to clear efficiency gains.

Mike Lowther concludes: “The reorganization process proves that the more efficiently and cost-effectively you can do things, the more marginal mineralization can be mined, thereby adding to the potential to extend the life of the mine. “Training is an important part of our focus on decreasing operating costs and Atlas Copco’s Simulator Training Program continues to form part of Boliden Tara Mines’ plans for the future.”