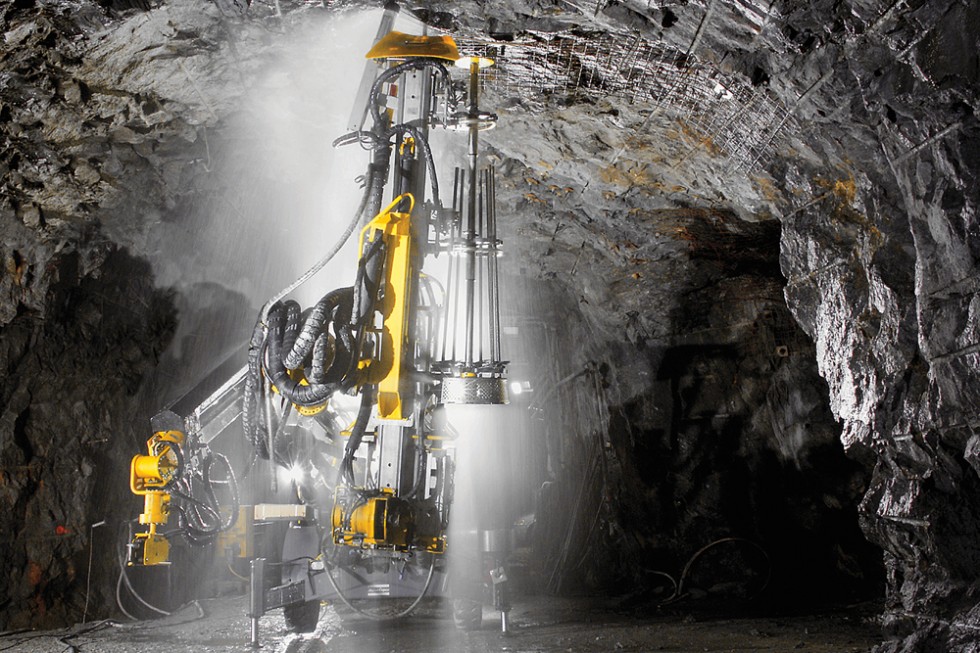 The Small Mine Development (SMD) underground mining company deploys small, efficient teams to its clients’ mines. Each team, such as the one currently based at Newmont Mining Corporation’s Exodus gold mine near Carlin, Nevada, USA, contracts for safe and productive underground mining solutions—including everything from planning, exploration, development and extraction, to shutting down a mine at the end of production. For Exodus, SMD is creating secure access to and from the client’s underground mining operations. They also contribute to production mining at times, serving as an on-site expandable workforce in a pinch.

So far the SMD team at Exodus has drilled, blasted and excavated the ramp for the mine, which declines 11,000 feet, dropping at 12 percent grade more than 1,200 feet in elevation below the site’s existing open pit mine. To secure the overhead rock and walls of these operations, SMD uses steel wire screen with Swellex bolts installed by a single Atlas Copco Boltec MC bolter with screen handling arm.

A lot faster
Steve Mathews is SMD’s Exodus project manager. Mathews said he discovered one day that it was more efficient to drill 8-foot blastholes in their 16-by-16-foot headings here. “Most people would say it’s crazy not to go the full 12 feet, but I noticed doing 8 feet, we’re able to muck and bolt a heading in under four hours and get the drill back in there. The faster we can get to drilling, the better.”

Taking 8 feet at a time creates a more efficient flow between the drilling and blasting, and the mucking and bolting phases. This has especially been working well at greater depths in the rock conditions at Exodus, where they have been getting up to three to four rounds a shift. This rhythm improved their advance on many shifts and, although an average doesn’t tell the full story, Mathews said their monthly shift average is about 30 feet per day. SMD has created over 27,000 feet of 16-by-16-foot development for the mine.

Learning curve
Mathews said SMD’s operators also had to adjust to how much faster the rig is compared to their previous bolters. He grinned, saying, “We have one older operator who learned he doesn’t have time to eat lunch between holes. This rig is faster, a lot faster.”

On average, he said, the Boltec cycles a Swellex bolt in less than two minutes. Setting as many as 35 bolts an hour is common.

Mathews said when they surprised new-hire C.J. Urie with the announcement he was to be the new Boltec operator, the promising young operator surprised them back. After one week operating the Boltec on his own, Urie was already averaging three rounds, or 110 to 115 bolts a shift. Mathews said a more experienced operator can get up to 200 bolts a shift but added, “Bolting three rounds a shift is just fine. We’ll definitely take that.”

Making the switch
SMD acquired its first Altas Copco Boltec in 2007 for a project at another location. Mathews, who has helped operators at two different mines go through the brand transition, said the Boltec’s computerized operation was new to them.

SMD General Manager Keith Jones said they had been aware of the Boltec and its reputation for performance but candidly admitted their first purchase was because “it was available.” Necessity had created an opportunity to try a Boltec, and the Atlas Copco store and service center in nearby Elko, Nev., provided one promptly.

SMD had no reservations about buying the Boltec, Mathews said, as the company had been interested in the Boltec’s advanced technology. “We like to keep up, having the best equipment possible.”

Automation
Atlas Copco’s Rig Control System (RCS) is an advanced electronics platform that allows a computer to monitor and govern nearly every function of the bolter, providing the operator with feedback on a full-color display panel above the console.

The Boltec’s automated drilling cycle includes electronic sensors that adjust to variations in rock conditions, optimizing rate of penetration and extending tool life. It properly inserts and expands a Swellex bolt to the prescribed psi. The system includes integrated diagnostics and fault location as well as a USB port to download drill settings and make performance information available for engineers and technicians.

Screen handling
The Boltec unit at Exodus has an optional screen handling arm that makes it unnecessary for personnel to work in an unprotected area of the heading. The operator performs screening and bolting from the unit’s FOPS-approved cab. The screen handling arm grasps a sheet of steel screen, then lifts, positions and holds it in place while the Boltec’s COP 1132 hammer drills the 8-foot hole. The cradle rotates to the injection and bolting indexes to install and tension a Swellex bolt from its 10-bolt carousel. The operator monitors performance on the display for each step. There are versions of the Boltec that can be operated remotely, as well.

From a guy who knows
It’s hard to find a more enthusiastic fan of the Boltec than shop superintendent, Danny Anderson. Mathews laughed as he described Anderson’s passion for the rig, “He believes it’s the best and will debate anyone who thinks otherwise.”

Anderson said he hasn’t had to do much other than typical hose replacement and oil changes. He explained that SMD prefers to spend the two hours it takes to tram the Boltec in and out of the mine for a thorough maintenance and steam-cleaning session than to keep it underground, removing any temptation to just keep it running. Other than regular cleaning and a thorough check once a week, Anderson said, “It’s been running or ready to run 24/7 ever since it got here.”

Mathews said the Boltec’s performance statistics and its ability to win over SMD’s operators have the company looking forward to future Boltec acquisitions as they increase their fleet size for additional projects.