Productivity gets a life with a new bucket design for Atlas Copco Scooptram loaders. The GIII third generation bucket also benefits from ground engaging tools (GET).

A new generation bucket that is lighter, shorter and faster and equipped with new ground engaging tools, has been launched by Atlas Copco to achieve higher productivity and lower fuel costs.

Tests of the new third generation bucket (GIII) and Ground Engaging Tools (GET), have produced top results. Operating time in the test muck pile was cut by 7% while fuel consumption was reduced by 8%.

“Like a knife through butter”
Throughout the test, the same loader and driver were used. Driver Totte Nilsson, who has been driving various types of loaders in different mines for 20 years, says: “I think this new GIII bucket is remarkable. Just upgrading your Scooptram ST1020 or ST1030 with the new GIII bucket is a great improvement, and if you equip the bucket with GET tools you gain even more.”

GETs are additional components that are bolted on to the front edge of the bucket, and sometimes also on the sides, in order to increase the bucket’s ability to attack and penetrate different muck pile formations. “The penetration is fantastic,” Nilsson adds. “It cuts like a knife through butter. With the previous bucket you had to go into the pile two or three times to fill it but with the GIII you only need one go.”

An added benefit is that the new bucket is more robust and can withstand extreme wear. Almost 50% of the material on each shroud can be worn off before it is time to change the parts. 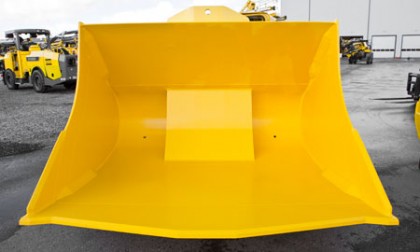