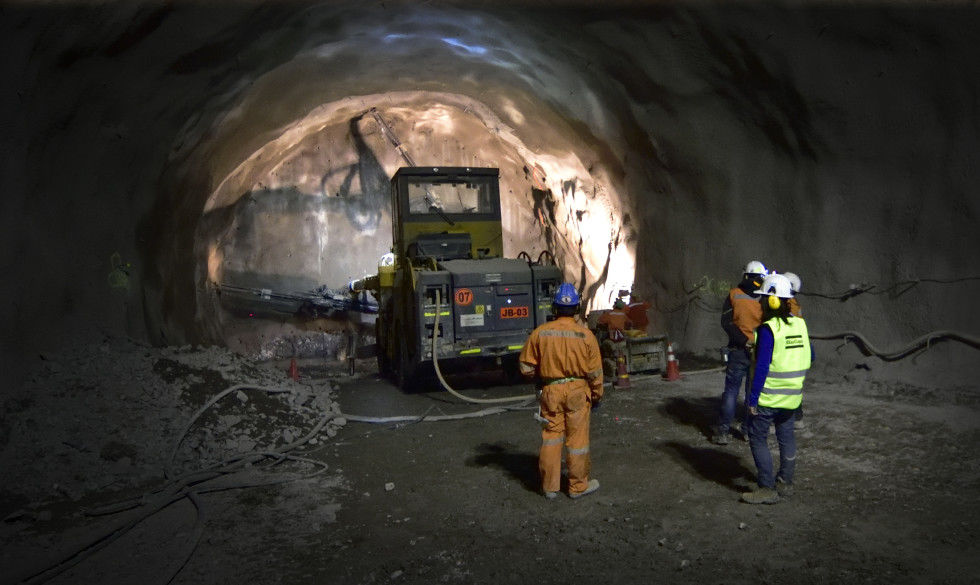 The transformation of a giant

Chile’s great Chuquicamata open pit mine is looking ahead to a new and prosperous future – underground.

After more than 100 years of production in what is now the world’s largest copper open pit, Chuquicamata is paving the way for a complete transition from surface to underground excavation.

The decision is due to depleting, profitable reserves and the increasing cost of additional waste removal as mining goes deeper. Added to this is the high energy cost of mining and transportation at this giant site which has grown to 5 km long, 3 km wide and 1 km deep.

Instead, Codelco Norte, the stateowned mining company, is going undeground where the “red metal” can not only be extracted from the rich orebody at lower cost but will also prolong the life of the Chuquicamata mine to 2060. The project aims to ramp up to full scale production by 2020 and development of the undground structure is making good headway. This first phase involves the construction of four tunnels, two for ventilation, one for access and one for transport. These total 20 km in length and are being driven by contractors Astaldi and Acciona Ossa, both using equipment from Atlas Copco.

For this phase, which started in 2012 and aims to be complete by year-end 2015, Atlas Copco has provided a fleet of Boomer XE3C and Boomer E2C drill rigs, Scooptram ST14 and Scooptram ST1030 LHD loaders as well Minetruck MT6020 trucks. In addition, Atlas Copco has established a Customer Center branch office in the town of Calama, about half an hour’s drive from Chuquicamata, in order to be as close as possible to the site, to provide technical, logistical and service support as well as training for equipment operators.

The second and main phase of the project, which starts in 2016, will involve the construction of no less than 100 km of tunnels and drifts. These will be used for production, material transport, ventilation levels and auxiliary facilities such as crusher stations.

Astaldi and Acciona Ossa say they are therefore well equipped and confident to take on this second phase alongside the two other contractors bidding for the project, Züblin and Geovita.

Astaldi’s current assignment is divided into three contracts: mine development, ventilation drifts and drifts for access and transport, all of which are on a huge scale.

Using its fleet of two Boomer XE3 C, one Boomer E2 C and two Boltec LC bolting rigs, the company is currently developing an access tunnel and a transport tunnel in parallel with 180 m between them.

In time, this will be equipped with a giant conveyor belt that will carry the excavated ore and waste to the surface. At the 4.5 km point, the tunnels will also be connected by a 2.5 m diameter escape shaft installed at an inclination of 70 degrees from the horizontal. Average advance in the access tunnel is 272 m per month, while the average advance in the transport drift is 245 m/month. Both 48 mm and 51 mm holes are drilled for blasting and 38 mm holes are used for the installation of rock bolts.

Luca Necchi, Project Director at Astaldi, explains the main reasons for his company’s choice of supplier. “When we won the contract for the access tunnels we started a close relationship with Atlas Copco,” he says. “We asked them to supply all of the drill rigs, and part of that deal was that Atlas Copco would give us continuous technical assistance in the field, and that’s exactly what we received. “However, that’s not the only reason we decided to continue working with them in the main tunnels. We also chose them for the  high availability of the equipment and the commitment of the Atlas Copco people towards this project, and because of that we work together as a real team.” Necchi also points out that his company works with Atlas Copco in other Latin American countries and is therefore well acquainted with Atlas Copco technology.

“Not all of our operators understand the technology used on the newer rigs so we have them  trained, firstly using simulators and then with Atlas Copco experts in the field,” he explains. “This field training is very important because well trained operators who know what they are doing are essential for safety. So are the RCS automated systems on the equipment which help to avoid human error and secure a smooth, efficient process. ” Necchi says productivity has yielded “very good returns” and adds “equipment availability has been pretty good  all along, mostly thanks to planned and preventive maintenance.”

The work is carried out in a demanding environment with steep inclines and substantial dust and high temperatures, which reduces the life-cycle of the components. Moreover, multiple faces are being excavated in parallel at the same time as the open pit is in full operation which occasionally causes logistical problems.

“This is a complicated, mega project and there’s just no room for disturbances or downtime. That’s a priority for us,” Necchi emphasises. “Atlas Copco helps us to maintain that priority. Hopefully we will win the next phase of the project and Atlas Copco will continue to be our partner.”

Acciona Ossa is currently developing two of a total of five ventilation drifts. Known as Tunnel 11 and Tunnel 12, these run parallel with 38 m between them. They have a cross section of 10 m x 8 m, a downward gradient of 13.8% and are 4 km in length. They will also be connected by three additional ventilation tubes of 7.75 m x 5.6 m. Tunnel 11 has been  advancing at the rate of 150 m per month and has now reached 1.54 km in length, while the record at one face was 245 m/month. For blasthole drilling, Acciona Ossa is using three Atlas Copco Boomer XE3 C rigs, two of which are in constant use with the third on standby. The rigs are equipped for fully automatic drilling (ABC Total) and are mainly used in the semi-automatic mode (ABC Regular). The blast holes are 48 and 51 mm in diameter. Drilling time at the faces between blasts is about 1. 45/hr including bolting, which is also performed by the Boomer rigs. Acciona Ossa’s contract has now been extended by 20 months requiring an expansion of its fleet with two-boom Boomer rigs  and Scooptram ST1030 LHD loaders.

David Jiménez, Contract Manager at Acciona Ossa, says the main reasons for choosing Atlas Copco was the reliability of the equipment and the continuous introduction of new technologies. “We had to work on this project for seven months using temporary equipment without navigation systems,” he explains. “But when the new Boomer XE3 C rigs  arrived it was a big turning point for us. Drilling of the rounds became much more precise and the overall performance improvement was remarkable. We managed to achieve an average productivity of 35 percent more than we had offered, reducing the timeframe for this project by almost one whole year.”

Acciona Ossa has also been testing Atlas Copco’s mine trucks to determine the most suitable capacity and has chosen the compact 60-tonne Minetruck MT6020.

Safety and operator training are clearly priorities for Acciona Ossa, too. “It’s part of our DNA,” says Jiménez. “Atlas Copco knows how to train the operators and to optimize the  team to get the optimum productivity.” This is a crucial issue for the project as a whole which will eventually involve some 3 000 workers.

Omar Allel, Atlas Copco’s Underground Business Line Manager, says the company is providing a “comprehensive and integrated solution, including everything from supplying  equipment and advising on the use of the automated drilling systems, through to service and training. “More than 50 operators have been trained prior to and during the project at  our Competence Center using simulators,” he points out. “Besides this, automatic communication with our Distribution Center allows critical parts to reach the teams quickly. We also supply the project on site with hydraulic hoses and rock drilling tools as well as a BQ3 bit grinding machine from Atlas Copco Secoroc.

Rodrigo Escanilla of Atlas Copco, sums it up: “The success factor for our customers has been the interaction, listening to their needs and studying each of the projects together. This has allowed us to design a comprehensive proposal based on recommendation of proper equipment for each application and rock conditions along with fast delivery of spare  parts, rock drilling tools and technical support.” This schematic view of the Chuquicamata site, shows the existing open pit and the preparations now under way to develop the new underground mine. The underground mine will comprise four production levels – a 7.5 km main access tunnel, five clean air injection ramps and two extraction shafts. The open pit currently has a depth of about 1100 m.

By the end of production in 2060 the underground operation will have deepened the mine by a further 800 m.

The underground orebody has been identified as a massive rectangle of approximately 600 000 m2. This is divided into four macro blocks, 200 to 250 m high. The orebody runs east–west and has a near vertical dip. It is estimated that it contains total reserves of some 420 Mt with a copper grade of 0.71%, of which just 1 700 Mt will be mined over the next 40 years.

To extract the ore underground, Codelco will apply the block caving method of mining. Ramp-up will take nine years after which the mine is expected to have an output of 140 000 tonnes of ore per day. At full capacity in 2020, it is expected to produce 45 Mt/year.