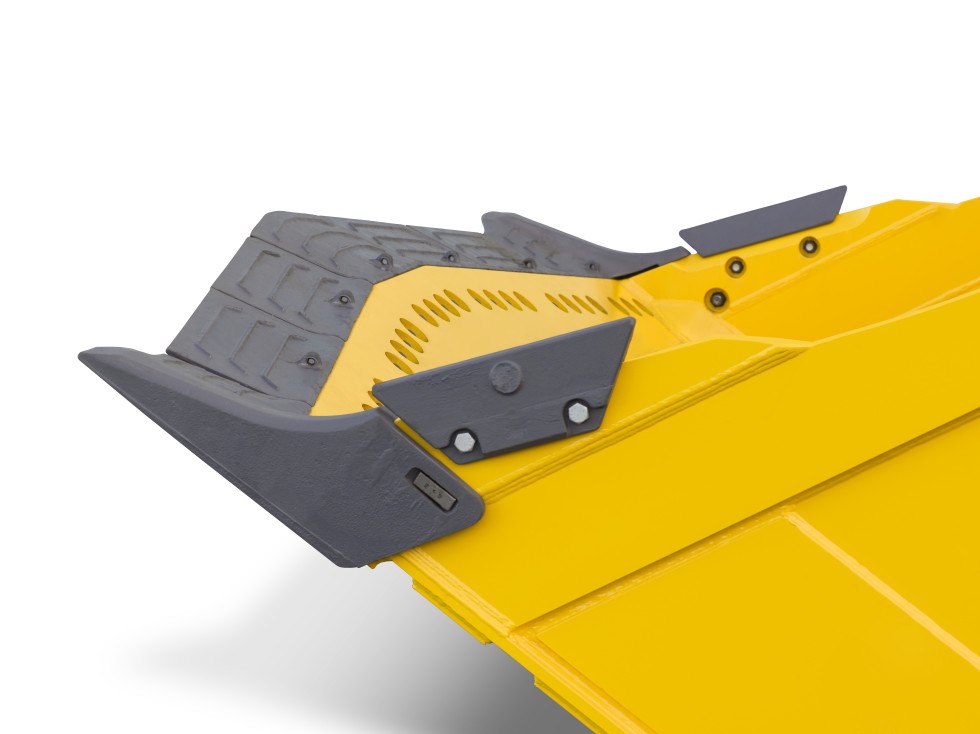 Swedes put upgraded Scooptram GET bucket to the test

With narrow drifts and a tricky combination of ore to contend with, Sweden’s Lovisa Mine was the ideal testing ground for the upgraded GET – a new Scooptram bucket with smarter and longer-lasting features.

The buckets mounted on LHD vehicles have an unforgiving task in mining as they are repeatedly driven into muck-piles with tremendous force. More research into how to make them stronger and longer lasting is welcome among mines, as was proven during a recent field test in Sweden.

First launched in 2010, the GET bucket features a flexible Ground Engaging Tools system. The  upgrade  project  included a number of key objectives: to improve penetration of the muck pile, extend the service life of the bucket, make repairs an easier process, increase productivity, reduce downtime and total cost of ownership.

Over a test period lastning 18 months, the GET bucket was put into action in a challenging environment – the Lovisa Mine, or Lovisagruvan, which is a zinc and lead operation near the town of Lindesberg.

“There  was  hardly  any  downtime  at all on the loader when they changed the bucket, so that was the first good sign,” says Jan-Erik Björklund, General Manager, Lovisa Mine, who has commissioned the upgraded bucket for full-time use.

The Lovisa Mine is located in a mineral-rich region of the country known as Bergslagen, north of Lake Mälaren, which has a long history of metals mining. It has an annual production of 100 000 tonnes of zinc and lead, including waste rock.

Due to the mine’s narrow drifts that measure just 3.5 m wide, loading and haulage is the most sensitive part of the production cycle. LHD vehicles also have to deal with tight cornering on all the ramps.

Another challenge is the mix of zinc and lead ore, with small quantities of silver, which can be difficult to muck out. This is why the Lovisa Mine proved an ideal testing ground for the upgraded GET bucket.

“Our Scooptram ST7 does most of the mucking out which usually takes four hours. This corresponds to roughly 160 tonnes of rock that are blasted in each round,” Jan- Erik Björklund explains.

The buckets are emptied directly onto haulage trucks at loading bays that are spaced 80–100 m apart. About 400 tonnes of material is mucked out and transported each day. Waste rock is also hauled back underground to fill the blasted voids.

The GET bucket has been designed to withstand extreme wear. The Ground Engaging Tools system mounted on the edge of the bucket gives it greater penetration through the muckpile, as noted during the test by operator Peter Johansson.

“We were surprised to see there was hardly any wear and tear after six months. This is a huge difference from the previous bucket where the edges wore down faster. It had to be repaired a lot sooner,” he says. “Also, with the old bucket you could really tell when it was getting worn. The action just got slower when attacking the muckpile. This hasn’t happened with the new GET.”

The improved penetration of the bucket is the result of a more robust steel composition used in the manufacturing of the bucket. This has also led to longer service life which was recorded as an improvement of 30–40 % during the test.

In contrast to conventional buckets, the bottom edge of the bucket, which first comes into contact with the muckpile, has been divided into removable segments. This means that repairs can be carried out on specific parts, the corner shrouds for example, giving cost benefits as a complete overhaul is no longer needed.

According to Stefan Nordqvist, who has more than 20 years of loading experience, maintenance is now “a question of hours instead of days.”

“On the GET bucket we can change side cutters in less than an hour and get the loader back up and running. Welding is no longer needed and that’s a big relief,” he says.

Most mines have understood the benefits of using Ground Engaging Tools according to Johannes Turesson, Product Manager, Atlas Copco: “The bolt-on wear parts require a fraction of the time to be replaced compared to welded wear parts,” he says.

Bolted instead of welded

Unlike most standard buckets, the GET system is bolted together which enables operators to easily deal with maintenance issues. Moreover, it significantly reduces downtime for the Scooptram loaders while the bucket is being repaired. The report from the Lovisa Mine notes that it took 50 minutes for two workers to change wear parts.

With better penetration, less force is also needed to move the bucket through the muckpile, which cuts energy consumption, reduces wear on tires and improves the working environment. Other key results included an even wear and tear on the bucket which helps to maintain peak level performance despite extensive use over long operational hours.

“The sense of newness stays much longer with the GET bucket, and that’s a good feeling,” concludes Stefan Nordqvist”.