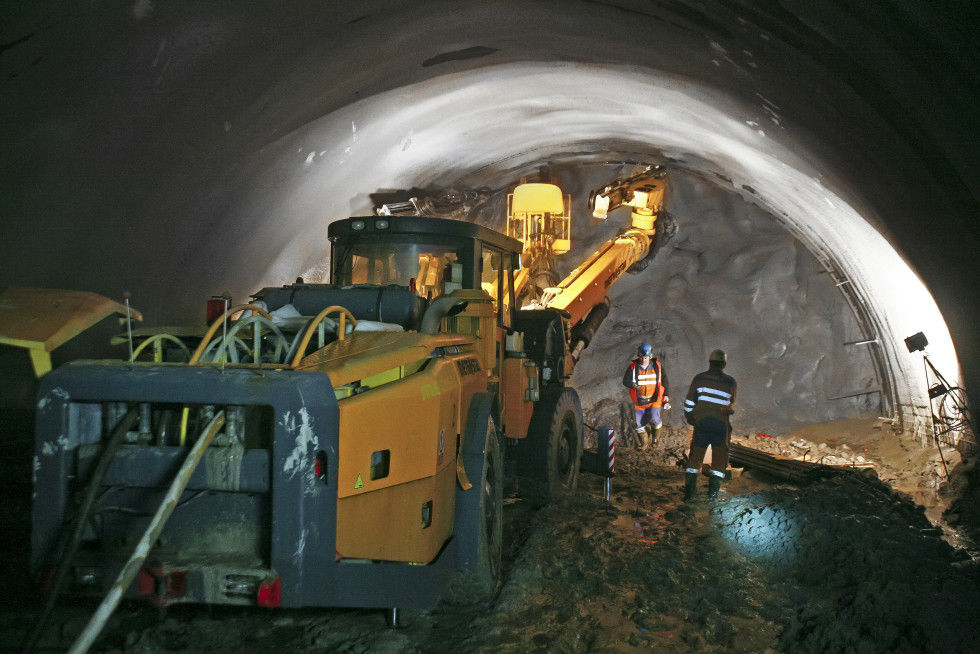 Underground Mining
Tunneling at Pol'ana is being carried out 7 days a week with two 11-hour shifts per day.

From November 2016 the Pol’ana tunnel will be the first road tunnel that motorists will pass through as they drive from Poland into northern Slovakia on the D3 highway.
Located in the Cˇadca district of the Žilina region, the Pol’ana tunnel is part of a 13 km stretch between the towns of Svrcˇinovec and Skalité. This section includes two tunnel projects, Pol’ana (898 m) and Svrcˇinovec (445 m) as well as 17 bridges including what will be the highest bridge in Slovakia.

Once completed, the new high-way will reduce driving time from Svrcˇinovec to the Polish border. In addition, it will substantially reduce the impact of traffic and improve the environment for nearby communities. Funded by the European Union and the Slovakian state, the project is esti-mated to cost €329 million and is being undertaken by a consortium of four con-tractors – Váhostav, Doprastav, Strabag and Metrostav. The Pol’ana tunnel itself has an esti-mated cost of around €29 million and is being built as a joint venture by Czech company Metrostav and Slovak company Doprastav.

Excavation at Pol’ana started in July 2014 and the tunnel is to be completed in August 2015.The tunnel will have a cross section of approximately 105 m2 and it will have a single tube with one lane going in each direc-tion. There will be two one-side emergency bays, an escape gallery (or support gallery, which in future may become a second tube), plus three access passages connecting the support gallery with the main tunnel.
Excavation started at the western portal from where about 350 m of top heading have been driven so far, including the excavation of 250 m of bench and 155 m of invert. “Still, advance has been slow due to the highly complicated geological condi-tions,” says Jirˇí Brˇichnˇácˇ of Metrostav, Site Manager at Pol’ana.
The geology in this part of the country also includes the Carpathian Flysch, char-acterized by alternating layers of claystones and sandstones in different stages of weath-ering and tectonic damage. This means that even though the tunnelers use the New Austrian Tunneling Method (NATM), they are also obliged to frequently change exca-vation method.
“In some sections of the tunnel, where we have more competent rock, we use drill and blast and in the sections where we have soft rock, we use hydraulic hammers on excava-tors.” he says. “But there’s no consistency. Every step is different and takes a long time. We have prepared for every eventual-ity with explosives for the hard rock and self-drilling anchors for the soft material.”
In the sections with more competent rock, an Atlas Copco Boomer E2 drill rig is used to drill the blast holes. “We try to go through two blasting cycles per day but it depends on the rock and is not always pos-sible,” Brˇichnˇácˇ continues, explaining that the work is carried out seven days a week with two, 11-hour shifts per day.
The drill rigs are also used to drill holes for the 9 m long, 51 mm diameter self-drilling anchors that are installed in an umbrella pattern to support the tunnel face. “We only use self-drilling anchors because the material we will be drilling in varies so quickly and so dramatically,” says Brˇichnˇácˇ. He adds that when drilling holes for installation of the anchors, the drill rigs sometimes work non-stop for 11 hours.
When working in the soft rock, Atlas Copco’s MB 1700 hydaulic breaker mounted on an excavator is used. A smaller, single boom Boomer 281 drill rig is used in in the adjacent support gallery and Atlas Copco Secoroc supplies all of the rock drilling tools. “We have a high con-sumption of drilling tools, especially the drill bits, as the rock is very abrasive,” says Brˇichnˇácˇ.
For concrete spraying work, two Potenza concrete spraying units from Atlas Copco MEYCO are used in addition to wire mesh, steel arches and the self-drilling anchors Excavation of the eastern portal is due to start in May 2015. “The idea is to eventually have the same setup for drilling, shotcret-ing, excavating and loading in both tunnel headings,” says Brˇichnˇácˇ.
The larger rigs were supplied by ISOP, Atlas Copco’s distributor in Slovakia and, together with Atlas Copco in the Czech Republic, help to keep the equipment up and running.
“Daily service of the machines is done by Metrostav but we have a contract to ser-vice the equipment after they’ve worked a certain agreed number of hours,” says Pavel Jindrácˇek, Product Manager for Atlas Copco Central Europe.“ The hours differ depending on the type of equipment and we carrry out the larger repairs and more complex servicing.”
Brˇichnˇácˇ concludes: “This is a very com-plex project, but I believe both the D3 high-way and the Pol’ana tunnel itself, will make a great contribution to this country’s trans-port network.”