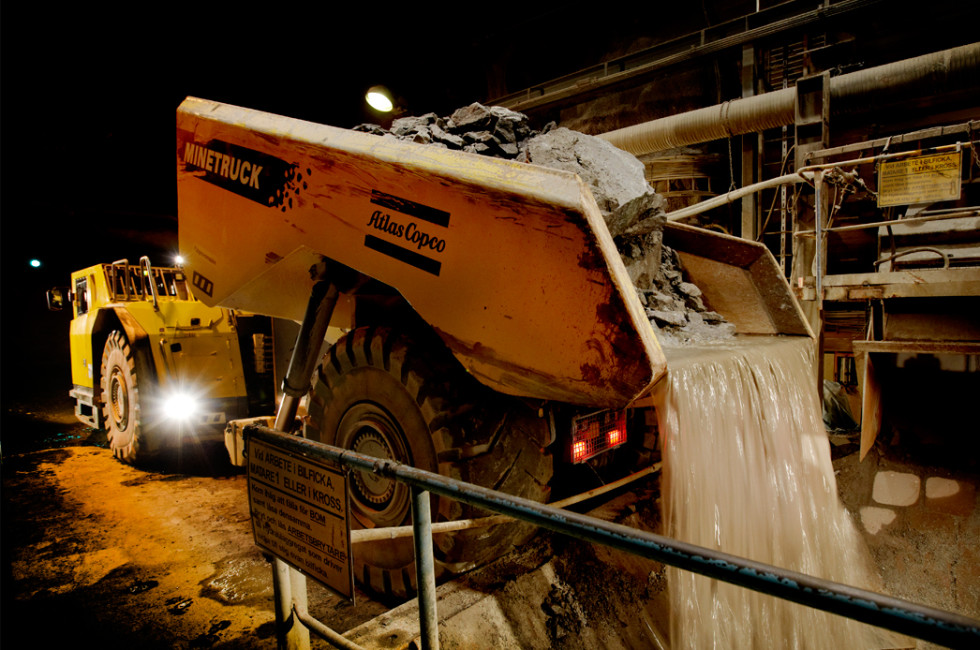 Underground Mining
The new trucks load 42 tonnes which is a 40 per cent improvement according to Elving Långdahl, owner and President of Långdahls Åkeri AB.

The underground Garpenberg Mine in central Sweden is to establish a new haulage operation based on the dedicated Minetruck MT42 underground truck as part of a plan to almost double production by 2015.

A major project is under way at the Boliden-owned Garpenberg Mine in central Sweden to increase production from1.4 Mt to 2.5 Mt per year by next year, and as a key part of that plan the mine has taken the decision to revise its haulage strategy.

Until now, the mine, which produces lead, zinc, silver and gold concentrates, has relied on general-purpose road trucks to haul the ore to the surface. However, from 1 January these vehicles will be replaced by a fleet of Minetruck MT42 trucks developed and manufactured by Atlas Copco.

Local haulage contractor Långdahls Åkeri AB, which recently purchased four Minetruck MT42 trucks along with two Scooptram ST14 loaders, has been given the responsibility to optimize haulage operations at the mine for the next five years.

Elving Långdahl, owner and President of Långdahls, says: “This is a major investment for us. The deciding factor was that our Boliden contract is a relatively long-term one which means we can now replace the existing road trucks at the mine with trucks and loaders that have been designed and built for underground mining.”

Långdahls has long experience of transporting a wide variety of goods. It has also been trucking ore at Garpenberg before, but only on the surface between the mine and the processing plant. With its Boliden contract, Långdahls will now be “going underground” for the very first time.

Elving Långdahl continues: “Naturally, trucks that are specially made for the job are more expensive than general-purpose trucks, but they are also much more effective. By using the Atlas Copco equipment we are confident that we will be able to make the haulage operation in the mine more efficient than ever before.”

“The new trucks load 42 tonnes while the trucks that have been used up to now only take 28 tonnes. That’s an improvement of about 40 per cent which will make a big difference to productivity.” Tire consumption is also an important cost factor. As the tires on the Minetruck MT42 are adapted for the tough mining environment they also last much longer than standard road tires.

Another reason for choosing the Atlas Copco equipment is safety. Långdahl’s Lena Jensen, who will be in charge of health and safety for the 60 or so drivers who will be working in the mine, says: “The cabin on the Minetruck MT42 is FOPS/ROPS approved which means they are built to withstand rock falls and protect the drivers. In addition, the cabins are ergonomically designed and comfortable.”

During the latter part of this year, Atlas Copco will carry out a two-day training program for the Garpenberg haulage team at Långdahls. In addition to theoretical and practical training, selected drivers will also be given in-depth tuition on specific technology features such as the vehicles’ advanced control system.