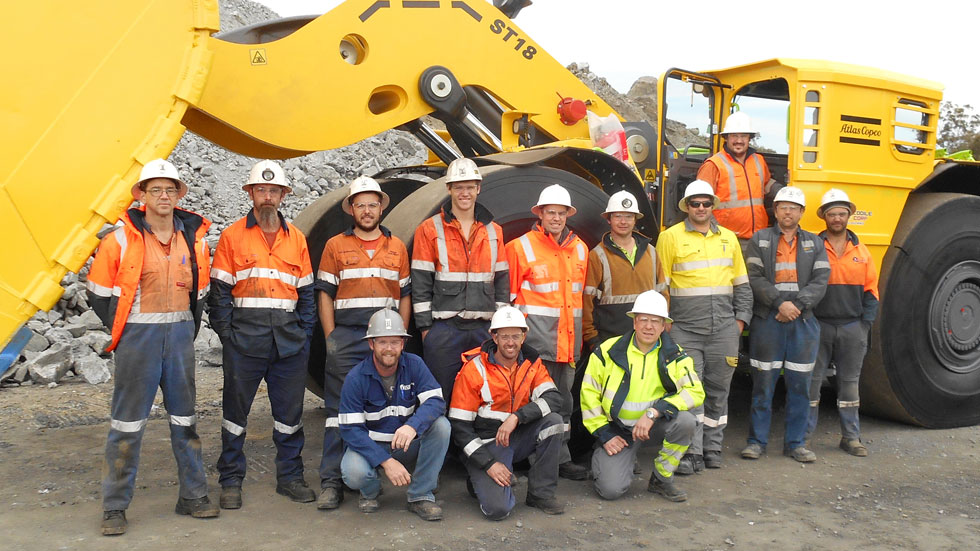 Underground Mining
The crew at the Stawell Gold Mine including Atlas Copco technicians and product specialist, proudly pose for a group photo with the new Scooptram ST18.

The Stawell Gold mine in Australia is the first mine in the world to take delivery of the newly launched Scooptram ST18 loader from Atlas Copco. Grant Wells, Underground Maintenance Superintendent, is optimistic about the new member of the fleet and its future contribution to production.

To say Grant Wells has seen a lot of change at the Stawell Gold mine in Victoria, eastern Australia, would be an understatement. One thing he probably didn’t expect to see was a machine that would change his view of the underground loader world.

Wells has been Underground Main­tenance Superintendent at Stawell for the past eight years and has worked under five mine owners. Current owner Crocodile Gold, based in Canada, has built a significant Australian gold production base around Stawell and Fosterville in Victoria, and the re-emerging Cosmo gold field in the Northern Territory.

At Stawell, upper-level remnant mining produced 141 126 tonnes at an average grade of 2.49 grams per tonne in the first quarter of this year and site output is about 40 000 ozpa.

Just arrived is the newly launched Scooptram ST18 from Atlas Copco, an 18-tonne LHD that Wells believes will establish a strong profile in the demanding Australian market.

“I see this as a big step in their [Atlas Copco’s] loader development,” said the 20-year veteran of mine equipment maintenance, supervisory and management roles.

“This unit promises performance levels that are up there with the benchmark levels in the industry. As far as I am concerned they are miles above where they were [with previous generations of Atlas Copco LHDs]. I think this is really something that is going to compete in the market.”

A first for Crocodile Gold

Stawell is the first to take delivery of the new Scooptram ST18 worldwide, and just ahead of leading underground mining contractor, Byrnecut with the second unit.

It was introduced as the most productive LHD in its class, and designed to efficiently load Atlas Copco’s market-leading 60-tonne capacity Minetruck MT6020. The two units share many common parts and control system components, which can substantially reduce the total cost of ownership.

The bucket and the unique boom design, combined with variable displacement pumps, provide safe and efficient operations. This, together with the proven

Atlas Copco Rig Control System, which monitors, supports and controls all aspects of the operation, results in superior muck pile penetration, less wear and tear on the machine and an overall faster and more productive loading cycle.

Atlas Copco has also been working with Stawell on operator training, with a purpose-built simulator that was on display at the Underground Operators’ Conference.

“This machine will be integrated directly into the fleet,” Wells said. “Operators will be changing from old loaders [of another make] to this new one so they must be comfortable enough to be able to change and perform the same operational functions without any issues.”

He adds that initial operator exposure to the cabin has been positive. “The first comment that we got from the operators was ‘Wow, this is so comfortable to sit in and operate’. That’s now got to be converted into a production environment of course, but early responses were good.”

The ST18 is a ‘smart machine’. Extensive onboard health and operating diagnostics can provide a real-time picture of the unit’s performance. An advanced RigScan audit service offers a non-intrusive look at the equipment’s running condition and performance, while the Remote Monitoring system can make production and maintenance data available through a user-friendly web interface.

“We’ll be doing full downloads on it,” Wells said. “We’ve got a Wi-Fi system in place so all of the information will be downloaded and displayed on the dashboard for operators and crews to view so that they can see what the machine has actually done for the shift, and previous shifts, how many tonnes it’s moved, and what its availability and utilization was. We’ll also have a screen in the muster room where that data will be displayed for the operators to look at each day. I think there will be some internal competition for sure!”