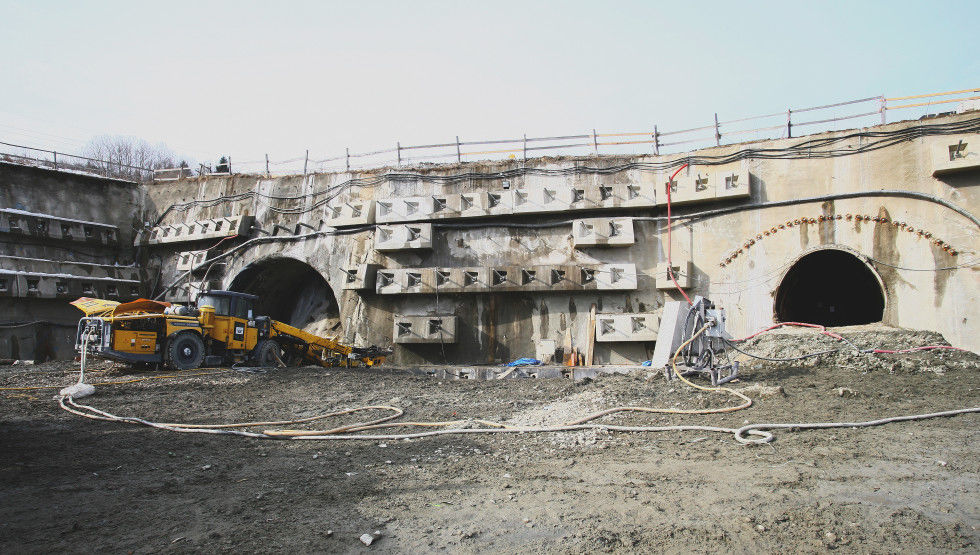 Underground Mining
View of the Ovcˇiarsko twin-tube portals at the eastern end.

OVCIARSKO – The challenge in the ground

The Ovciarsko tunnel in northern Slovakia is located on the D1 highway on the southside bypass of  Žilina. The D1 is part of the E 50 international transport route that runs from Paris via Nuremberg and Prague through Ukraine to Russia.

Ovciarsko is actually one of two tunnels (the other is at Žilina) that form part of a €427 million contract to develop an 11 km section of this vital international link and also includes 11 bridges and numerous access roads.

The contract for the entire section was awarded to a consortium of four compa-nies – Doprastav, Strabag, Váhostav and Metrostav. Doprastav is responsible for the tunneling and has subcontracted this work to Uranpres, suppported by its sister com-pany EKOFIN.
With plans to open in January 2018, Ovciarsko is designed as a twin-tube proj-ect, 2 367 m in length and is being driven simultaneously from the east and west.

More than 500 m have been driven from the west but excavation at the eastern end is behind schedule. Geotechnical problems brought work to a standstill soon after it began in August 2014, but was resumed in March 2015.

“From the geological point of view, this is one of the most difficult tunnel con-struction projects in Slovakia,” says Igor Jurik, Project Geologist at Ovciarsko. The northern part of the country is very mountainous, he explains, and soft rock, in particular a type of clay known as Flysch, is often encountered in the Slovak part of the Western Carpathians. In fact, this formation is so common that it is practically impos-sible to avoid.
Jurik continues: “We have two types of geology in the tunnel, an older type with fairly stable rock that is not too bad to work in, and a younger type of Flysch, which is a nightmare.” Flysch is characterized by low strength and high porosity. It also disinte-grates in contact with water and swells.

In addition, the geology frequently var-ies along the entire tunnel alignment. At the western end, the first 300 m was fairly stable, but then began to fluctuate every few meters. This has forced the company to constantly switch methods; drill and blast in the good formation, hydraulic hammers and excavators in the poor quality ground.
Having to change equipment and crews every few meters to deal with these varia-tions is tough, to say the least. As a result, the rate of advance can be anything from 0.5 m to 2.5 m in a single production cycle.

“The right technology has to be used depending on the geology so it’s not pos-sible to use just one method. We have to adapt to what we find,” says Jozef Valko, Senior Construction Manager, adding that this situation also places high financial demands on the project.
“At first, we thought we would only be able to use drill and blast for about 20 to 25 percent of the tunnel,” he says, “but now we expect this to rise to 50 to 60 percent.” That’s good news for the overall advance-ment of the project. For drill and blast in competent rock, two Atlas Copco Boomer E2 drill rigs are used. These are equipped with COP 2238 rock drills as well as rods, shank adapters and bits from Atlas Copco Secoroc.

The rigs are also used for portal stabiliza-tion work to install the Atlas Copco Secoroc Symmetrix system. This method involves the installation of steel pipes or casings, set in an umbrella pattern in the crown, providing extra support ahead of drilling and blasting.
The crews work seven days a week with two 12-hour shifts per day. In each shift, they try to get through a complete cycle of drilling and blasting the top heading and bottom bench of the face, although this is not always possible. This does not mean that the drill rigs have to stand idle, however. When they are not drilling blastholes they are drilling holes for rock bolts. The bolts comprise grouted, hydraulic and fibreglass variants as well as self-drilling anchors.

When installing the SDAs – a common solution for unstable ground such as sand, gravel, silt, and clays – two Atlas Copco M400NT Mai pumps are used for the injec-tion grouting. Wire mesh is also used. Another key piece of equipment used for rock support is the Atlas Copco MEYCO Potenza unit for wet mix concrete spray-ing, and there are two of these in operation. MEYCO was acquired by Atlas Copco in April 2013 from chemical giant BASF Construction Chemical and this represents state-of-the-art concrete-spraying technol-ogy. Coincidentally, BASF also supplies ground support at the Ovciarsko site.
When working in the soft rock, the team switches to MB 1700 hydraulic breakers from Atlas Copco mounted on excavators. Ventilation is provided by two high pressure Atlas Copco Serpent fans together with 2.4 km of high quality PVC-coated ducting. All of the equipment is supported by a service contract which is managed by ISOP, Atlas Copco’s distributor in Slovakia, headed up by Jozef Parobok.

ISOP has a stipulated response time of two hours and workshops at both western and eastern portals. The larger of these at the eastern portal can accommodate the Boomer E2 drill rig, and there are con-tainers on site for spares and consum-ables.