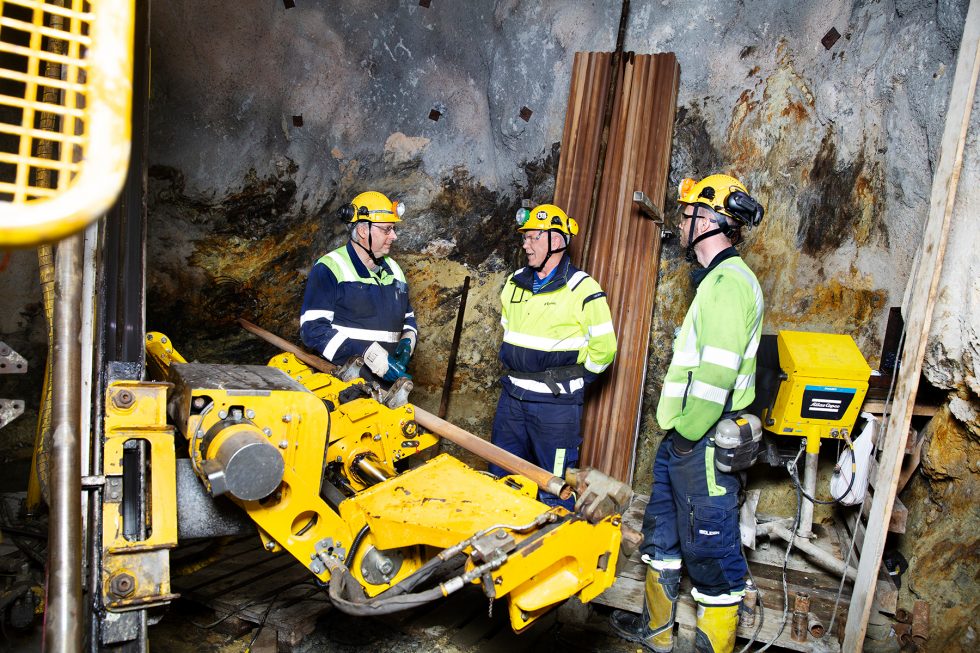 Diamond drilling was difficult work with far too many injuries. It was clear that a better working environment was needed. So Boliden and Epiroc decided to develop diamond drilling together. The result was – amongst others – a new rod-handling system which meant that dangerous injuries are now more or less eliminated.

“Previously, diamond drilling workers retired on medical grounds aged 50, because of damage to the neck and shoulders. They worked in awkward positions, which was not good. Now it’s much better”, says Ingemar Larsson.

The link between Epiroc and the Boliden mine at Kristineberg is strong and was primarily created by Ingemar Larsson, Sales Engineer at Epiroc, who has worked in the mining environment for most of his professional life.

As Boliden aims to be at the forefront in technology, and especially in anything which can improve the working environment for its personnel, the collaboration is beneficial. Ingemar Larsson knows that Boliden is not afraid to try new things and is pleased to help with personnel and production during the trial periods of new machines.

Thomas Theolin is the Planning Manager for the Kristineberg mine. He agrees with Ingemar Larsson about the importance of being a leader in terms of working environment.

“We have been focused on the working environment for ten years now. We are interested in trying new technology to create a safe workplace. If anyone is injured, it is difficult to get over it, and we want to offer an attractive workplace”, he said.

He believes that serious injuries have more or less disappeared, and that the rod handler has been a great help.

The development in mining machinery has been slow in certain areas, and there is a feeling that there is still a lot to do.

The Diamec Smart 6 core drilling rig is an excellent example of the collaboration between the two companies. Boliden was involved as early as 2000 when the rig was still a prototype, and tested the machine.

Because it is equipped with a rod-handling system, the operators can carry out heavy lifting in a more ergonomically correct way.

The machine also has barriers which prevent contact with rotating parts. Trap injuries have reduced and the working environment has been considerably improved.

The most important machine in the mine

The development in mining machinery has been slow in certain areas, and there is a feeling that there is still a lot to do.

Thomas Theolin believes that the industry must set standards. That was what happened with diamond drilling, and why Epiroc chose to concentrate on the product development of the core drilling rig.

“This is the most important machine you have in the mine. It’s very important to be able to plan and work correctly, optimise extraction, grind dead rock or avoid wrong angles when mining”, says Ingemar Larsson.

The reason why, until a few years ago, there was not such a strong focus on this work sector and its environment, he believes, is that it is a relatively small part of the business.

“There are some people involved. They may only be a few people, but something still has to be done – they need a good working environment.

Diamond drilling is vital for the mine

Now great importance is placed on the diamond drilling workers, as they are the ones who will secure the mine’s development. Before, the focus was on driving ore, but now diamond drilling has priority as test drilling for finding more ore in the rock, since its discovery is decisive for the existence and survival of the mine.

“We have great hopes for the future,” says Thomas Theolin.

Joel Larsson is the Works Manager for diamond drilling in the Kristineberg mine. He began as a drill operator in 2017, but now works mainly above ground to manage the team which consists of 12 people. He can see how the rod-handling system makes work easier for his colleagues.

Towards a self-sustaining future

“In the future, we may have a machine which you can in principle monitor from an operating unit which the staff service as necessary. It need not be on the rig”, says Ingemar Larsson.

“Then one person can keep two or three machines running simultaneously and keep an eye on them from the control panel”, says Joel Larsson.

“It will be a very different working environment from when the drill operator had a big diesel engine right next to his ears”, says Ingemar Larsson.

The Kristineberg Mine is situated at Kristineberg in the Lycksele municipality of Västerbotten, and is one of Boliden’s mines. The Sankta Anna underground church is located here.

The mine contains zinc mix, copper pyrites, lead sulphide, gold and silver. The ore from the mine is transported by road to Boliden’s concentrating plant in Boliden. When the ore has been concentrated, it is transported to the Rönnskärs plant in Skellefteåhamn.

The Kristineberg mine is 1300 metres deep and was opened in the 1940’s. Today, around 180 employees work there and around 70 contractors.

The Diamec Smart 6 is a core drilling rig for underground work. It is equipped with an advanced rig control system which allows automatic drilling from a safe distance. The operator can simply enter and monitor the drilling parameters on the touchscreen on the remote control panel.

The Diamec Smart 6 can be equipped with a rod-handling system which assists the operator and eliminates many dangerous operations during drilling work. The rig positioning system means that it can drill in all directions.