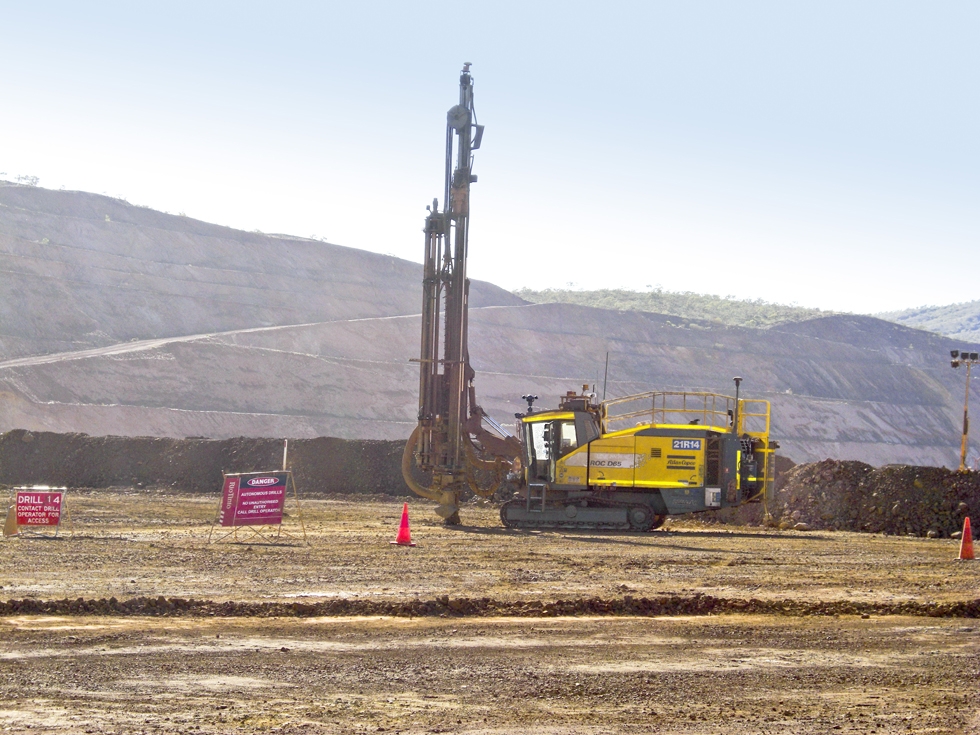 All eyes were on the monitor as the advanced, automated surface drill rig carefully moved into its starting position. Its task: to follow computer generate­d instructions to complete an entire drill pattern without human intervention.

The rig leveled and then started to drill, completing the first hole. So far so good. The rig then extracted its drillstring and trammed to the next row of holes where it repeated the cycle with equal speed and efficiency. Before long, the entire drill pattern had been completed, fully automated, without any human intervention.

The scene was Rio Tinto’s Technology and Innovation test quarry outside Perth in Western Australia. The rig was an advanced Atlas Copco SmartROC D65, and the result was a major milestone in fully automated production bench drilling.

Charles McHugh, Manager, Mining Disciplines at Rio Tinto, explained that the drill pattern had been pre-designed in the mine office and the drill was controlled and directed at the touch of a button.

The success of this project represents a first for the surface mining industry and a milestone in a joint development alliance that was established between Rio Tinto and Atlas Copco in 2008. At that time, Atlas Copco’s challenge was to develop an automated drill rig that could be integrated with Rio Tinto’s Mine Automation System (MAS), a system that provides the command and control of automated equipment at Rio Tinto operations.

Rio Tinto further developed the MAS system to remotely connect with the drill rig and these functions were put to the test as part of Rio Tinto’s Mine of the Future program.

Charles McHugh continues: “Atlas Copco and Rio Tinto worked together to ensure that the tasks assigned to the drill rig could be received and carried out in an automated fashion with the drill operator located in the office.

“We expect benefits both from a single operator being able to operate multiple drills and from flexible operation which will be possible between operators and potentially between operating sites. Importantly, however, we are also seeing improved drill utilization and consistency in drill outcomes, providing more accurate information for mine operation.”

Rio Tinto has a substantial program in place to develop automated systems for its surface mining operations which create safer and more efficient operations.

McHugh maintains that the alliance with Atlas Copco will accelerate the development and deployment of autonomous drilling solutions for the surface mining industry. “The benefits resulting from automating drills include improved operator safety, higher precision of the drilling process and improved equipment reliability, resulting in superior performance,” he says.

“For Rio Tinto, these advances are about achieving competitive advantage through step changes in mining that come from leadership in technology, starting with academic origin and resulting in a commercial outcome. Through this approach we’re changing the face of mining.”

He also says that Atlas Copco and Rio Tinto will continue to work on “other exciting drilling technologies through the strategic partnership”.

Tom Ross, Atlas Copco’s Surface Drilling Business Line Manager in Australia, says the test result is a landmark for the industry because it demonstrates the ability of the RCS (Rig Control System) software on board the SmartROC D65 to communicate with the MAS software, and complete drilling tasks effectively under instruction from a computer.

“Technology is the future in mining and I would like to think that Atlas Copco is at the forefront of that,” he says. “This is why the SmartROC D65 being able to do this is like putting a big flag on top of the hill saying ‘we’re the first’,” he says.

“The really clever part was the ability of the machine to navigate 15 holes,  three rows of five holes each, without any human involvemen­t, then drill those holes and  return to a waiting stance for further instructions.

“The MAS system ‘spoke’ to our rig, our rig understood the instructions and carried out the commands, rather than it being remote controlled. That is maybe the first time the MAS system has ‘spoken’ to control a drill rig.

“This is something we have been working on for three years, so this is the accumulation of a lot of work to get to this point. It’s been really satisfying that we were able to do it. For us it’s a world first on this class of drill rig, and for the alliance, it means that we’ve got the proof of concept completed.”