The team of the Hasselt-based BVBA Baldewijns & Co, demolition specialists especially in demolishing large concrete constructions and the removal of the rubble, faced a tough challenge: within the period of a single weekend, two 100 m long bridge sections of the E 313 over the A2 highway at the Lummen highway interchange had to be removed and the rubble cleared away.

On Friday evening, after having laid a sand bed to protect the underlying asphalt road, twelve excavators were put to work with heavy breakers and concrete crushers. The most powerful breaker on the site was an Atlas Copco HB 3000, 3000 kg in weight and suitable for excavators in the range of 32 to 50 tonnes. It is a robust tool that can handle heavy demolition jobs; a real production machine, 7 days a week, 24 hours per day.

A total of 4,000 m³ of concrete was demolished, sorted and removed, including 300 tonnes of reinforced steel. The job was completed in only 40 hours, far less than the scheduled time of 55 hours. This impressive result was primarily achieved by thorough planning with a sharp schedule, sufficient equipment, and, last but not least the 45 professional operators.

The starring role was played however by the newest concrete cutters from Atlas Copco: the CC 6000, equipped with universal jaws that made it possible to cut through and crush the bearing beams of the bridge and then cut through the heavy reinforcing bars.

The concrete cutters met the expectations completely.“We needed really heavy equipment to get this job done within the schedule,” says Steven Lisens, director of Baldewijns & Co. “The CC 6000 concrete cutters absolutely contributed to the smooth progress of the works and the smashing final result. The cutters had no problem at all with the size of the beams; its crushing power and high cycle time exceeded all of our expectations.”

The conclusion: “The performance and the reliability of the products from Atlas Copco have really convinced me. The results achieved with the CC 6000 and the HB 3000 have inspired us to purchase a new Atlas Copco HB 4700 hydraulic breaker.” 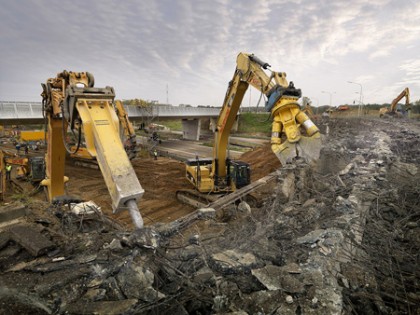