For the new layout of the junction of the Federal roads 297 and 29 in Lorch, Messrs. FWA Fischer Weilheim Abbruch GmbH & Co. KG were engaged by the Stuttgart Regional Council to demolish the old bridge on the B297 crossing the B29. The two-bay bridge structure made of reinforced concrete weighed 3000 metric tons. During demolition work any damage caused to the fully closed Federal road had to be avoided at all cost.

The demolition job turned out to be quite difficult because the bridge not only featured a longitudinal and transverse slope but also a curvature in a 280 m radius to the horizontal. Slightly offset and some 15 m below the bridge a passage for local residents’ vehicles had to be always accessible for rescue vehicles during the entire demolition period.

These conditions required a demolition concept to be conceived in which each single demolition step was described in detail to ensure that all demolition conditions are statically stable and never put people, machines and the environment at risk.

Work started with the full closure of the roads, the removal of the crash barriers and the protection of the Federal road B29 by an impact bed made of recycling material. This was followed by the demolition of the bridge carried out by the fleet of Caterpillar machines consisting of a wheeled excavator and five crawler-tracked excavators equipped with hydraulic breakers and CombiCutters.

For their attachments FWA Fischer Weilheim exclusively rely on the quality products of the Essen-based Atlas Copco company. They used a total of five model HB 3000, HB 4200 and HB 7000 heavy hydraulic breakers which were supported by four model CC 3300 U, CC 3300 S and CC 6000 U CombiCutters.

As the two HB 3000 were tearing down the 30 cm thick deck slab from above, the two CC 3300 U (U= universal arm) combi cutters and the CC 6000 U CombiCutters started to tear down the bridge caps. Then the bottom chords with a cross sectional area of four square meters of concrete were demolished by the two HB 4200 hydraulic breakers and the HB 7000. Once the longitudinal reinforcements were accessible, they were cut by the CC 3300 S (S = scrap cutter arm) into lengths suitable for an evacuation by container into which they were immediately loaded.

Once the entire bridge bay had been demolished, the CC 6000 U CombiCutter used its force and its 1,400 mm wide jaw to demolish the bridge abutments. The use of this large CombiCutter allowed the demolishers from Weilheim to tear down without major effort the one meter wide and heavily reinforced wing walls of the abutment. Afterwards the 7-ton hydraulic breaker was used to raze to the ground the actual abutment in no time at all.

„Without the use of the two large CC 6000 U and HB 7000 machines the strong reinforcements would surely have prevented us from making such good progress“ Max Bachteler, FWA Fischer’s site manager, is convinced. He was also very impressed by the availability of the hydraulic attachments: „ five hydraulic attachments working non-stop for 30 hours without failing a minute.“

Upon completion of the actual demolition work the concrete was conditioned on site on the Federal road and crushed in order to reuse it ecologically in other road construction projects.

The deployment of the effective Weilheim demolition crew and the use of the high-capacity Atlas Copco attachments allowed the Federal road 29 to be reopened to traffic much earlier than planned. 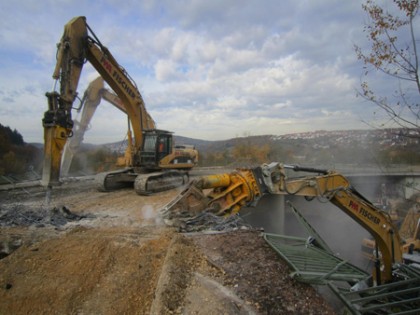