The panoramic restaurant on the Drachenfels, or Dragon’s Rock, above Königswinter in the Siebengebirge Natural Park on the River Rhine is being replaced by a modern glass cube. The whole plateau at the summit is being conditioned to accommodate growth in tourism. An Atlas Copco CombiCutter CC 2500 U has managed to demolish the old restaurant under difficult conditions.

To begin with, the access road to the restaurant was iced over for weeks, making it impossible to drive along. Once the road was clear again, the retaining wall along the road needed to be reinforced in parts to take the weight of the 25-ton CAT 323 D excavator and the CombiCutter. No rubble was permitted to fall down the hillside under any circumstances. As a result, the outside walls needed to be torn down inwards towards the excavator.

As if that wasn’t enough, time was also pressure on foreman Olaf Goldschmidt and his team from Dortmund-based Stricker GmbH & Co. KG. Demolition work had to be completed by the end of February due to strict requirements regarding the protection of nature and species.

Residents, visitors and the media also showed great interest in the progress of demolition work. “I have never had so many curious onlookers and representatives of the press on a building site,” exclaims Goldschmidt. “The work attracted enormous interest.”

The regional government will bear most of the costs of around eight million euros.

The team managed to complete all demolition work in good time. Construction will begin on a new restaurant in May 2011. Featuring a large glass cube design, the building will also boast a spacious forecourt for visitors. The remodelled plateau will be officially opened at Easter 2012. 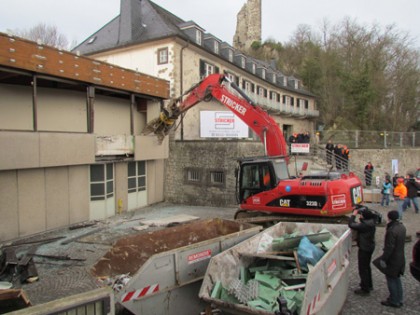