By using Atlas Copco pulverizers, Arcoenge of Butantã, Brazil, enables the reuse of concrete and rebar from the old Fonte Nova Stadium, in the Brazilian state of Bahia.

The refurbishment and upgrade of stadiums for the 2014 World Cup in Brazil are at full speed. LCA Consultancy’s estimates point out that a total of R$ 5.6 billion (2,6 billion Euro) shall be invested in civil works. This amount includes all refurbishing works and the building of a series of 12 stadiums from scratch. This infrastructure will provide a sports complex to serve many generations of Brazilians.

Since August 2010, the demolition of the old Fonte Nova Stadium, in Salvador (state of Bahia), one of the 2014 World Cup host cities in Brazil, relies on the technology of Atlas Copco demolition and bulk pulverizers, namely BP 2900, DP 2800 and DP 2000. The pieces of equipment encompass multifunctional features, the strength of hydraulic rotating engine, straight jaw shape and cutting blades similar to demolition clamps. These features, combined with a 360º rotation, make such equipment the right choice for sustainable demolition operations.

This is evidenced by the fact that the pulverizers used in Fonte Nova Stadium, besides handling the primary and secondary demolition tasks, also fully separate the rebars fixed to the original structure of the stadium. “The concrete is, then, reserved for crushing, and the rebars, directly for recycling”, explains José Virgilio Mazza Batista, production engineer of Arcoenge, the company in charge of demolishing the stadium in Bahia.

According to the expert, operating this kind of equipment became essential for the sustainable planning of the civil work, since it can pile concrete and rebars separately, enhancing recycling procedures. “The concrete demolished, crunched and piled by the pulverizers is sent to mobile crushers at the construction site, where it is crushed to the right granularity and cubic shape for use as foundation for landfills or asphalt beds,” Batista explains.

In the case of piled rebars, they are collected by a local organization and sent to multinational companies of the iron and steel industry. “Companies of this sector considered undertaking the demolition task solely in exchange for reusing the rebars, what was not possible because they lacked the right expertise and technical background in demolition,” said Marcelo Camargo, Atlas Copco’s business manager of the demolition tools division. He pointed out that the building contractor’s background is a key element in ensuring the good performance of the demolition equipment.

Together, the three pulverizers used by Arcoenge in the demolition of Fonte Nova Stadium can silently move around 150 m³ of concrete daily, as observed by Batista from Arcoenge. “The noise from crushing material is imperceptible against the noise of the 38-ton excavator, on which the pulverizer is mounted,” he adds.

The pulverizers were used until the last days of the stadium demolition end of December. After that they were forwarded to other Arcoenge’s construction sites, to show, once more, how it is possible to perform demolition in a responsible and sustainable way. 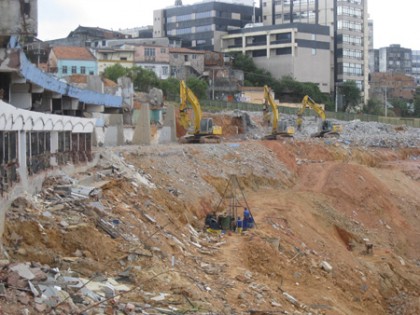