The time had come for the Lalbaug flyover of South Central Mumbai. Engendering immense public and media interest, the district’s landmark made way for a modern bridge on a grand scale. In spite of complex and demanding conditions, the demolition of the overstrained traffic artery occured much quicker than expected. In the centre of the action: two CombiCutters by Atlas Copco.

The 38 years old Sant Dnyaneshwar flyover, better known as ”Lalbaug flyover” by Mumbai inhabitants, was in a serviceable condition. Up to 15.000 vehicles per hour used the two lanes one way flyover – including daily traffic jams and environmental consequences.

This is why the responsible managers of the MMRDA (Mumbai Metropolitan Region Development Authority) and the BMC (Brihanmumbai Municipal Corporation) decided to “think big“: during a construction period of 18 months the urban feeder, covering a span of 2,1 km, shall relieve the traffic situation for a long time.

Of course, this project had to start with the demolition of the old flyover, a demolition under difficult conditions. The densely populated residential and commercial complexes around required some very concise approach: on a strictly confined area, avoiding noise and dust impact.

Furthermore the state government allowed only 25 days to execute the demolition works completely, including levelling and asphalting – a longer period of traffic obstructions seemed unacceptable. Therefore, just 10 days were left for the basic demolition itself.

As Simplex Infrastructure Ltd awarded this task, being aware of the limited time frame given, they sub-contracted the demanding job to Matte & Associates.

Convinced about the capabilities of Silent Demolition Tools by Atlas Copco, the company owner even accepted a delicate penalty in case of delay. Basically relying on a combination of two CombiCutters – a CC 1700 U which Matte already owned and a new CC 2500 U, specially ordered for this challenge – the demolition started duly at 9 am on May 5th 2009, including live TV coverage.

At the end of the first day, almost a quarter of the entire debris volume (5000 cubic metres) had been done. And after only six days the entire job – completed. Since both CombiCutters proved their efficiency, Matte and Associates also proved that they were right to decide to use them: Due to the remarkably undercut time limit, the company gained a bonus and presumably lots of reputation.

While authorities hope that the remaining works on the new bridge will continue with the same pace and accuracy, the devotees of the local Ganesh patron have already found their problem solved. In former years they had to cart their idol all the way around the old flyover during their annual procession. The Ganesh idol, carried on a trolley, had simply been too tall to pass the flyover’s height. Therefore it can be stated, in a certain way, that the AC combi cutters also made a contribution to the freedom and safety of thousands of devotees who attend the “Ganeshotsav” festival. 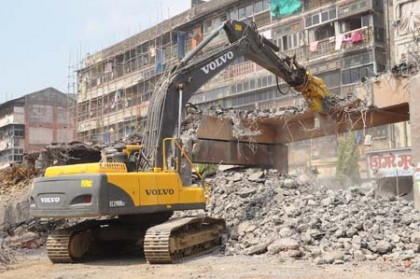