In Letter near Hanover a derelict office building had to give way to a car park. As soon as the local demolition company Gizyn GmbH found out that the steel trelliswork included solid I-beams, it was obvious that standard equipment was not the best choice to do the job.

After initial tests with a cable excavator and wrecking ball failed and blasting or the costly use of cutting torches were out of the question, the company turned to an individual solution meeting the specific demands by attaching an Atlas Copco CC 2500 S hydraulic Combi Cutter to a Liebherr R 954 Longfront. For this particular job the boom of the Liebherr excavator was limited to a length of 29 m to ensure that the carrier and cutter form a stable unit.

It took Atlas Copco’s Hanover Service Station only a few days to prepare the CC 2500 S for the forthcoming endurance test. Already one week later nearly half of the building had been demolished. The CC 2500 S produces a 300-ton cutting force (133 tons at the tip) and is therefore able to tackle this difficult job. The large cutting jaw and the series 360 degrees endless rotary gear allow the cutter to be positioned with high precision and a rapid progress to be made.

Excavator operator Dirk Bartke is enthusiastic. Because of the exact handling properties and the strong performance he believes that the demolishing job covering some 6000 metric tons will be completed at the end of the second week. This will surely improve the Hanover-Letter parking situation. 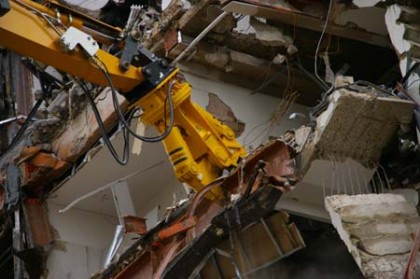