Indiana’s only nuclear facility hasn’t been notable for anything other than being an eyesore and a 30-year-old unfinished project. Now MCM Management Corp. is reclaiming the property with the help of Atlas Copco breakers and is turning the property into a valuable piece of riverside land. To do that, MCM is clearing land occupied by administrative buildings, outbuildings and thick concrete and rebar-covered silo and containment structures built literally nuclear blast proof.

MCM owns 233 hectares of this property, of which 760 metres are along the Ohio River. The nuclear power plant was known as Marble Hill and is located north of Louisville, Ken., and south of Madison, Ind. Construction started on the facility in 1977 and after 2 billion € was spent, the project was abandoned in 1984 as nuclear energy was opposed by those leery of nuclear waste or disasters.


Even though the nuclear facility wasn’t ever operational, the construction was far along. The facility was designed to contain a tremendous amount of pressure in the event there was ever structural failure or a nuclear accident.

Mark Ramun, vice president of MCM Management, said, “Nobody ever considered how it would be to take apart. Conventional tools don’t exist to handle it. The amount of engineering we’ve done so far just to get to where we are has been extensive.”
Atlas Copco HB 7000 breakers replaced breakers of a competitive brand that were used for about a month. Some of the lighter work could be done by the other breakers, but when it was time for the heavier concrete, the other breakers failed.

MCM worked with Columbus Equipment, an Atlas Copco dealership in Cincinnati, Ohio, managed by Jeff McVey. Fred Wahl handled the sale and said, “This job required breakers bigger than most of our customers regularly use.”

Ramun said, “Prior to receiving Atlas Copco hammers, none were effective at dealing with this concrete. These are very effective. Within two to three weeks we ordered a second one because of the performance of the first.”

Denise Brown is site manager for MCM. She said, “We worked three days on one section with the [competitive] breaker and when we put on the Atlas Copco HB 7000 the same amount of work was completed in three hours – these hammers are pretty amazing really.”

Dan Perry, MCM Equipment Manager, said, “Challenging isn’t even a word for it. It could not be destroyed.” Perry has worked in the equipment industry for 30 years and has seen a lot of demo projects, but said this one was unique. He noted that the company’s 11-tonnes wrecking ball was supplemented by the Atlas Copco HB 7000.

Kevin Loomis, Atlas Copco Product Manager of hydraulic attachments in North America, isn’t surprised by those results. Loomis said, “The HB 7000 is a powerhouse breaker with a proven reputation for hard hitting performance. It has a host of features that make it easier to operate, last longer and produce higher results. In fact, our entire HB line of breakers is designed to maximize production through variable output energy based on the job conditions, which makes them extremely efficient and extends service life of the components.”

Not the usual demo
Denise Brown has been in the construction and demolition business her whole life, hanging out with her father on job sites since she was a kid. She said about the Marble Hill construction, “They didn’t skimp on rerod. The silos are 1,5 metres thick concrete with 0,5 to 1m rerod everywhere.”

The hydraulic breaker’s job is to expose the rebar so the silos can be imploded and laid over on their sides and to remove the concrete structure separating the two silos. The silos would not tip if the structure behind is intact. The idea, like cutting down a tree, is to give the structure a wedge on one side and a stress point at which to break on the other. The breakers have to remove the building to allow for that break point.

Throughout the project the concrete surrounds the steel rebar like a thick skin. To determine what explosives are necessary to implode the silos, test shots are necessary. Test holes (7,5 centimetres in diameter and 0,4 metres deep) are drilled to load dynamite. Dynamite is loaded at 1,6 kilogrammes per drilled hole in a 0,91 metres x 1,06 metres pattern. That averages to 1,1 kilogrammes per yard. Normally concrete will crumble at 1½ pounds per yard. To drill the holes up to 21,5 metres up the sides of the silo, MCM uses an air drill mounted on a hydraulic fork lift.

In addition to the hundreds, if not thousands, of feet of steel rerod of varying diameters, within the silos are thick steel beams and below grade is a round, steel vessel, which was meant to contain the nuclear material. Also, stainless steel tanks inside the facility are nearly four stories deep, sunk into the ground. Nicol said, “Basically, this is an amazing amount of thick steel.”

Brown said the structures were all well built and it was obvious that quality workmanship was a focus for the engineers as well as contractors. She found that all beams had codes or inventory numbers stamped in the steel. She said, “Nothing on this job has been easy. When you think there is a solution to taking something apart or exposing something, there is another layer of structure beneath it.”

That’s why the crew is glad they decided to try Atlas Copco breakers when they did. Ramun said, “This is our first experience with an Atlas Copco breaker and we have a very large fleet of equipment. At times we’ve had more than 100 hydraulic mobile shears in our company’s inventory, and we’ve processed millions of tons of steel, but we’ve never seen concrete like this before. We understand the value of using the right tools for the job and how important it is to feel comfortable with the relationship we have with the tool supplier; especially on jobs like Marble Hill. If these hammers continue to perform like they have, I think it’s safe to say that we’ll be sticking with Atlas Copco in the future.”

While the story of Marble Hill hasn’t been positive to date, that is about to turn around. Almost all of the materials on site will be recycled. Ramun said, “It was never activated and never contaminated so it’s a new structure, really. So our goal is to recycle 99 percent of the structures by weight.” He added that he’s proud of the progress MCM has made on the project so far and looks forward to what the future of the riverside property might bring. 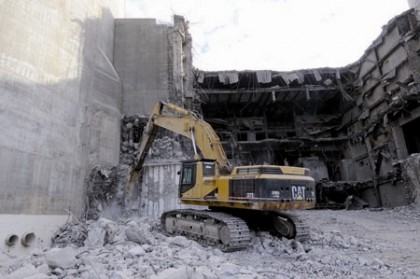