A total of eight Atlas Copco hydraulic attachments are used by FWA Fischer Weilheim Abbruch GmbH & Co KG (FWA) resident in Weilheim-Teck for demolishing the former company site of the Drescher printing works in Rutesheim. Now that the Rutesheim approach to the A8 freeway is completed, the site has become an attractive housing and commercial area that will be completely cleaned up and redeveloped this year.

Two administration buildings and seven solid workshops built in the fifties of the last century and representing an overall volume of 150,000 cubic meters have to be demolished in the first phase. FWA are using eight Atlas Copco attachments for this particular job. Four hydraulic breakers with a weight of up to seven metric tons are employed together with four hydraulic combi cutters each weighing three metric tons. In addition to this the new hydraulic combi cutter model CC 6000 U will be used which Atlas Copco will introduce on the occasion of the 2010 Bauma fair (from April 19 to 25 in Munich). 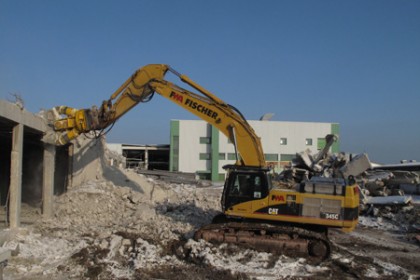