At present the grounds of the city hospital in Stuttgart, Germany, are turned into a major construction site. Right next to the Katharinenhospital the new gynaecological and paediatric clinic is under construction. This new building is currently the country’s biggest hospital construction site.

Before work could be started, first of all the former administration and storage building of the hospital had to be torn down. This demolition job had to comply with special restrictions curtailing the amount of dust, noise and vibrations produced during demolition work because normal hospital work has to be continued unhindered.

FWA Fischer Weilheim Abbruch (FWA), a company belonging to the Fischer Group from Weilheim/Teck, was entrusted with this large-scale demolition job by the provincial capital Stuttgart. Within the short construction period some 50,000 cubic meters of walled-in space above as well as below ground had to be demolished and properly disposed.

Work started with extensive gutting and sanitation activities. Apart from the usual sanitation of pollutant wastes such as synthetic mineral fibres and substances containing tar, a lot of sanitation work was needed to clear asbestos. Experts continuously monitored the work and in the end gave their OK for the demolition work.

In order to reduce the amount of dust produced during demolition FWA used their own water spray systems directly attached to the excavators to bind the dust near the sport where it is produced.

FWA put their trust in Caterpillar heavy-duty demolition excavators and Atlas Copco hydraulic breakers and silent demolition tools. Owing to the long-standing co-operation with the attachment manufacturer both parties benefit from continual innovations.

The last new entry of FWA’s equipment pool is the Atlas Copco CC 6000 U hydraulic CombiCutter launched on the occasion of the Bauma 2010. The company has been actively involved in the development of the cutter and has purchased the first series-produced cutter at the Bauma 2010 in Munich.

Only one day after the end of the exhibition the cutter was used for the demolishing work needed for the new hospital building in Stuttgart. „With its large jaw and the enormous power the new CC 6000 U is a big reinforcement for our machine pool,“ Joachim Schmid, technical manager of the Fischer Group, says. „And just like all other silent demolition tools it is quite silent and can therefore be used without problem in town centres.“

The use of the new CombiCutter allows the heavily reinforced concrete to be demolished much faster. „The proven design with two cylinders is applied on the CC 6000, too, which of course also preserves the excavators during demolition work “ the managing partner Georg Fischer continues.

Apart from the new CC 6000 U also a new CC 3300 B with box-type jaw is used on the construction site. Other Atlas Copco attachments are used for the demolition job: two CC 3300 hydraulic CombiCutters, one with universal arm and one with scrap cutting arm, and three heavy-duty hydraulic breakers with a 3 to 7 ton service weight. 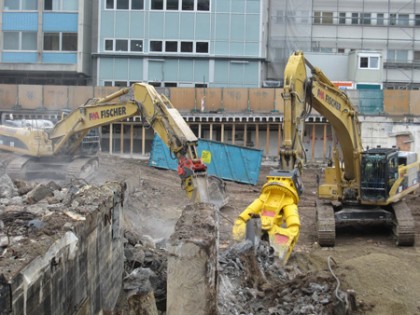