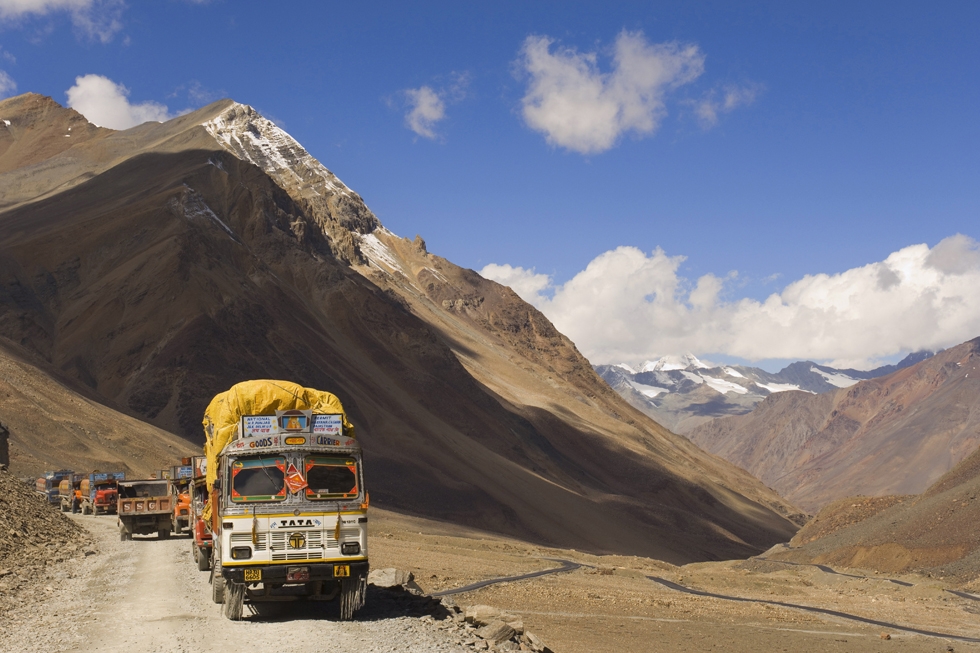 Tunnels
On the move in the Himalayas. New tunnels will make famous mountain road shorter, easier and safer.

Tunnelling to the future in India

Tunneling through the mountains of Jammu & Kashmir is no easy task and the project under way between Qazigund and Banihal, a few kilometers north east of Jammu, is no exception.

The work is being done by Navay-uga Engineering Company (NEC) using a fleet of six Boomer drill rigs from Atlas Copco.

“Normally for tunnels this long we would have at least four adits – one at each end and two in the middle,” he says, “but we have only two openings to work from, which are the two portals.

“This means that all materials and equipment will be traveling a distance of more than four kilometers to and from the only entrances to the headings, and this requires additional consideration for such things as lighting and ventilation.”

The geology is also problematic. Srihar explains that the rock conditions are poor and varies continuously through mudstone, siltstone and soft sandstone and these variations, in turn, demand different types of rock support.

The engineers are using the New Austrian Tunneling Method (NATM) of sequential excavation and temporary support. “You can’t use tunnel boring machines in the Himalayas,” Sridhar points out, “you can only use NATM, and for NATM you need Atlas Copco Boomers.”

From manual to automatic

Since the E-series Boomer rigs set the pace for the excavation cycles, NEC has opted for a COP Care service plan for the rigs’ COP 1838 rock drills, to ensure the highest rate of availability. Or as Sridhar puts it: “If the Boomer is idle, everything is idle.”

Navayuga chooses to handle all other maintenance itself, but to provide 24/7 support for the rock drills, two Atlas Copco service engineers are stationed on site – Abhoy Biswas at the South Portal and Raju Sharma at North portal, each with mobile service containers.

Navayuga was formed in 2006 and now has more than 1 000 engineers working on projects in India and overseas and says it prefers to work with one equipment supplier per assignment.

Sridhar explains: “When it comes time to procure new equipment, we don’t want to waste time debating which manufacturer to buy from. We want only a 30-minute conversation of a fair cost and an arrangement for when it will be delivered. That’s it.”

Several critical factors influences this decision. “First and foremost, the manufacturer has to be knowledgeable,” continues Sridhar. “We must be able to trust that the company has expert knowledge to advise us of our options. They must know the work we have to do as well as we do – not just sell equipment. We need to feel that we trust the company for the value of its equipment and that includes service and support which are excellent with Atlas Copco.”

As an example, Sridhar cites the purchase of a two-boom Boomer equipped with the Rig Control System (RCS). Its speed, precision and output more than offset the additional cost over a direct control system. The Boomer E2 C and XE3 C rigs were good value.

Sridhar concludes: “We are very happy with Atlas Copco for the technical competence and value of their drill rigs, and especially for their after sales support. We consider them to be family.”

The computerized controls make the six Boomer rigs easy to use. In the Qazigund–Banihal tunnels they employ lasers for positioning and set-up. Two alignment plates on the boom are aligned

with the laser on the face. The rig “reads” the coordinates and determines where it is in the tunnel relative to the face.

The operator loads the drill plan previously prepared in the office into the rig’s memory from a USB device and matches projected feed graphics on the display screen. Precise execution of the drill plan is ensured by the rig’s rigid BUT 45 booms, which eliminate deflection and minimize overbreak and underbreak.

Project Manager P. Sathyarnarayan says he is happy with the rig’s performance and progress. “We have 99 percent availability from the Boomers and they are running very well – everything is very good,” he says.

Development of the top heading is maintained 100 m ahead of the bench. The rigs drill one round with a 45 mm button bit in 1.5–2 hours, advancing both heading and bench 6 m per round in Class 3 rock or 4 m in Class 4 or 5 rock.

Holes are charged with emulsion cartridges and mucking is hauled away in 35-tonne trucks. Two excavation cycles are completed in two shifts per day. Rock support is provided by Swellex PM24 rock bolts with a pattern varying from 2 to 3 and 4 m, spaced 1.5 or 2.5 m center-to-center, depending on rock class.

Fiber-reinforced shotcrete is applied to 150 mm. In Class 4 and 5 rock, in which the crews encounter weathered sandstone and clay with quartz, a 25 mm primary coat is applied first. Lattice girders supply additional support as needed.

According to Sathyarnarayan, no convergence has been noted and the project is on schedule. At the time of M&C’s visit, more than 490 m had been completed in the left tube and 520 m in the right tube. Both tunnels are expected to be completed by the end of 2016.