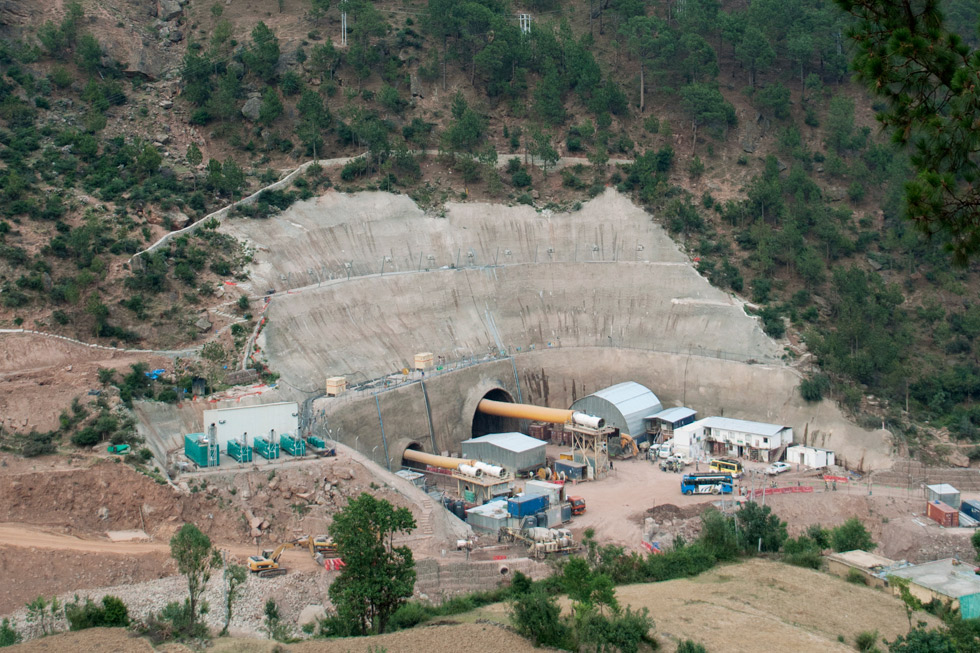 Tunnels
Construction of the longest road tunnel in India is advancing as planned with newly trained operators and equipment.

Construction of the longest road tunnel in India is advancing as planned with newly trained operators and equipment.

Traveling on National Highway 1A in northern India is an ordeal at the best of times. This single lane, narrow and winding road crosses some of the steepest, most treacherous terrain in the world.

The route becomes especially difficult to navigate between the cities of Srinagar and Jammu – a journey that can take up to 12 hours due to slow moving traffic and multiple traffic jams.

Now a solution is not far off thanks to a government initiative to upgrade this stretch of the NH 1A and turn it into a fast, safe, all-year-round highway.

The upgrade includes expanding the road to four lanes and the installation of several tunnels which together will reduce the total traveling time between the two cities to five hours. Equally important, the project will also make this relatively isolated region much more accessible to the rest India.

Longest tunnel in the country

One of the tunnels now being constructed is between the towns of Chenani and Nashri which at 9 km long will be the longest road tunnel in the country.

The project concession is held by Chanini-Nashri Tunnelway Ltd (CNTL), a subsidiary of IL&FS Transportation Networks Ltd. IL&FS’s Managing Director G. Vishwanathan and J.S. Rathore, Project Director of CNTL, explain that the new road alignment and twin-tube tunnel will cut 30 km off the distance between the towns and two hours off the journey. Together with the parallel escape tunnel and cross passages this amounts to a total of 19 km of tunneling.

Rathore points out: “Tunneling in the Himalayas is difficult and the Chenani-Nashri tunnel is no exception. The mix of geological formations here lead to a lot of distressing and cracking of the rock mass – it’s full of surprises. Nature does not follow the text books!”

Its objective is to transform India’s road systems and thereby drive economic growth. Coupled with this, ITNL exercises a broad program of social responsibility (Parivartan) through which it provides education facilities and support for communities along the highways it builds.

Vassilis “Bill” Poulopoulos, North Portal Project Manager, says: “Progress all hinges on one thing – the pace of the face drilling rigs. If the rigs stop, everything stops. Our crews have the excavation cycle down to 10 to 12 hours and we are improving steadily. We are looking for three blasting rounds per day with two 12-hour shifts and I’m certain we will achieve it.”

The tunnel enters and exits the mountain at an elevation of 1 200 m. When complete it will be 14 m wide and 10 m high. A smaller, 6 x 6 m escape tunnel is also being built alongside the main tunnel where Leighton is using Atlas Copco Häggloader 10HR-B loaders for mucking out into 35-tonne trucks. Cross passages will connect the main tunnel to the escape tunnel every 300 m for pedestrians and every 1 200 m for emergency vehicles.

The rock in this region consists mostly of sandy shale, mudstone, siltstone and soft sandstone, and drilling precision is of the utmost importance to avoid the extra costs associated with underbreak or overbreak.

Kon-stantinos Bastis, South Portal Project Manager, points out that this is where the automated features of the Atlas Copco rigs are proving their worth. A typical example, he says, is the Measure-While-Drilling (MWD) function on the Boomer XE3 C.

Poulopoulos adds: “This rig has been used at the South Portal to verify what we expected to find in the rock mass. The escape tunnel runs ahead of the main tunnel so the rig is used for probe drilling, checking to see that the rock ahead is what we anticipate.”

To meet the requirements, Leighton has developed a skilled drilling crew with the aid of Atlas Copco’s Master Driller training program. Three months prior to the project, and before ever seeing a production drill rig, 30 trainee operators completed all three levels of the course – bronze silver and gold – using an Atlas Copco Boomer drill rig simulator.

It takes at least 15 days to complete the course so the simulator remained on the site for three months to ensure that all drillers were sufficiently trained.

Bastis explains how lasers are used to position the rigs at the face. Two alignment plates are mounted on a rig’s boom. When the red laser beam passes through the plates, the boom is parallel to the laser at a known offset.

A single two-boom Boomer E2 C operator can set one boom in place, start drilling, then turn his attention to the second boom, continuing back and forth throughout the round. The operators can drill 100 holes over the 42 sq m escape tunnel face in just 1.5 hours.

The Boomer XE3 C with ABC Total drills the 76 sq m main heading with its drill pattern of 152 blastholes in 1 hr, 45 mins. Its precision has even allowed Poulopoulos to optimize the drill plan down to 130 holes. “I have an advanced piece of equipment,” he says, “and I am going to exploit it to its full potential.”

At the South Portal, Konstantinos Bastis explains that rock support is used to assist natural rock convergence which must be less than two millimeters per month.

Fiber-reinforced shotcrete is applied in two overlapping stages to a thickness of at least 15 cm. The first 5 cm is applied immediately after bolting. Setup time is fast enough to provide almost immediate support. Poulopoulos said that with proper scaling and bolting, the 5 cm fiber-reinforced shotcrete enables them to progress at a good pace safely, saving them the extra step of bolting up mesh.

The second layer of 10 cm shotcrete overlaps the initial 5 cm shotcreting during the next advance and provides the necessary support until the permanent lining is installed.

Minimum of convergence
In this way, convergence during excavation has been kept to a minimum without compromising on safety or progress. Lattice girders are used wherever movement is anticipated and will become an integrated part of the final tunnel lining.

Poulopoulos concludes: “We are in a remote location here with great hardship and logistics difficulties. But we will succeed because we have the best people in the right places. Atlas Copco is doing a good job of supporting us and we challenge each other to achieve excellence every day.”

Both tunnels are on schedule to meet their 2016 completion date.