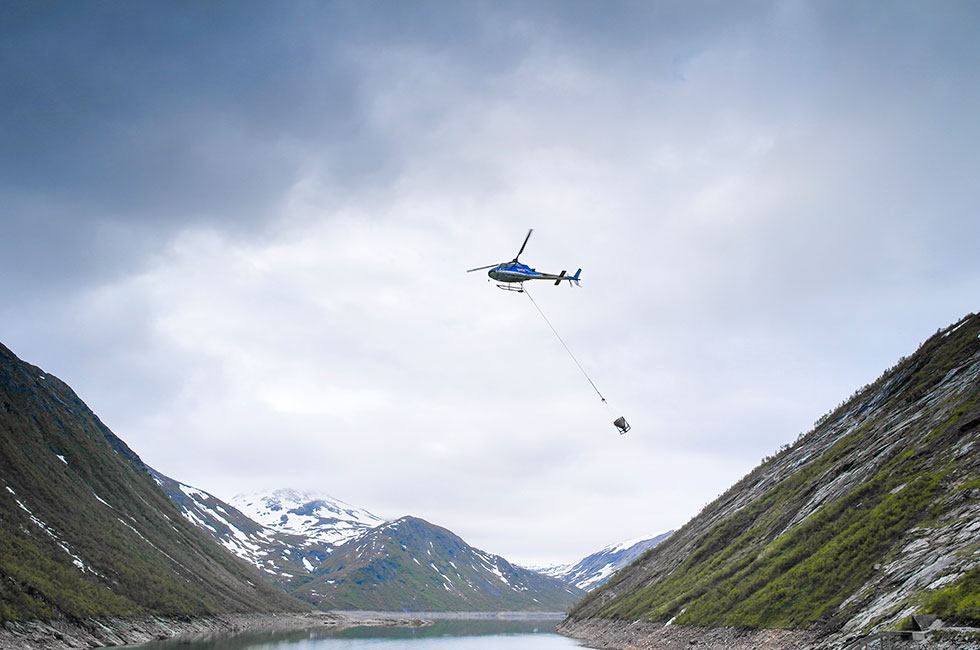 Excavation of a new hydropower plant in the mountains of Norway is going full steam ahead thanks to continuous loading technique from Atlas Copco and a loader called Häggloader.

At the best of times, loading and haulage operations in tunnels with small cross sections present logistical challenges. And the longer the tunnel becomes, the trickier it gets.

This was the scenario facing contractor Fauskebygg A/S when the company was assigned to provide the underground works for a new power station in a remote fjord region of Norway, some 700 km north of Trondheim.

In an effort to establish the fastest and most efficient production cycle in the headrace tunnel, Fauskebygg opted for a continuous loading and haulage system featuring Atlas Copco’s Häggloader 10HR-B continuous loader.

Today, however, most of the new plants being built are small, privately owned projects designed to create a surplus of energy for export. The Govddesåga project is a typical example. With an installed capacity of 25 MW, enough to power 2 900 homes, it consists of a small dam and powerhouse and 3.4 km of tunnels comprised of headrace, tailrace, access and haulage drives.

Here, in this mountain terrain some parts of the worksite are inaccessible by road so a helicopter is used to provide a continuous supply of concrete for developing the 30 m long diversion reservoir.

As the plant will not feature a penstock, the headrace tunnel, which is 2.4 km long and has a cross section of 20.5 m2, will take full advantage of a steep, 226 m drop to the powerhouse.

The construction work is divided into two 8-hour shifts with a crew of three for each shift – two drillers, using the Atlas Copco drill rigs Boomer M2 C and Boomer E2 C, and one loader operator for mucking out.

Fauskebygg says it would have been difficult to achieve high loading efficiency at this site with conventional LHD vehicles.

“In small tunnels such as these, logistics are tricky because a larger number of loading bays would need to be excavated to enable the efficient flow of haulage vehicles,” explains John Magne, Shift Manager. “The Häggloader saved us the effort of having to excavate 50 cubic meters of rock for every niche, and we would have needed about 10 niches.”

Minimizing the excavation
To solve the haulage logistics was critical, particularly in the headrace which is the project’s longest drive. The company wanted to avoid having haulage equipment standing idle, waiting to access the muck pile.

“In our planning, we could see that the longer the tunnel would get, the greater the logistics problems would become,” says Magne. “By introducing the Häggloader, we reduced the required number of niches to four and also managed to maintain a consistent two-hour cycle time for mucking out and transportation.”

To minimize the volume of  excavated rock was also important due to a limited capacity for depositing rock at a nearby stone quarry. “Beyond this,” Magne adds, “we were very pleased to get electrically powered loading into our operations as it has benefitted the working environment and also reduced our energy consumption.”

Good working environment
In contrast to a haulage setup using LHDs, the Häggloader takes up a stationary position at the muck pile. This enables the operator to focus on making sure that the blasted material moves onto the conveyor at a continuous pace.

“You don’t have to twist and turn your body to feel safe and in control while you are working,” says Lars Lunde, Fauskebygg’s Häggloader operator. “Also, the fact that we can use electrical power improves the air quality and keeps temperatures within tolerable limits.”

The Häggloader’s cabin is FOPS II approved and has an ergonomically designed driver’s seat with joysticks mounted in the armrests. It is also equipped with air conditioning, a heater, protection bars, LCD technology for performance data, and two rear-mounted cameras for maximum visibility.

Lunde took part in a training course provided by Atlas Copco and says it took him about two weeks to achieve a good level of proficiency.

On previous tunneling projects, Fauske-bygg has used the Atlas Copco Scooptram ST1030 LHD with side-dumping bucket, but in these cases the tunnels had a cross section of at least 36 m2. This meant that side-dumping was a viable option. The job of removing loose rock after blasting, however, has become easier with the Häggloader system.

“That’s another reason why we chose the Häggloader 10HR-B model,” emphasizes Magne. “We get a two-in-one function. We can use it for loading but also for scaling and to clear the ditches.”

Dealing with boulders
In some sections, oversized boulders often occur in the muck pile as a result of blasting in layers of slate. Boulders measuring 1 m x 1.5 m can be too large for the Häggloader conveyor so these are shifted to one side using the loader’s backhoe digging bucket, which is also possible if the dual digging arms option is chosen. The boulders are then removed from the mucking point by an Atlas Copco Scooptram ST1030 LHD or left in place and blasted in the next round.

Thanks to a built-in sprinkler system on the Häggloader, water can be sprayed at the mucking point during loading to keep the level of dust low at the tunnel face. According to Ronny Bakk, a Boomer drill rig operator at the site, this also improves visibility making it easier and faster to accurately position the Boomer rig.

Maintenance and safety
At the onsite service depot, all of the equipment, including the Häggloader, is overhauled at regular intervals. Any maintenance tasks that cannot be solved by the contractor’s own engineers are handled by Atlas Copco service technicians.

“I’ve worked on overhauling tunneling rigs for many years, but I had never seen anything like the Häggloader before,” says Svein Rubbås, who has been Fauskebygg’s service manager for the past 15 years.

Rubbås says: “Preventive maintenance is what I look at first for all of the equipment. We follow the manuals with oil changes and lubrication of parts. I am getting used to the Häggloader and its compact design. Changing tires, hoses or couplings have been easy jobs that can be done onsite in the tunnel, which saves a lot of tramming.”

The teeth on the Häggloader’s excavator bucket are changed roughly once every two weeks, and as the machine is new, Rubbås said he does not expect to encounter any mechanical wear issues for several months.

With a plan to boost the national hydropower output by 12% from now until 2020, Norway’s focus on innovative and environmental construction techniques is expected to grow. In this respect, continuous loading with Häggloader is well placed to meet Norwegian standards for a good working environment and a minimum of impact on natural surroundings.