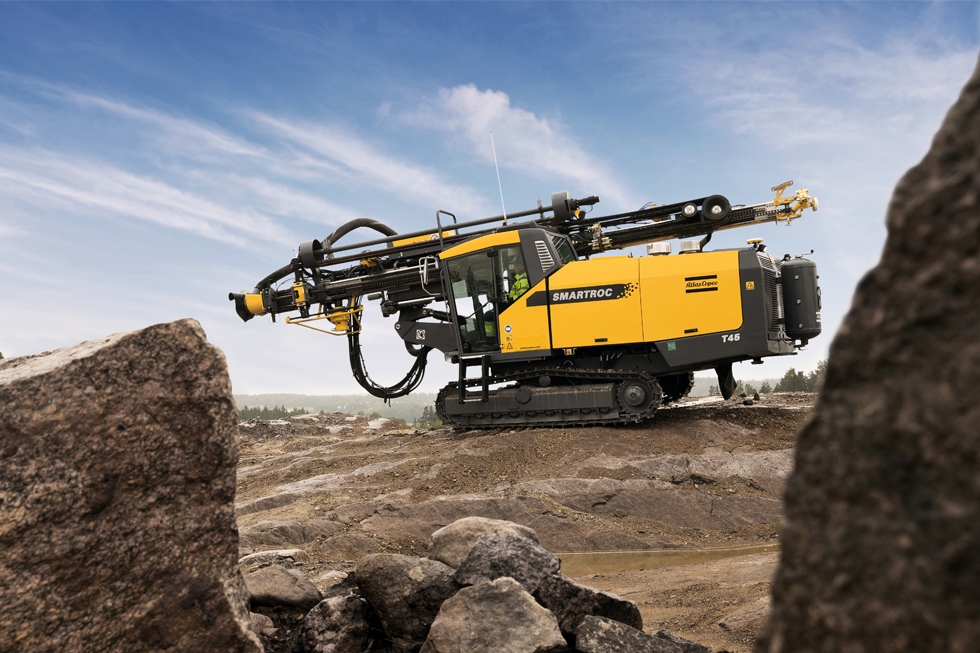 The launch of the FlexiROC T45 took surface drilling efficiency to new heights – but the new SmartROC T45 has proved beyond doubt that it has the edge.

The SmartROC T45 rig was recently launched in selected countries and has proved to be a milestone in the effort to increase efficiency in aggregate and limestone quarrying.

Working in the hole diameter range of 89–140 mm (3½”–5½”), the rig’s
performance has been closely monitored in various climates, ranging from very cold to very hot, and in different applications – all with outstanding results.

Drilling in a quarry near Frankfurt in Germany, the rig proved its capabilities beyond dispute by putting in an outstanding performance to overcome the demanding, fractured German basalt.

Drilling 102 mm holes on 20 m high benches, the rig consistently achieved more than 40 m/h, with a fuel consumption of less than 21 l/h.

In Australia it was the same story. The SmartROC T45 impressed loyal users of the FlexiROC T45 (previously known as ROC F9C) by demonstrating a fuel consumption of less than 20 l/h, proving that it lives up to its claim to increase profits from the very first day of drilling.

The big difference with the SmartROC T45 lies in its high level of automation. Many aspects of the operative process, such as aligning the feed and the actual drilling, are automatic, which not only gives continuous, satisfactory results but also exceptional precision.

The rig can be equipped with the hole navigation system (HNS), which makes accurate setup and collaring extremely easy. Furthermore, the drilling function is automatically adjusted to the precise position of the hole bottom, according to plan, and the whole process is driven and documented by the rig’s ROC Manager Program, providing detailed information for accurate decision making.

Says Mario Santillan, Product Manager for the SmartROC T45: “In the  long run, it is not the productivity and precision that will be paying off, but the consistency delivered. It is the fact that owners will be able to rely on satisfactory results, shift after shift, day after day, irrespective of which operator is at the controls.”

This winning combination of productivity, precision and consistency is the key to improvement throughout the whole quarrying process chain, enhancing fragmentation, loadability and the crushing throughput.

Santillan concludes: “If our customers believe that reducing the cost of drilling is a good idea, they are right, of course. But reducing the overall rock excavation cost is, well, smart!”