He sets a drilling program using the remote control. The machine then takes over and takes care of the rest. For operator Per-Anders Olausson, the SpeedROC 2F drill rig means a whole new – and better – way of working.

In the west coast of Sweden, a type of gneiss that is unique in the world is quarried. It was named after the farm next door: Bårarp, which has been Anglicized as Bararp. This is where Per-Anders “P-A” Olausson works as a drill rig operator at Swimpex Granite. After 26 years he has got to know the soul of this rock.

“It’s the only rock in the world to have this coloring and patterning. Not only that, but the pattern varies depending on how I choose to drill. In western Europe they prefer a wavy pattern with more red in it, while the big eastern market likes a striped pattern,” says P-A Olausson. 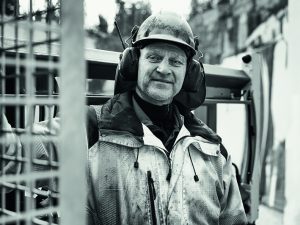 His job is to drill out blocks, often a good five cubic meters in size and weighing 17 metric tons, which will then become gravestones, cladding, steps or countertops.

“I have to take into consideration pattern, colors and any defects, cracks and other quality faults when I plan the positioning of the drilling holes. The drill bit has a diameter of 33 millimeters and there are just 10 centimeters between holes, so the rig can’t go off course.”

Swimpex Granite has had a SpeedROC 2F drill rig from Epiroc since November 2017.

“We had a demo rig for a week, but I liked it so much the management decided to buy it. We had an instructor here from Italy for a week, and the support since then has also been really good and helps me with any questions. I’ve probably run the rig for at least 600 hours since we got it, and I’ve been extremely happy with it so far.”

He compares it to the rig he used previously, reeling off point after point on his fingers.

“This one’s faster, more fit for purpose, has more settings, higher capacity, lower fuel consumption and is much more automated. I set where and how deep it is to drill, and then it takes care of itself. It’s an absolutely brilliant rig. I’d never have believed it could be this good.”

On a good day in good conditions, it takes P-A Olausson around two hours to drill out a block.

The old rig was based on the same principles, but nothing was automated.

“So it was a full-time job just keeping up with it. OK so I still have to change drill bits, but you have to do that on any rig you have. I’d never go back to the old way of working –that would be unimaginable.” 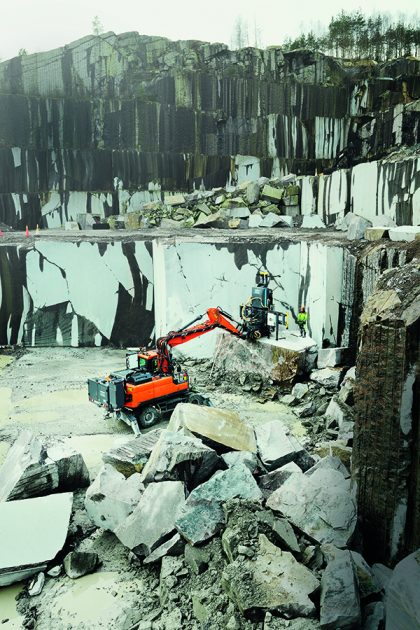