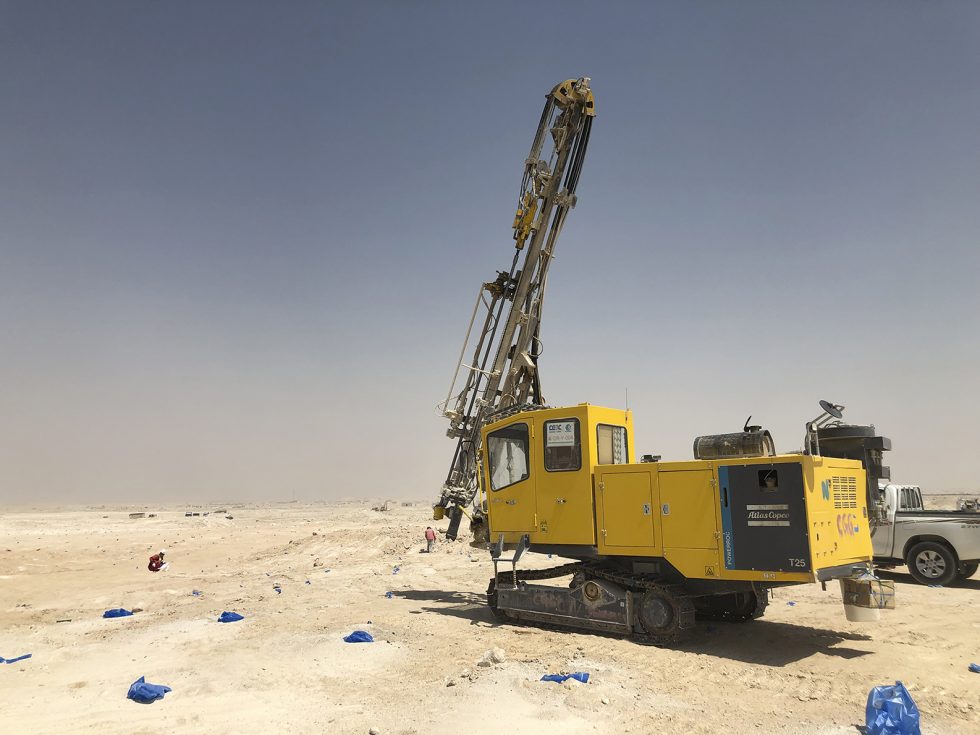 Very few things can bring chaos and mayhem to a country such as war. Kuwait, the small Middle East nation nestled in between Saudi Arabia, Iraq and the Gulf, have seen its fair share of destruction through the years. Since the mid 90’s however, the country have been rebuilt and development of new cities is now well underway.

Kuwait City is the nation’s capital and largest city. The car ride from here to the South Al-Mutlaa Housing Project takes about 45 minutes. When stepping out of the air conditioned vehicle, the 50°C heat is intrusive. It is so warm in fact, that government regulations prevents people from working outside between 11 am and 4 pm during the summer period. So work on sites like this is predominantly carried out during night and the early hours of morning.

Here, in one of the driest and least-hospitable deserts on Earth a new city is being constructed. From scratch. South Al-Mutlaa will eventually house some 400 000 residents whom will enjoy the services of 116 schools, 156 mosques, 48 mini-markets, 12 public health centers and much more.

To build a new city of this size from the ground up, you need fearless men and women. You need strong partnerships. To build a brave new world you need brave contractors to do so. The Chinese company China Gezhouba Group Co. (CGGC) is just that – brave. This construction company has quite the track-record with successful development projects all around the globe. One of their tasks in the South Al-Mutlaa Housing Project is to level the ground for infrastructure such as roads and pipelines but also for residential houses and other structures. 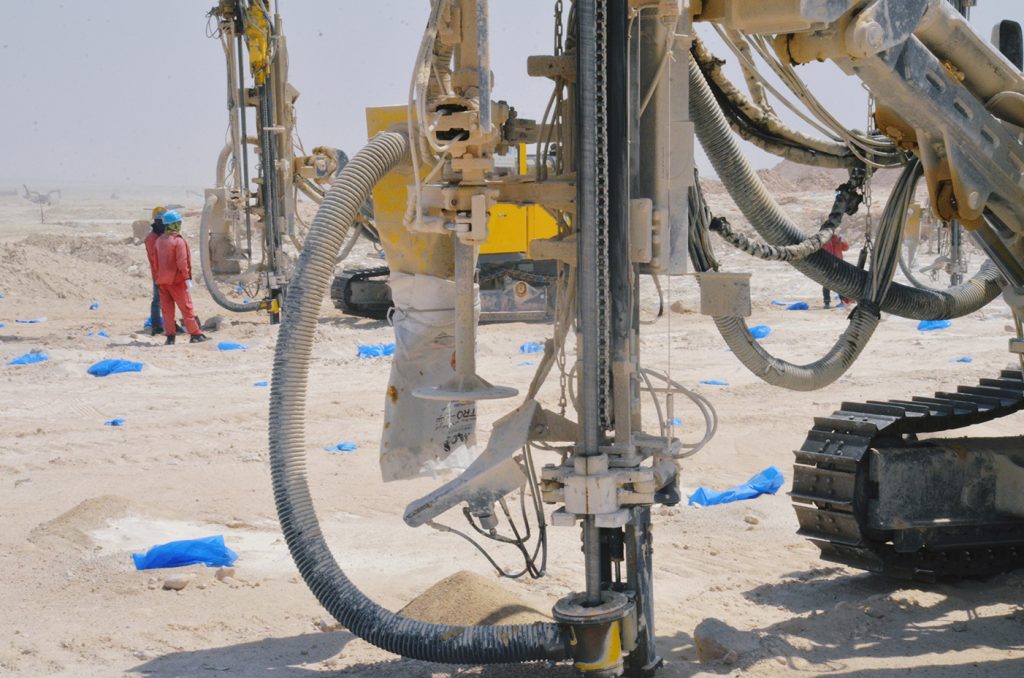 In this desert jobsite there is rock that needs to be removed in order to prepare the ground. The rock types are mainly soft to medium-hard and range from limestone and sandstone to gabbro. The conventional method for excavating rock in an application with this type of geology, is to use excavators. But after investigating the site and considering the demands for efficiency, CGGC did something that no one had ever done before in the history of Kuwait.

In this specific geographical location and in this application, the drill- and blast method of rock excavation has never been used. So it is crucial for CGGC to be able to trust their equipment for both performance, straightforward operation and easy maintenance. They opted to go with the PowerROC T25 DC from Epiroc and have purchased six drill rigs of this model to carry out the drilling operations in South Al-Mutlaa.

The PowerROC T25 DC drill rigs are working side-by-side completing designated drill patterns, the hole diameter is 76–89 mm and hole depths range from 2–12 m. This is largest blasting project in Kuwait with as much as six blasts being carried out every day. During summertime, blasting is carried out 2–3 times every day, all days except Fridays. Each drill rig has a four-man team that consist of two operators and two drilling assistants in two shifts, the latter carrying out tasks needed outside the cabin, such as drill bit change and collaring preparation. 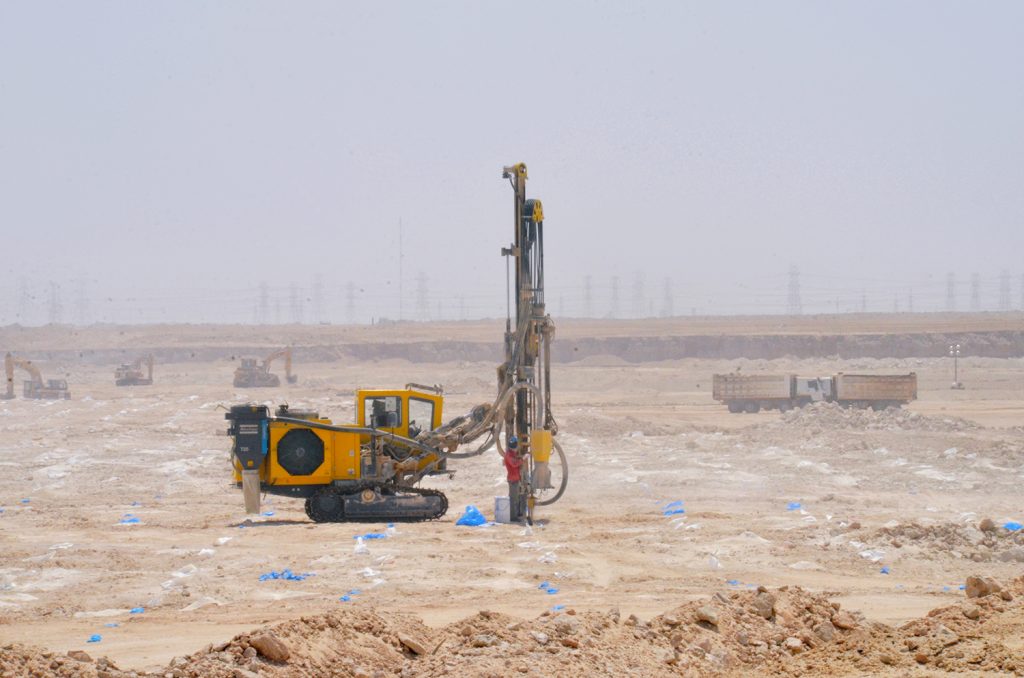 Cheng Yunfei is CGGC’s Deputy General Manager for the South Al-Mutlaa Housing Project. He gives his view on why the PowerROC T25 DC drill rigs were chosen for the project.

“It was not a difficult choice for us to go with Epiroc drill rigs for this project. Epiroc is a very well-known company around the world.”

To be part of constructing a new city in the middle of a scorching hot desert is a challenging endeavor on its own. To employ a rock excavation method that has never been used in the country before, doesn’t make it less challenging. The six PowerROC T25 DC drill rigs are first-on-market in Kuwait which means that Epiroc presence is not yet fully developed

“We are the first ones to use drill rigs here so it’s only natural that we are facing some challenges. But together with Epiroc we solve the issues as we go along.” says Yang Bo, the Deputy Manager of Drill and Blast division for CGGC. 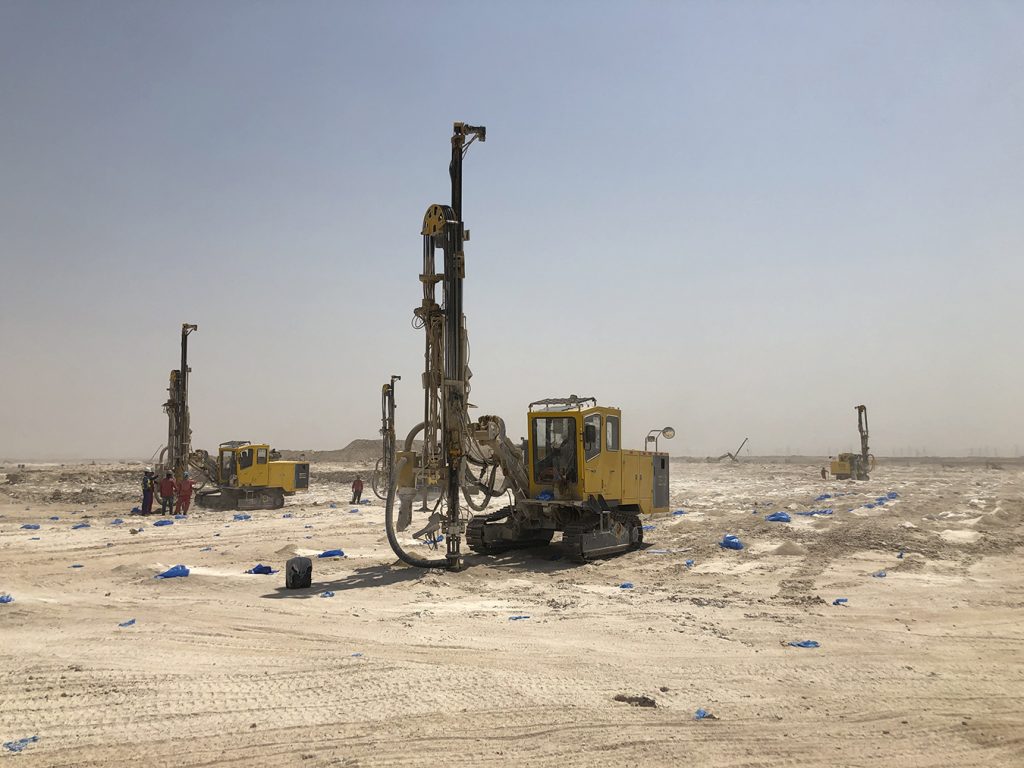 He is especially pleased with the fact the PowerROC T25 DC is outperforming competitor drill rigs used by other contractors in South Al-Mutlaa, when it comes to drill meters per day. He also gives the thumbs up to that it is easy for operators to get familiar with the equipment. Many of the operators hired for this project had never set foot inside a surface drill rig before. Since the operators are the ones to use the drill rigs on a day-to-day basis, it goes without saying – it’s very important that they feel comfortable with the equipment.

“The machines are very easy to learn. One week of training and our operators were up and running. Once we got assistance on the mechanical side, operations were even more efficient.” says Yang Bo.

He continues: “Another benefit we see is that regular maintenance is easy on these drill rigs. We have experienced minor delays in getting spare parts but every time we ask for service – Epiroc comes.”

Cheng Yunfei agrees with Yang Bo and adds: “We are confident working with Epiroc, it is an established supplier of drill rigs that many other companies in China has partnered with. Generally, we are satisfied with the aftermarket and service that Epiroc provide. Of course there are things to improve and that’s expected for a project like this.”

He concludes: “I trusted my colleagues in the Drill and Blast department when they recommended that we should purchase these six PowerROC T25 DC drill rigs from Epiroc and I don’t regret it. We have a long history of working with Epiroc and Atlas Copco before that, for projects all around the world. We are very happy with the equipment and the strong partnership.”

A strong partnership is crucial when embarking on a journey like this – building an entirely new city using first-on-market equipment. For two companies to develop such a partnership they need to share similar values and that is certainly the case with CGGC and Epiroc.

The text on a wall-sign outside of CGGC’s field office in the Kuwaiti desert provides perfect examples of such values. It reads: “Fairness. Honesty. Win-win.”