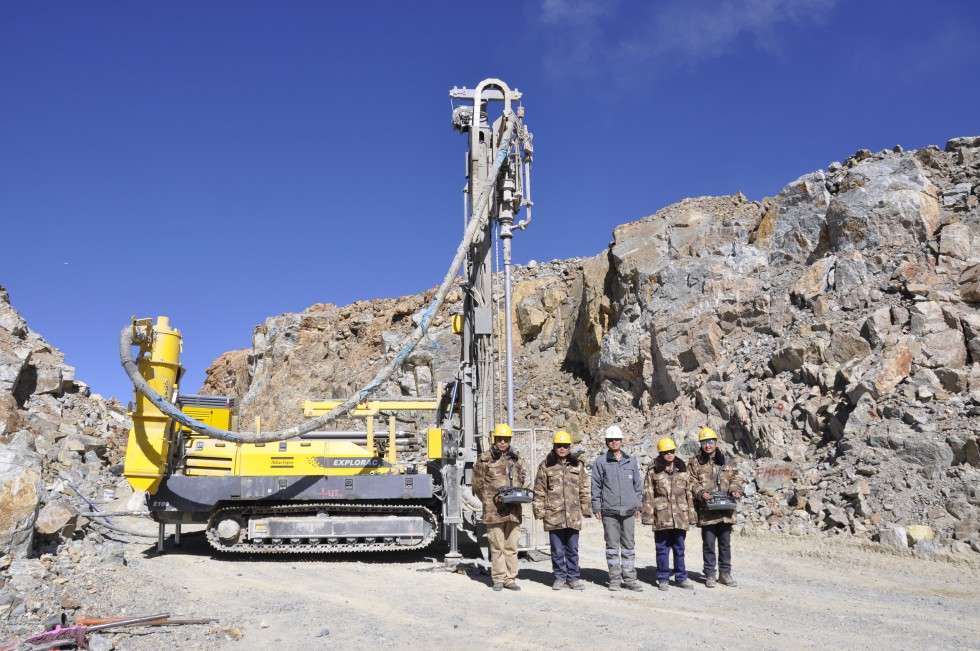 Huatailong is a directly-owned subsidiary of China National Gold Group Corp. It was founded in Tibet Autonomous Region on December 9, 2007, and in the very same year obtained development and construction rights for the Jiama (Gyama) Copper-Polymetallic Deposit Mining and Dressing Technological Transformation Project. The Gyama Mining Area is located 68 kilometers away from Downtown Lhasa within the territory of Gyama Village in Maizhokunggar County, Lhasa, at altitudes ranging from 4,000 to 5,407 meters. With a mining rights area of 144 square kilometers, it is one of the largest copper/gold mines in China. To enhance ore grade control and achieve more efficient exploitation of mineral resources, Huatailong purchased an Atlas Copco Explorac 100 reverse circulation drill in September 2015, officially opening the curtain on the first application in China of this world-leading reverse circulation drilling rig.

Huatailong official put its new Atlas Copco Explorac 100 reverse circulation drilling rig into operation on September 14, 2015. The rig is equipped with an Atlas Copco DrillAir XRYS1150 Highland Type Portable Air Compressor and works at platform altitudes of 4,800 to 5,200 meters, ambient temperatures of -5°C-35°C, an average humidity of 10%, and a rock hardness of F=10-12. Due to the harsh natural environment, the drill works only one 6-hour shift per day. Holes drilled are 140mm in diameter and 60m in depth; the drilling angle is 90° and the deviation is controlled to within 0.1%. Its overall drilling efficiency is about 25m/h and its penetration rate is 36m/h, about twice the penetration rate of similar air reverse circulation sampling drills produced in China. According to Mr. Wang Huan, an engineer and head of the drilling team of Huatailong’s Geological Resources Department, after introducing Atlas Copco’s Explorac 100 reverse circulation drilling rig, the hole arrangement dimensions for coring were reduced from 80m×80m to 25m×25m, perfectly meeting the company’s need to increase density in ore body grade control. And thanks to the Explorac 100’s ability to drill out rock powder directly and its high efficiency, it has helped the company greatly shorten the sampling period and improved exploration efficiency. Mr. Tang Zenglu, Product Manager of Surface and Exploration Drilling Department at Atlas Copco’s Mining and Rock Excavation Technique Customer Center for Greater China, said that “at present, the reverse circulation drilling technology is gaining popularity worldwide. Capable of continuously and quickly taking high-quality dry samples, this cost-effective technology is the top choice for sample taking in primary exploration, ore body mining, and grade control. Atlas Copco’s new Explorac 100 reverse circulation drilling rig was specially designed for exploration at depths of 100-200m. Combining a compact, durable design with enormous power, it can be used to take high-quality samples quickly.”

Born for the Plateau, Steady and Reliable

Mr. Wang is also pleased with the rig’s adaptability to high altitudes, saying: “Due to the special conditions of the plateau region, drills are expected to be extremely tolerant of high altitudes and low temperatures, and some drills have to be remodeled. The Explorac 100 reverse circulation drilling rig, on the other hand, totally stands up to the environmental conditions, offering excellent performance in terms of both cold starting the engine and drilling efficiency. And it’s worth mentioning that the drill’s fully enclosed engine design considerably lowers the noise level in the operation area. ” To ensure the performance of this drill at work and minimize the impact of drilling tool replacements on the production schedule, Huatailong has also provided the drill with a 102mm Atlas Copco dual-wall reverse circulation drill pipe, an RC50 reverse circulation hammer, and 140mm drill bits. Up until November 10, 2015, the drill pipe and the reverse circulation hammer had been in use for nearly 1,500m and were still in good condition for future use. Having used the first Explorac 100 reverse circulation drilling rig in China, Wang Huan has full confidence in this drill, saying: “This drill is technologically advanced, easy to operate, and highly automated. It will help us control ore dilution, lower ore dressing cost, boost resource utilization rates, and improve the mine’s overall profitability.”