The bay of Machico is a busy fishing harbour and tourist destination on the beautiful Portuguese island of Madeira in the mid-Atlantic. The bay area is now being upgraded with, among other things, new cultural and sports facilities, a new access road and a roadpedestrian bridge over a nearby stream.

The geological conditions at the site for the bridge foundations were adverse, to say the least. The ground consisted of a coluvio-aluvial deposit with a bed of gravel, and boulders of basalt up to one metre in diameter in a 15 metre-deep layer of sand on top of clay. The engineers were also faced with further challenges as the foundations were to be installed at the mouth of the stream, just a few metres from the pounding of the ocean waves.

Contractor TECNASOL FGE was awarded the task of building the foundations and opted to install 101 jet-grouted columns, one metre in diameter. The jet pile holes were reinforced with micropiles to support the loads transmitted by the two pillars and stanchions of the bridge. It was also necessary to drill preholes with rotary percussion drilling before jet grouting the columns. 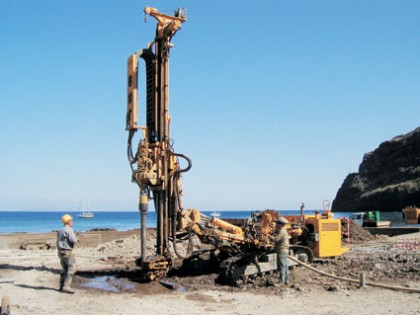