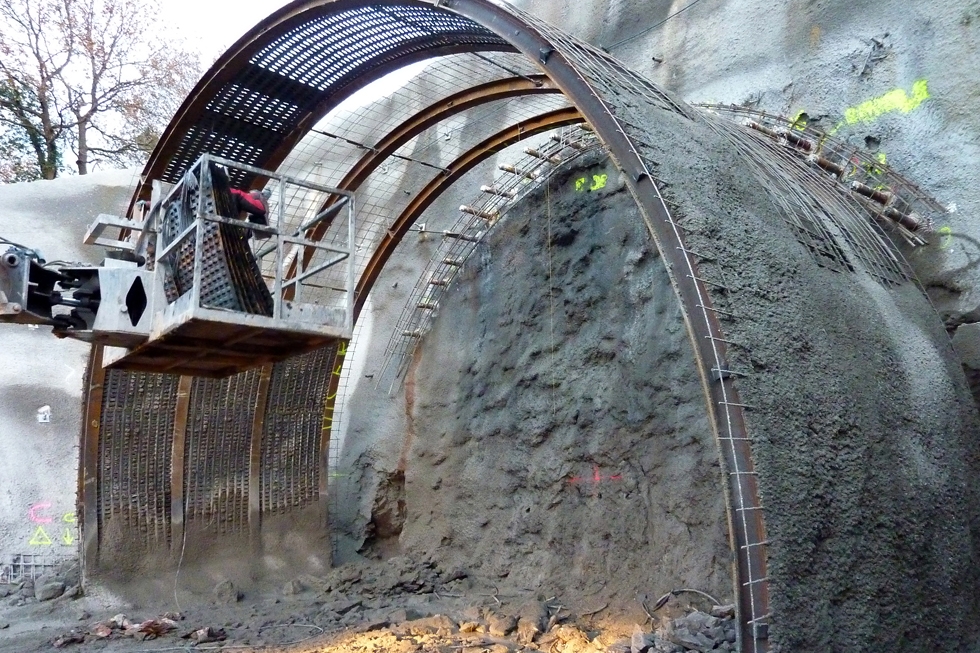 Under the Spanish umbrella

“We have installed hundreds of meters of pipe roofing around the country and this is my favorite method”.
Borja Del Palacio, Geotunnel

The new Torrebaso tunnel which is currently being constructed on the Bilbao to San Sebastian railway line, is  moving ahead according to plan.
This 150 m long, twin-track tunnel will allow trains to pass through Amorebieta,  in the Basque region, non-stop in both directions.

One of the biggest challenges for the engineers, however, is the poor ground conditions, but contractor Geotunnel did not have to look very far to find a solution. The company was already using an Atlas Copco Boomer L2 C drill rig to drill and blast the tunnel and was able to use the same equipment for pipe roofing work together with the Atlas Copco Symmetrix system.

This method involves steel pipes or casings installed in an umbrella pattern in the crown of the tunnel, providing support ahead of drilling and blasting.
The Symmetrix solution has been successfully used in similar ground conditions around the world and in Spain it is one of Geotunnel’s specialities.

Borja Del Palacio of Geotunnel, says: “We have installed hundreds of meters of pipe roofing around the country and I have to say Symmetrix is my favorite method.
“It is fast, reliable and economical and the quality of the bits and tubes we get from Atlas Copco is very good. Also, as we can use the same rig for pipe roofing as for drill and blast, it is not necessary to sub-contract this work to a specialized pipe roofing company.”

Andoni Bonaechea, Technical Office and Purchasing Manager, who decided to  adopt the method at this site, is especially pleased with the way the work has progressed. He says: “Pipe roofing using the Symmetrix system is by far the fastest and most economical way of stabilizing unfavourable rock conditions in tunneling and we have proved it at Torrebaso.”

It is estimated that more than 5 200 m3 of rock and soil will be excavated here and that the necessary stabilization and reinforcement work will require the installation of 1 824 m of steel pipes and 35 000 kg of cement.
For pre-support before each advance, the Boomer has installed five umbrellas with an average of 30 pipes per umbrella, each 12 m long. A starter pipe fitted with the standard Symmetrix ring bit set is used followed by extension pipes – in this case, 89 mm pipes with a 7.1 mm wall thickness using the Symmetrix P89 system.

Fast installation
The pipes are installed at an angle of 4°  and spaced 30–50 cm apart. Once installed, they are grouted in place to form a strong umbrella or canopy around the upper part of the tunnel profile.
Net drilling time for a 12 m pipe averaged 10 minutes and the total time for installation was 30–40 minutes per pipe, depending on the condition of the rock and other operational factors. As a rule, each  installation was perfectly straight.
Alas Copco’s Area Manager Jorge Diaz says: “Geotunnel has long experience of Symmetrix-based pipe roofing and the company chooses to work with us because of the features and quality of the Symmetrix system and the service that we provide.”

Sole supplier
In addition to Spain, pipe roofing using  the Symmetrix system has been successfully carried out in many other countries including Portugal, France, Sweden, Kazakhstan, India and the Czech Republic.
Furthermore, Atlas Copco is currently the only supplier in the world to offer a complete package of equipment for this technology – Boomer drill rigs, Symmetrix Casing Advancement System together with pipes, Secoroc drill rods and Unigrout grouting equipment. (See facing page).

Footnote:
At the Torrebaso tunnel project, Geotunnel operates as a subcontractor within the consortium Corsan Corviam/Balzola. The client is Ute Euba-Iurreta and the project has been commissioned by E.T.S. (Euskal Trenbide Sarea), the housing, transport and public works authority of the Basque administration.

Dealing with difficult ground
The Symmetrix Casing Advancement System  is based on the rotary-percussion drilling method and consists of a pilot bit and a ring bit.

The pilot bit is attached to the ring bit with a bayonet locking mechanism. Together they drill the hole which is large enough to allow the casing to advance simultaneously as the hole is being drilled in loose and collapsing ground conditions. During drilling, the pipe itself does not rotate so there is no need for high torque on the drill rig.  A special feature of the system is that flushing is carried out through the annulus between the casing pipe and drill pipe, ensuring high efficiency with minimal damage to the adjacen­t formation.

When the hole is complete, the pilot bit is unlocked from the ring bit and withdrawn through the casing pipe together with the drill pipe. The casing pipe (and ring bit) can be permanently left in the ground or retrieved from the hole.

Symmetrix is designed for installing casings with a diameter of 76.2 to 1 220 mm (3–48 inches). It offers a highly efficient method with great productivity and is used worldwide for a variety of applications in, for example, tunneling, foundation drilling and well drilling.