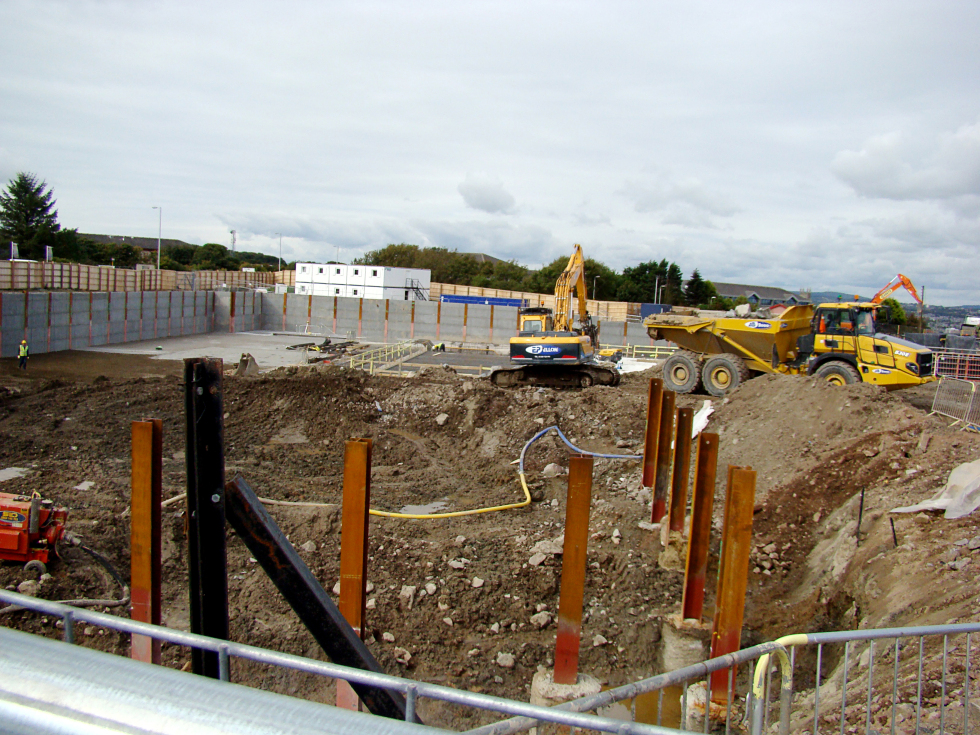 A special ground engineering project outside the city of Aberdeen involving the drilling of 220 boreholes in mixed rock formations required an equally special system to get the job done. The result was impressive. Each hole took just 20 minutes to complete.

Drilling contactor Drilcorp Ltd., of County Durham, UK, was recently awarded a contract to carry out a ground dewatering operation outside the city of Aberdeen on the northeast coast of Scotland. The task: to drill 220 holes, 168 mm in diamater, to a depth of 7.5 m.
Sounds simple enough, but proved to be easier said than done. The site consisted of 5–7 m of overburden comprised of varying layers of sand and gravel and interspersed with large granite cobbles and boulders before finally reaching granite bedrock.

The Drilcorp team got to work but this mixed strata combination quickly proved problematic and time consuming. In an attempt to find a solution for the ground engineering project, John Gowans, Director of Drilcorp, consulted with his contacts at Atlas Copco. “I wanted a tried and tested overburden system capable of tackling this chaotic strata,” he says, “and we wanted a system that was robust enough to take some serious punishment.” Another of Drilcorp’s requirements was reliability. “We had tried other systems at previous projects and they all had reliability issues,” he adds. “Now we just had to have a system that would run smoothly, with minimal downtime and maximum progress.” Atlas Copco proposed a trial with the latest N series R168 Symmetrix overburden casing system complete with a new COP 54 hammer. The package was put together and delivered to the site followed by a visit from James Mollon, Atlas Copco Area Sales Engineer, to commission the system and train the operators.

Mollon recalls: “We set up the new system and began drilling the first hole, running the compressor at 10 bar and with a low rotation speed. We soon encountered numerous large boulders, but these proved to be no match for the Symmetrix system. “The operators were a bit apprehensive about using the new equipment at first but they managed to achieve the required hole depth in just 20 minutes. One of the operators joked that it would take him longer to pull the casing than it did to drill the hole – and it did!”

The R 168 system, previously known as 131, had recently been given a design upgrade. This included an improved flushing capability as well as a dramatic improvement in quality, enabling it to sustain a great deal more stress and wear. “I have personally drilled in similar ground conditions using the previous 131 system and I can confirm that the new Symmetrix design is a real weapon,” Mollon says. “Even just drilling to a depth of 7.5 meters on this site I could see a vast improvement. The latching in and out of the ring bit has also been dramatically improved with less rotation required due to the five latching points. It seamlessly glides into latched and unlatched positions, and this was also noted by the Drilcorp operators.” Drilcorp got the job done, and Gowans was impressed. “We were very pleased with the new R 168 Symmetrix system from Atlas Copco. As Jimmy proposed, it turned out to be the perfect solution to this problematic project and the onsite training was second to none.” While at the site, Drilcorp also decided to purchase a second Symmetrix system and COP 54 hammer. Mollon concludes: “Apart from securing orders, this successful trial has helped to build a strong and successful relationship with this customer. In addition, three other drilling contractors in the UK have now expressed an interest in the new Symmetrix system.”