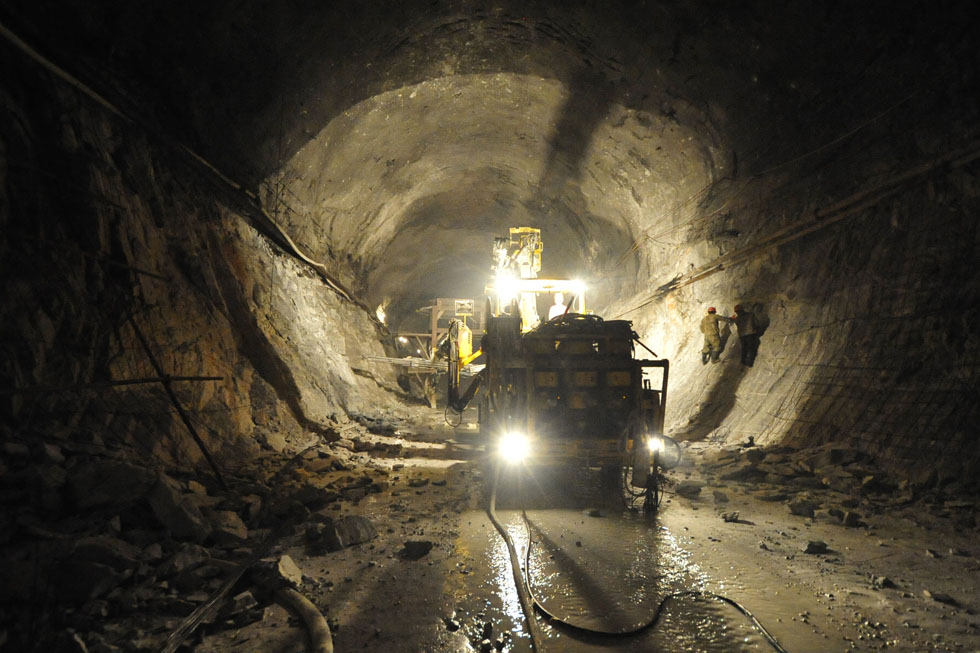 All eyes on Jinping

To bridge the gap between growth and energy supply, China turns to hydropower in a big way. The Yalong River now provides the scene as Jinping I and II near completion.

When the Three Gorges Dam on the Yangtze River opened in 2006, it was a testament to China’s successful efforts to harness the energy of its big rivers on a gigantic scale.

Now all eyes are fixed on the nation’s next mega-project in renewable hydropower, the Jinping Hydropower Station, set on the Yalong River bend in Sichuan Province.

The location has kept several of China’s hydroelectric engineering institutions busy for more than 50 years, studying the river’s potential for power generation and how to effectively tap it.

In November 2005, construction began on the Jinping project which incorporates two power stations, Jinping I and Jinping II. With a total installed capacity of  3 600 and 4 800 megawatts respectively, the facilities will provide a main supply of electricity from Sichuan Province to the east China region.

With the country’s industry, urbanization and population all growing continuously, hydroelectricity is essential to the nation’s expansion. As the largest producer of hydroelectricity in the world, China currently generates 17 percent of its domestic electricity from hydropower – and it is a figure that is set to increase.

When Jinping I is fully completed, its arch wall dam will be the tallest in the world standing at 305 m. This corresponds with the massive drop in elevation between the upstream and downstream points where the Yalong River turns back on its course and comes within just 16 km of itself.

At the west side of the Yalong River Bend, a 37 m tall, 162 m long sluice dam will divert water via four 12 m diameter, 16.6 km long headrace tunnels to the Jinping II power station. Of the four tunnels, two are being excavated with tunnel boring machines (TBM), and two by drill-and-blast. The work is being carried out by China’s No.18 Bureau of China Railway Tunnel Engineering Co. Ltd.

Tunneling is performed in two stages, starting with the upper 7.5 meters which are excavated with the Boomer 353 E. After the entire topheading is removed, the lower level is then excavated using the ROC D7 surface rigs.

Working two 12 hour shifts, the tunnels are advanced at the rate of 9–12 m per day. “Everything is working as it is supposed to. I have no complaints,” says Project Manager Quan Li and emphasizes the excellent performance of the equipment.

Li has been an Atlas Copco customer since 1984 when he was working in the Hong Kong area. With the best tunneling equipment on the market, he says, Atlas Copco enables him to go “full speed ahead”.And he adds: “The Boomer 353 E is made for this type of work. The rigs are simple to operate and the best size for these tunnels.”

Safety gets priority
Li concedes that finding skilled people to join the workforce is not easy here. Many come from the countryside where jobs are scarce, looking for new opportunities. It can take up to six months before they are proficient at operating the drill rigs.

The safety features of the drill rigs are another reason why Li says he likes Atlas Copco equipment. He has four men in each drilling crew and says: “No one gets hurt here. That is important for us because we care about our people.”

Had the tunnels been drilled by the traditional jack-leg method, workers would not have had the benefit of distance from the rock face, and the extra length of the BUT 35 boom is further reassurance, Li points out.

To secure the roofs, five Boltec LD rigs are used to install rock bolts every 1.2 m along the tunnel. Additional security for roofs and walls is provided by shotcrete over wire mesh. Once the excavation is complete the tunnels are lined.

With its sluice dam, spillway structures, power tunnels, a powerhouse complex and the four headrace tunnels, the Jinping II station is an even more complex undertaking than Jinping I.

When completed, the tunnels will rank among the world’s largest.

The total construction period is estimated at eight years with two tunnels due to come on stream in 2012 and the remaining two to start up in 2015.