With a height of 275 meters, the Yusufeli Dam is a construction project of epic proportions. Its remoteness and size place great demands on contractor Limak Holding. Epiroc rigs are helping the company to meet these efficiently.

LIMAK HOLDING IS INNOVATING FOR SUCCESS IN CHALLENGING CONDITIONS.

From a distance, driving through the valley, it looks slightly surreal. Small dots float in mid-air, slowly moving away from the mountainside. On closer inspection it’s no less intriguing. The bigger dots are drill rigs, while the smaller ones are platforms and other pieces of equipment. All the objects are being carried downwards by a cableway connected to either side of the valley.

“We are working in tough geological conditions and this pushes us to find alternative methods for the continuity of our operations,” says Atilla Coskun, Machine Supply Chief of Limak Yusufeli Dam Construction.

The bottom of the valley would normally be filled by water from the Çoruh river, flowing from the mountains of the eastern Anatolia region – referred to as “the roof of Turkey” – to the Black Sea. Since 2013, however, this has been a huge construction site. When operational, tentatively in 2020, the Yusufeli Dam will be able to store 2.2 billion cubic meters worth of water and the underground  power station will generate almost two billion kilowatt hours of energy.

Limak, Cengiz & Kolin JV was awarded the contract to build the dam. Limak Construction Company is responsible for both the dam and the power station construction, facing many challenges along the way. A big one is to make sure that the walls of the dam stay intact. 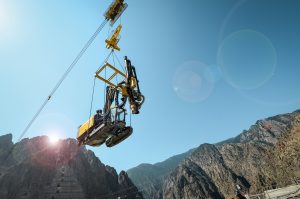 Operator Mustafa Doğan positions the Smart-ROC T40 drill rig at the bottom of the basin wall. Parts of the wall are covered with concrete boxes, placed in a check pattern. He drills a hole in the wall and repositions the rig to the side.

“The next step, using another machine, is to place a rock bolt in the hole,” says Doğan. “Then dolly devices are put round it, so that the pressure from the rock is distributed over a bigger area.”

He gestures at the check pattern on the wall. “That’s the boxes, covered in concrete.” 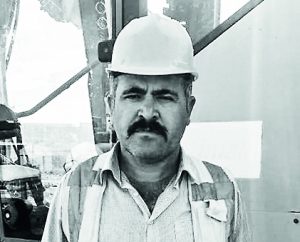 The anchor drilling is a way of dealing with the unstable rock conditions on site. Pieces of rock falling from the walls would pose a great danger during construction of the dam, so keeping everything in place is hugely important. Horizontal drilling is more difficult to perform than vertical drilling, but the flexibility of the SmartROC T40 makes it possible, which is a big bonus for Limak Holding. This is not least due to the folding boom, which enables the rig to reach further – thus covering a larger area – than other rigs.

“Basically, I can make an extra row of holes – so there’s more drilling and less tramming. Also, it’s easy to make holes of very high quality. I perform drilling operations of 35–40 meters per hour during a shift on a partly hard rock.” 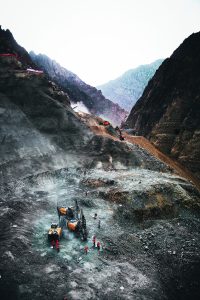 Rock bolts aside, there are many more figures that show Limak Holding’s gargantuan task. For instance, 86 kilometers worth of roads – including tunnels – will be built, and more than 3 000 people are working on the project. The natural valley is very deep, but in order to build the dam Limak Holding has to remove a lot of rock when shaping the dam body. The level will be lowered by 275 meters.

“At this point, the level we’re operating at is roughly 500 meters. We’re planning to lower the dam body from 715 to 440 meters above sea level.”

Coskun continues: “The rock quality – as in hard and fractured formations – and the climate have a negative impact on operations. Being aware of the challenges we would face here in Yusefeli, we were very selective when it came to choosing equipment. For instance, saving fuel in such a big and long-running project is vital.”

Limak has used Epiroc equipment many times in the past. Its first collaboration was on the Devoll Hydroelectric Power Plants in Albania, and Limak has partnered with Epiroc for a number of dam projects in Turkey. For the Yusufeli project, various brands were compared during the pre-purchasing period, after which Limak decided to proceed with the SmartROC T40 as the main drilling rig. A total of nine SmartROC T40 rigs are being used on site, as well as two older-generation SmartROC rigs, five Boomer 282 and three Boomer L2 D rigs. 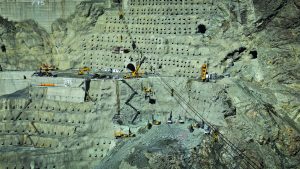 “Epiroc gave us a commitment that the Smart-ROC T40 would provide fuel savings of up to 40 percent. At first glance that sounds utopic, but the machine has lived up to the promises. The fault rates are also low, which is a big advantage – especially since this location is so remote. The SmartROC T40 that started working on site in June 2015 has reached almost 10 000 hours of working performance – and it still fully meets our expectations,” says Coskun.

Standing on the floor of the basin looking up, the magnitude of the project hits home. The rigs positioned on the platforms on the dam walls look toy-sized. Down here, three SmartROC T40 rigs are drilling vertical holes that will be filled with explosives. 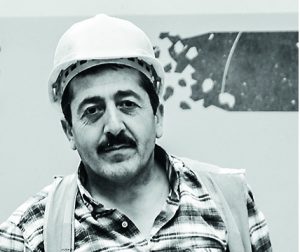 Exiting from one of the rigs, a SmartROC T40, Operator Mikail Celik has just finished a drilling cycle. “Efficiency is always important, especially in a project this big,” he says.

“You want to drill fast without compromising on quality. With this rig, I can use the rod handling system to program the drilling cycle and then the machine will drill to the exact desired length no matter what the type  of rock. I just supervise. It’s super easy and saves a lot of time. The hole quality is great, too.”

Celik elaborates: “I’ve been doing this job since 2002. Having worked with many different brands, I think that Epiroc machines – and the SmartROC T40 in particular – have certain qualities that set them apart. The design provides for maximum efficiency without compromising performance during operation. For instance, the combined effect of the hydraulic system and the control method means that the machine can move a lot quicker.”

Some of the rock excavated from the valley will be used to produce portions of the concrete needed on site. With the project getting closer to completion, vast quantities will be needed. Yusufeli is a double-curvature arch dam and the total volume of high-strength concrete to be poured during dam body construction is four million cubic meters. As for the tunnels passing through the mountains, eight Epiroc Boomer face drilling rigs are used during tunneling operations. 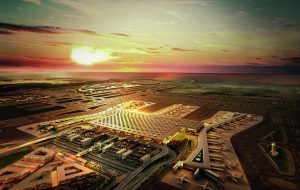 Limak Holding has collaborated with Epiroc on a number of Projects, starting with the Devoll Hydroelectric Power Plants in Albania. Since then, the companies have partnered in several dam projects as well as two major airport Projects in Turkey: Istanbul Sabiha Gökgen International Airport and Istanbul New Airport. Other ongoing include the Ankara-Sivas-high-speed Railway, the Northern Marmara highway and TANAP (the Trans-Anatolian natural gas pipeline).

To sum up, the Yusufeli Dam project is a challenging but, above all else, rewarding one for Limak Holding. “The Yusufeli Dam will be the sixth highest arch dam in the World and of great importance to Turkey. We’re very proud to be playing a part in this,” says Atilla Coskun.