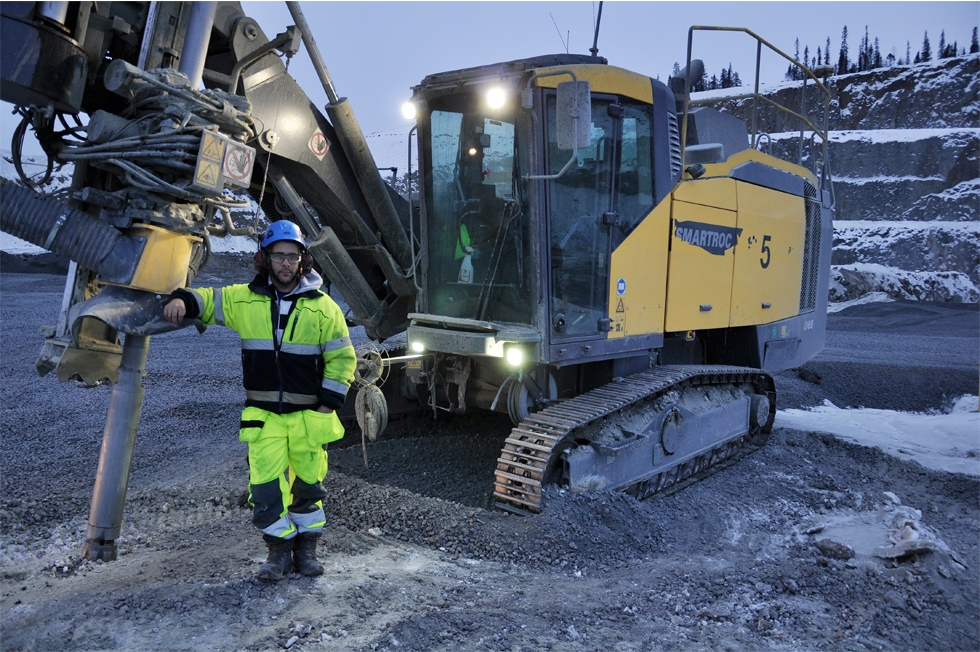 The latest down-the-hole hammer from Atlas Copco Secoroc – COP 66 – has proved its worth in hard rock conditions in Northern Sweden prior to its worldwide launch. The Svappavaara region, in the far north of Sweden, is mining company LKAB’s newest and fastest growing mining area. Located above the Arctic Circle, Svappavaara has three open pit mines ­– Mertainen, Leveäniemi and Gruvberget – with Gruvberget as the cornerstone of a plan to increase deliveries of iron ore pellets to 37 Mt/y by 2015.

Its mission is to produce two million tonnes of magnetite and hematite ore annually, giving it an approximate life span of eight years, although geologists say that it may be possible to continue mining here beyond 2018.

In its efforts to reach the goal, Gruvberget uses Atlas Copco equipment for all its drilling and blasting, including drill rigs for both tophammer and down-the-hole work with DTH hammers, with all rock drilling tools supplied by Atlas Copco Secoroc.

The mine’s iron ore is a tough challenge and the equipment is subjected to constant wear and tear. However, things have improved considerably over the past year with the arrival on site of a brand new type of DTH hammer – the COP 66. It is Secoroc’s newest addition to the COP family and is the successor to the well established and widely used COP 64 Gold.

COP 64 Gold has a solid reputation for speed, reliability and productivity, which has made it a firm favorite for more than a decade. It was therefore not without some scepticism that the drillers at Gruvberget put the newest addition to the test.

COP 66 was introduced as “a new innovation in platform design – faster, lighter and more economical”. It is designed for drilling 165–171 mm holes with a drill bit equipped with 16 or 19 mm buttons, without a center flushing hole, and operates with air pressures up to 30 bar.

The drillers at Gruvberget wanted to see for themselves if the hammer could live up to its description in their mine environment where the compressive strength of the rock reaches 300 MPa.

In order to reach the iron ore, a substantial amount of waste rock has to be removed – approximately 9 Mt annually. This is achieved by a fleet of three Atlas Copco SmartROC D65 drill rigs, three FlexiROC F9 rigs and one FlexiROC D9.

Leif Kemi, Production Manager and Senior Advisor at Gruvberget, explained that the ore contains high concentrations of iron, up to 65%, and that the mine has been relying more on DTH rather than tophammer drilling simply because in these conditions DTH tends to be more efficient.

Kemi explains: “After using the COP 64 Gold for many years we were not sure what to expect from the COP 66, but it has made a big difference. It’s lighter and shorter which makes it much easier for the guys to handle, but above all it is much faster. This has enabled us to increase our productivity most likely by 15 to 20 percent – and that’s a lot of money saved.”

Although Gruvberget sees distinct improvements in the new COP 66, Kemi emphasizes the value of drill steel management, and not least, bit grinding. “It is very important that the guys who sit in the rigs know what they are doing and don’t run the bits down to scrap level,” he says. “There are a lot of costs involved in these tools and if we can save money through better drill steel management it’s important that we do it.

“I think the message that good drill steel management is absolutely vital has to be repeated over and over.”

Besides excessive wear on the drill bits, Kemi also notes that hammers have often been dropped on the site and consequently damaged, but that this rarely happens now with the shorter, lighter COP 66.

Driller Jonas Selberg, agrees. He says: “At 69 kilos, the COP 66 is about 25 kilos lighter than the COP 64 standard, or COP 64 Gold, which makes it a lot easier to deal with. At first we were not very impressed. We didn’t think the hammer was all that powerful. There was also more noise and vibration in the cabin and the penetration rate was less than good. But after a while, when we got used to using it and controlling it in the right way, everything improved.

“Now we don’t have to change the hammer or the bit as often as we used to. We can drill about 5 000 meters before it’s necessary to change them. But of course there is always a risk when you are drilling in this hard material.”

Selberg adds that the COP 66 is “not as sensitive” with drill settings as other hammers. “You just set it up for waste rock drilling and off it goes. We experience a big improvement in penetration rate, too. Whenever I’m operating a different rig and my pal is using the COP 66, he is almost always half a rod ahead on each hole.”

At the time of M&C’s visit, the COP 66 had not yet been launched on the market. Selberg commented: “If it had been available I’m sure we would have changed all our hammers by now for the simple reason that it is easier to use and because our bosses want more drillmeters.”