The surgeons of drilling

‘Surgeon’ is a name perfectly suited the two SmartROC T40 drill rigs working inside the Italcave site in Statte (Italy), in the immediate vicinity of Taranto’s famous iron and steel industrial facility. Maximum precision and operative efficiency, joined with a notable optimisation of management costs. These strengths are one of the main keys to the profitability of this important quarry.

Quarrying is a particularly complex activity from a technical and managerial point of view, with profit margins being a key aspect. A carefully-designed development plan, optimised in terms of time lines, operation cycles, and the use of technological solutions that unite productivity with limited costs are all factors that help reach this goal. These considerations form the foundations of the extraction activities of Italcave Spa, headquartered in Statte (TA) and active in the mining, environmental and logistical fields. 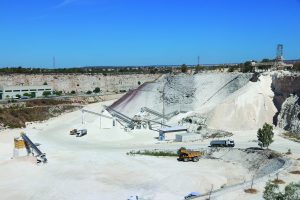 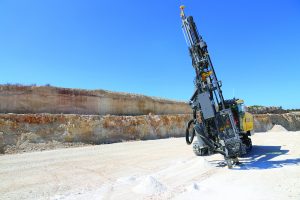 For the development of its extraction sites, the company has chosen two high-performing Atlas Copco SmartROC T40 rigs.

The company and work cycle Italcave was founded in 1973 by Saverio Caramia, today still firmly at the helm of the company, to manage and develop the current inert calcareous material quarry.
The result of the unification of three different extraction sites, today the quarry covers 1 million square meters. It’s a truly enormous area, constantly transforming and being developed, as Quarry Director Giovanna Leone tells us:


“At the end of the 1990s, we began diversifying our activities, which today include environmental services, with the creation and management of non-hazardous waste disposal within the areas of the quarry that are no longer in use; logistics, with the provision of handling services at the Molo Polisettoriale di Taranto (Multi-Industry Port of Taranto) and the management of a temporary deposit for petcoke and fossil carbon, as well as tourism”. 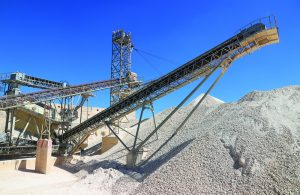 In terms of extraction activities in particular, they are conducted within a step-extracted vertical pit mine with benches no higher than 10 m and no deeper than about 40 m, tied to the static groundwater level. The extraction cycle is broken into five phases: Quarrying the walls of the pit takes place through the use of explosives after the removal of the topsoil, with an average daily blast on a grid of 24 holes measuring 3.5 x 3.5 m and 10 m in depth, involving an area of about 300 m2, to produce circa 2,700 m3 of calcareous ungraded product equivalent to about 5,000 tonnes.

The loading, transport and unloading of the material coming from the blast occurs via wheeled loaders and dumpers which use the inner service roads of the quarry to deliver it to the loading hopper of the main crushing plant. This is the production site for stabilised natural material (in 0-70 grain size), stored in mounds, and 70-300 mm pieces, partially stored and partially sent via conveyor belt to the secondary crushing and sorting plant. The second round of processing makes it possible to create other product grain sizes (0-4 mm mill sand, 5-12 mm gravel, 10-20 mm gravel, 16-31 mm gravel, 40-70 mm stones), which can be mixed in varying percentages according to their intended use.

One of the greatest strengths of the two SmartROCT40 rigs found in the quarry is the use of satellite positioning called HNS (Hole Navigation System). As Quarry Banksman Carmelo Stroscio highlighted,

“This solution makes it possible not only to position the machine with absolute precision, but also to have maximum control over all execution parameters of the blast holes. The rig is guided (in addition to the data coming from the satellite location system) in part based on the results of the geographic correction system found in the quarry, based on a topographical section polygon survey system that surrounds the quarrying site, which makes precision in the order of 2-2.5cm possible. The machine is also equipped with two satellite antennas which make it possible to optimise all drilling execution parameters, such as position, spacing within the grid, angle and depth, ensuring that the explosive blast loads reach maximum efficiency and thus get the best results. One further plus deriving from this system was a net improvement in monitoring the depth of the bottom of the quarry,  which in this case is also obtained thanks to the maximum precision of the drill depths guaranteed by the HNS”. 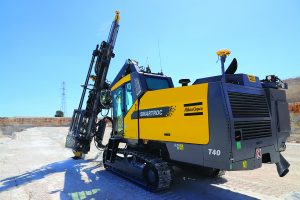 The HNS solution enables the operator to position the machine with absolute precision and at the same time have maximum control over all blast hole execution parameters.

To carry out the most delicate cycle of quarrying, the execution of blast holes in the grid as established by the quarrying plan, Italcave decided to entrust its operations to a proven solution with high returns and and precision: Atlas Copco SmartROC T40 drill rigs, two of which can be found at the quarry.

Taking us on a tour of the site where two machines have been in use for a few months now is Quarry Banksman Carmelo Stroscio, who summarised a few strong points for us:

“Thanks to its sophisticated control program, the SmartROC T40 tophammer drill rig is easy for the operator to use, offering both elevated production values and low maintenance costs, finding its main use in inert material quarries, where efficiency and environmental impact are of fundamental importance. Thanks to the precise supply of power in each drilling phase, the rig optimises fuel consumption without compromising productivity”.

In particular, the SmartROC T40 has a CAT C7.1 engine, Tier 4 Final/Stage IV and AdBlue, able to generate up to 168kW of power, found within a technological package designed to minimise energy losses, maintaining a high level of productivity. The operator can manually adjust the volume of the air discharge and the speed of the dust collector fan as needed, so that both systems operate under the program required for the desired performance. The engine and compressor speeds are automatically regulated according to the power demand; three variable displacement hydraulic pumps make it possible to limit the number of downtime engine revs, and even the speed of the radiator fan is automatically adjusted.

“Within the comfortable, clean design of the cabin – Stroscio continued – the operator has full control over  the drilling cycle thanks to the presence of two multifunction joysticks and an icon-based instrument panel. The rigs are equipped with an automatic rod adding system, making it possible to drill to a preset hole length without the operator having to intervene,thereby expanding  the lifespan of consumables”.

Also with the aim of optimising the machine’s performance and availability, the SmartROC T40 has a limited number of components, a solution that facilitates assistance and maintenance. Compared to similar rigs on the market, this model has 50% fewer hoses and 70% fewer couplings, so as to reduce the risk of leaks. Hydraulic valves and electric modules are distributed and positioned in their usage point, making components easier to access. Compared to models from the previous generation, the size of the hydraulic tank has been reduced by 65%, a solution that optimises consumption by only supplying the amount of oil necessary for the operation, while also providing more available space and easier service access. In addition, each SmartROC T40 is equipped with double hose drums on the feed, extending the life of the hydraulic hoses, limiting friction and eliminating the need for greasing. Lastly, the drilling rig can be equipped with the HNS (Hole Navigation System) option: this makes it possible to control the drill pattern via a GNSS (Global Navigation Satellite System) receiver. The HNS can set the hole position, angle and depth as defined in the pre-set drill plan. The result is a perceivable reduction in the drill and blast cost per cubic meter of material produced.

As mentioned, quarrying the walls of the mine involves blasting with standardised, micro-delayed explosives, adjusted in the quantity and network of holes to limit noise and vibrations.

“The blast type requires the execution of 24 holes that are 102 mm in diameter for a depth of 10 m – explained Stroscio – which allows us to remove over 2,500 m3 of materials. The work cycle is almost continuous, according to a schedule that allows for an operational tolerance of at least 3 blasts to ensure the proper feed of the crushing and sorting plants. In this context, the two SmartROC T40 rigs have allowed us to optimise the production process thanks to two main factors, one linked to the technological and construction properties intrinsic to the machine, and one linked to the HNS satellite positioning system.  HNS allows us to carry out the drilling of the blast network with maximum precision, following the quarrying plan and the daily service order, which we manage through the ROC Manager software”.

“In terms of production and yield – highlights Piero Pizzulli, Head of Vehicles and Maintenance – in the first months using the machines, those parameters proved to be perfectly in line with the volumes planned for every blast, data confirmed by the load measurements carried out on the dumpers used for the materials. Thanks to the excellent degree of drilling precision, even the amount of explosives consumed per cubic meter was optimised, just as the time lines and fuel consumption were thanks to the new engines and a more efficient compressor, hydraulic system and drilling equipment”.