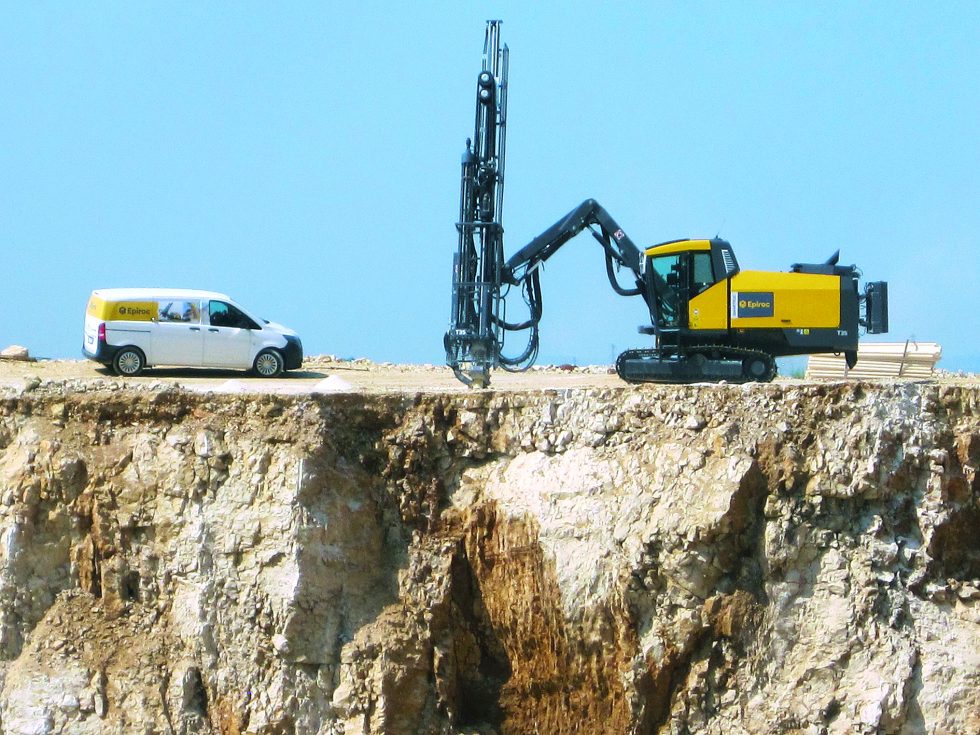 Machinery seen in action – be surprised by the wonders of change

At Volargne (VR) in the Vilca SpA quarry, recently acquired by Fassa Bortolo, we were able to see Epiroc’s SmartROC T35 drill rig at work: it is unequalled for drilling speed, hole quality, and fuel savings. Thanks to it being ‘Smart’, and thus benefits from the hyper-amortization available under the Italian Industry 4.0 plan.

Be surprised by the wonders of change. This may seem a phrase of New Age philosophy, yet it is often reality, reality that acquires even more value if this change overturns decades of ways of thinking and doing (modus operandi). As in the case of Vilca SpA, a company that last year became part of the Fassa Bortolo Group, it is a historic name in the construction world, a leader in Italy and internationally one of the most well-known companies. Vilca has changed drilling methods in the quarry at Volargne (VR), which opened almost 70 years ago, passing from down-the-hole hammer drilling to top-hammer rotary percussive drilling, thanks to the purchase of the brand-new SmartROC T35 from Epiroc, a new name effectively formed from Atlas Copco’s former Civil Engineering, Mining and Rock Excavation Division. 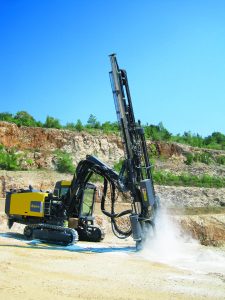 Top-hammer rotary percussion and a fleet of machines also including Atlas Copco have been used for decades in all Fassa Bortolo quarries, but not in the Volargne quarry: this covers 237,000 square meters (2.5 million sq. ft.), with roughly 6 million cubic meters (8 million cubic yards) extractable under current permit plus another 17 million cubic meters (22 million cubic yards).  As Ivan Groppa, Quarry Manager explains to us:  “Our annual production is about 130,000 m3 (170,000 yd3) of material, divided into three sizes: 40-80 mm (1.6″-3″) for feeding lime kilns, 18-40 mm (0.7″-1.6″) for pre-mix products and 0-18 mm (0-0.7″) for screening, or rather the stabilized aggregate we sell for the preparation of road foundations. In this period” – he continues – “we are working more to stock up on materials as the plant will be revamped in the fall, when it will be inactive for a couple of months that are needed to upgrade it to Fassa’s high production standards.”

The Epiroc SmartROC T35 drill rig, which can be seen here in full operation, arrived at the quarry last May and has already clocked up over 200 engine hours. However, there are three blasts a week, with ten holes each, following a standard grid with a 4 m (13 ft.) shoulder and 3 m (10 ft.) center distance between holes, each one 10 m (33 ft.) deep, with a total of 250 kg of explosives and approximately 1,500 m3 (2,000 yd3) of material yielded per blast.

As Mr. Groppa further underlines: “we have always worked using down-the-hole hammer drilling and so I admit there was initially some reluctance to pass over to top-hammer rotary percussion, especially due to the nature of the material being handled, which is 98% pure limestone, but with as many internal clay fissures as we feared, there might be some hole direction problems, something that didn’t happen, and even if evident deviations occur in the future, there’s still the possibility of substituting the drill string, which is currently 45 mm, and increasing it to 51 mm. In addition” – he points out – “thanks to the back hammer technology, percussion occurs not just in the drilling phase, but also on the upstroke, something that doesn’t happen using the down-the-hole hammer, to the extent that upon encountering non-homogeneous material, we have been forced, unfortunately, to leave the hammer and drill string in the ground, without being able to recover them.” 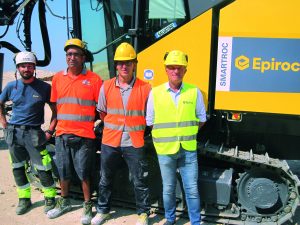 But the real advantage of the SmartROC T35 is provided by its drilling speed and fuel efficiency. As operator Salvatore Sanna explains: “drilling times have improved quite a lot, while we managed to make just about two holes an hour with the last rig, now we make three, and considering that I’m still getting to know the new tech, I don’t rule out making even four an hour. But more than anything else, it was the fuel data that left us speechless: seeing that we’re currently consuming around 10-11 liters of diesel an hour, we’ve saved 50% compared to the old rig that consumed 23 on average.”

With regard to maintenance, an Epiroc COP Care package was chosen, which extends machine and drill rig warranty to 4 years or 5000 hours, so that all routine and supplementary operations are included. Yet it should be noted that the SmartROC T35 has been specially designed to require the least possible maintenance.

As confirmed by Claudio Michielotto, Service Engineer: “Epiroc Mining and Rock Excavation Service: “the machine was designed to reduce hydraulic oil consumption as much as possible. In fact, only 160 liters of oil are needed for the hydraulic system compared to 200-260 liters for the previous machines, due to a reduction of 50% in the number of hoses and 70% in the number of couplings, so as to simplify the hydraulics and permit savings in terms of oil and fuel and, as a consequence, in terms of maintenance as the risk of leaks is significantly reduced.

It’s not by chance” – he continues – “that the maintenance interval for the drill rig, the core of the machine, which is a COP1840EX fitted with an extractor, has changed from the 400 hours of the previous machines to the actual 600 of percussion, which means an increase in the maintenance period of 50%, with a resulting drop in costs. Without taking into account” – as Mr. Michielotto further specifies – “that, thanks to the Certiq satellite system installed on board, we at head office constantly receive up-to-date information on the machine, and so not only can we see if the machine is working, for how many hours and, thanks to the GPS coordinates, in what position, but we can also see the appearance of an error message live, which is immediately read by our service, and so quickly take action over the phone and then go to the site with the part already ordered and received from Sweden within 24 hours. In the case of the Volargne quarry” – he explains – “the closest Epiroc service center is the one in Padua, and so a technician can reach the quarry in under an hour, whilst for scheduled maintenance the drill rig is taken to Cornaredo, in the Province of Milan, where we have a stripping/reassembly workshop and it is returned to the client in just one and a half workdays. 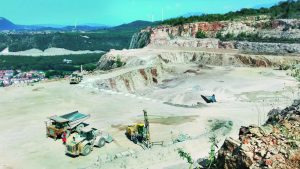 The SmartROC T35 not only records daily performance, consumption and work hours, transferring data to the office and Epiroc Service, but by being controlled via software and interconnected with the quarry’s computer systems, it can also receive remote data. In other words, as Mr. Groppa highlights: “we can send the blast plan, thus the instructions to proceed with making the holes, to the machine without operator interaction to be displayed on the simple and intuitive interface fitted to the machine, which thus effectively becomes smart, as inferred by its name, and thus benefits from the hyper-amortization available under the Italian Industry 4.0 Plan.”

If this possibility won a point in favor of the SmartROC T35, what really made the difference at the moment of purchase were undoubtedly the advantages, in terms of service and support, guaranteed by the Epiroc network.

As explained by Valentino Rizzieri, Epiroc Sales Area Manager: “to meet the request to test the drill rig directly in the quarry at Volargne before buying it, we organized a demo so that the Quarry Manager could appreciate the efficiency of the machine and of top-hammer rotary percussion used to extract fissured limestone like that found in this quarry.

The structural quality of the SmartROC T35” – stresses Mr. Rizzieri – “which represents the latest evolution in surface drilling rigs for quarries, is without doubt: weighing 15.3 metric tons, within size limits for transportation without special permits, feeder with 12 ft. travel, a 168 kW CAT C7.1 engine with DPF compliant with Tier 4 emission regulations, the SmartROC T35 facilitates hole-drilling with diameters ranging from 64 to 115 mm (2.5″ to 4.5″). In particular, for the 11-meter-deep holes usually made in the Volargne quarry, 3660-mm T45 rods with an 89-mm diameter tip are used. The on-board compressor pumps 7600 liters a minute, therefore 127 liters a second at 10 bar” – continues Mr. Rizzieri – “enabling the so-called drilling discharge phase, pumping air down inside the rods, which cools the tip and brings debris up to the surface, discharging the coarser part and sucking the dust into a collector with an 11-m2 (118 sq. ft.) suction surface. Furthermore” – he concludes – “as well as being equipped with an extractor, the machine is also fitted with a water mist system that allows the use of water mist in addition to air when drilling, to stabilize the hole.”

“In addition”, as Mr. Groppa underlines: “Epiroc has helped us in every phase, even directly organizing on-site training for the drill rig operators, so we could get firsthand experience of all the advantages of the change, in terms of both performance technique and technology applied to the machine.”

Fassa Bortolo is a historic name in the construction world, a leader in Italy and internationally one of the most well-known companies. The Fassa Group has widespread operations, with 17 plants and 9 branches, and has around 1400 coworkers. The company, in over 300 years of history, has known how to grow and develop, finding its own identity, composed of high quality, on-going research and respect for the environment. Fassa Bortolo represents a point of reference in the industry, especially when talking about appropriate management of the extraction activity. Legambiente, the most prominent Italian non-profit association, chose it as a positive example to emulate, because, through careful planning and the use of cutting-edge technologies, it works to respect the geomorphological, hydrogeological and landscape equilibriums, minimizing the environmental impact on the surroundings and allowing adequate recovery of the area when excavation terminates.

The Fassa Bortolo technicians who directly manage the limestone and chalk quarries from which the materials for the company’s products are extracted, constantly measure the dust and noise produced by quarrying operations to control environmental quality, both in the workplace and outside. The Fassa quarries are mined both opencast, downwards in horizontal levels, with each level being immediately remediated once the material has been extracted, and with underground stone crushing, which allows reducing transport vehicle usage.

The selection of first-class raw materials is the fundamental starting point from which a vast range of products is developed, offering an integrated system to construction companies as well as DIY enthusiasts. From mortars to plasters, solutions for the restoration and repair of concrete, to thermal insulation systems and up to plasterboards, enamels and decorative paints.