Atlas Copco’s rotary and DTH drill rig, DM30, has long been favored by small mines and quarries for blasthole drilling. Light weight and easy to handle, it has served them well. But now it’s time for the DM30 to move over… there’s a new kid on the block – the DM30 II.

For more than 30 years, the DM30 drill rig – the smallest rotary and DTH model in the range – has retained its popularity among the world’s smaller mines and quarries.

Specially designed for drilling blastholes in the 127–171 mm (5–6 ¾ in) range to a maximum depth of 45 m (147 ft), this multi-pass rig has been a favorite choice for its productivity, but even more so for its ease of use and flexibility.

Among its strongest fans, the DM30 will probably continue to remain a favorite for some time to come, but its popularity is fading fast as more and more drillers discover that there is a better version available – the DM30 II.

This version offers all the advantages of the basic DM30 – but comes with a range of upgrades and improvements that pave the way for new opportunities and choices.

Asien workhorse
The new “kid on the block” was born in 2011 and has been well received, notably in Asia where the DM30 is a well known workhorse in mines and quarries, but also in South Africa and Papua New Guinea.

Besides the larger hole diameter range of 152 mm–200 mm (6 –7 ½ in), which enables the rig to be used for a wider variety of blastholes, the new DM30II is a straightforward, well proven rig that has now been modernized and upgraded to include:

– a larger, thermal insulated cabin with no hydraulic hoses, providing a warmer, more comfortable and safer working environment for the operator

– an electric over hydraulic control system, similar to that used on other rigs in the DM-series

– an optional angle drilling package which allows the tower to be positioned up to a maximum of 30 degrees from the vertical in increments of 5 degrees, allowing the rig to be used for more applications such as cast blasting

Chinese inspiration
The original DM30 has been widely used in China and it is here that the inspiration for the design of the DM30 II originated. It is also here that the new version is being manufactured. Hubert Luo, Product Manager for Atlas Copco in Nanjing, tells M&C: “With its small ‘footprint’, light weight and low cost, the DM30 has been a continuous success story and therefore very little has been done over the years in terms of product development.

“However, in the last few years we have been gathering information from our DM30 customers across China and this feedback convinced us to go for a complete design upgrade.

“The DM30 II is even easier to use. The quality is better and both the capital and operating costs are low. It also comes with many more options that will make this version even more popular than its predecessor­.” 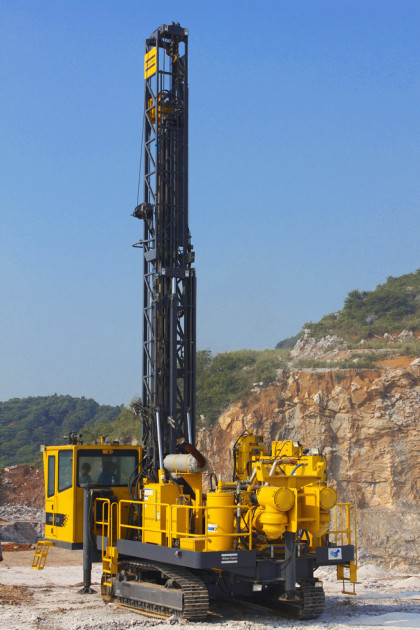 Atlas Copco DM30 II - The new kid on the block.