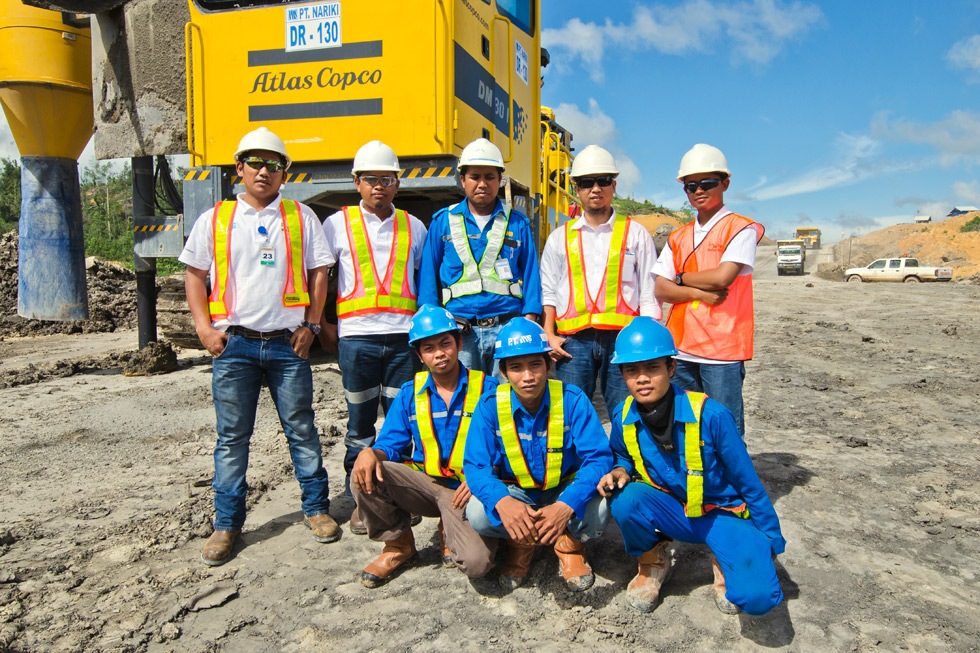 Surface Mining
The drill crew of Nariki Minex Sajati pose for the camera during drilling at the Prima Sarana Gemilang coal mine on the Indonesian island of Kalimantran.

DM30 II – In the coal of Indonesia

The majority of blasthole drill rigs in Indonesia are used in the coal industry and the Prima Sarana Gemilang mine is a typical example. Located on the island of Kalimantan, the mine has Atlas Copco DML and DM45 drills on site and the upgraded DM30 II was recently added to the fleet.

According to drilling contractor Nariki Minex Sejati, the new addition has increased flexibility by providing more choices in the 171 mm – 200 mm (6.5–7.8 in) hole range.
Jerry Murthi, second generation owner of Nariki, says: “The ground on Kalimantan isn’t too dense and doesn’t need much more than a good bump to break it up.”

He says the 200 mm capability of the new DM30 II allows his company to drill larger holes and sufficiently sized patterns, yet smaller holes when necessary.

Nariki operates at about 15 mine properties in the country and Murthi says the company’s success is based on “drilling with the right equipment in order to provide a mine with the most efficient drilling option”.

The company has larger drills but says it almost never needs to drill a 228 mm (8 in) hole or larger.

“We drill mostly with a burden of 7–8 m and 8–9 m spacing. The maneuverability of the DM30 II is great. Having the drill rig that offers more options because of its size is a benefit to the mine and also helps with mine planning.”

The mine has two pits and before drilling began, ripping was used to break up the claystone and sandstone formation. The rock is just hard enough that blasting results in more productive excavation.

The formation breaks well with an 8 or 9 m burden and 9 to10 m spacing. Handik Setiawan and Jos Bernadus Manulang, Drill and Blast Supervisors, explain that they are still adjusting the pattern based on variations in clay or sandstone rock.

In addition, they have to contend with a layer of coral in Pit 1 that lowers productivity from an average of 56 m per hour down to 40 m. Pit 2 averages 48 m per hour, drilling with the DM30 II.

There are eight seams being mined here. Drilling is generally done during a 10-hour period each day, although mining operation­s continue 24 hours a day in two shifts. The benches in both pits are 8 m high. The coal sits on a 30 degree incline in seams ranging from 5 to 30 m in thick­ness.

The stripping ratio is 7 to 1. Mining began at an elevation of 90 meters and is currently at 20 meters above sea level. Exploration is continuing to determine the total depth of the coal formation. The mine is operating on a five-year excavation plan including the opening of a third pit.