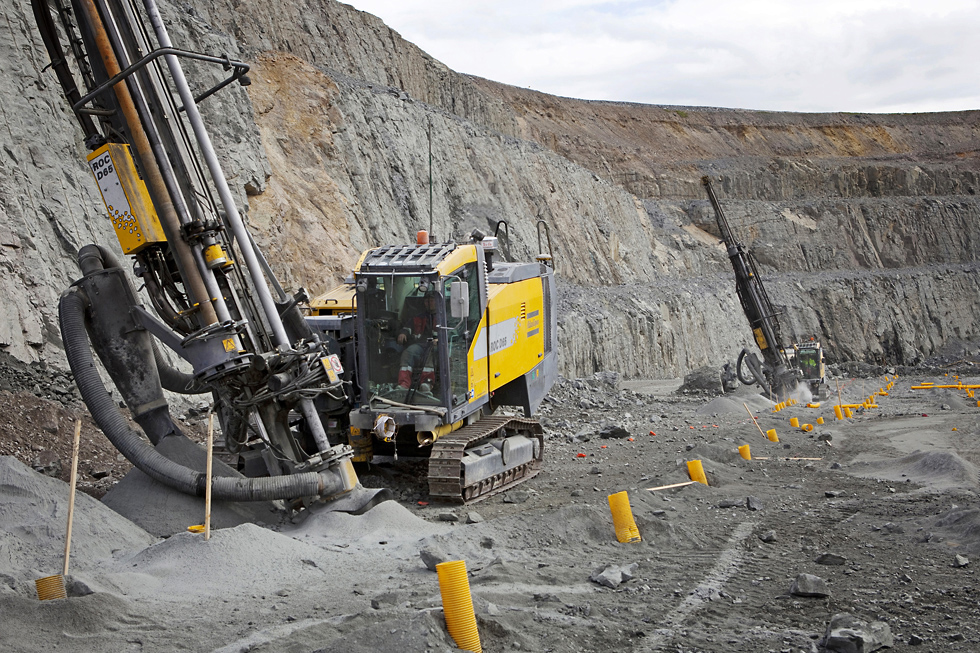 Technically Speaking
Model of efficiency: At the Aitik mine in Sweden the SmartROC D65 drills a row of presplit holes 33 m deep at an angle of 20 degrees (from the vertical).

A better way to presplit

Presplit drilling is common practice in open pit mines around the world but the results often fall short of expectations. The soluton is optimization using a unique
combination of drill rigs to form the perfect presplit partnership.

Presplit drilling is nothing new. It is widely used around the globe and generally accepted as the standard method of creating safe final pit slopes for open pit mining. At the same time, there are many mines that could take advantage of the huge savings that can be gained by optimizing this operation using modern presplitting technology.

Perfect partnership
When it comes to blasthole drilling, large hole drill rigs such as our Pit Viper series drills couple-d with our FlexiROC D60/65 and SmartROC D65 crawler rigs, is without doubt the smartest partnership.

At the Chuquicamata mine in Chile, for exampl-e, pre-splitting with ROC L8 rigs has been in operation for more than
10 years. It started with a fleet of two rigs drilling around 25 000 m per month. The concept proved beneficial and the operation has now grown to more than 100 000 m per month, carried out by a fleet of 20 rigs operate-d by the Chilean presplitting service contractor Servicios Mineros.

In Australia, the presplitting specialist Rock Australia provides these services to mines all over the country using a fleet of about 10 rigs including ROC L8 and SmartROC D65.

Meanwhile in Sweden, presplitting is a major part of the operation at the Aitik mine with ROC rigs doing the presplitting work and Pit Viper rigs taking care of the production hole drilling. Here, 165 mm presplit holes are drilled at 20 degree angles on 33 m double benches. The holes are spaced 1.8 m apart and are fired just ahead of the blastholes. By the way, Sweden and Australia also lead the way towards greater productivity using our SmartROC platform.

It is easy to see that these mines all have one thing in common – presplit holes that are perfectly straight and parallel, slopes that are close to the planned angle of the final pit wall and benches that are smooth and stable.

Unfortunately at other mines, the opposite is a common experience; presplit holes that take off in different directions, a lot of waste rock that has to be blasted and hauled away at great cost and uneven slope walls that crumble and collapse over time.

Large rigs versus ROC
Often I find that mines with poor slope stability tend to use their large blasthole drill rigs for both production and presplitting and this is not cost-effective. Large rigs such as the Pit Viper series are excellent for production drilling and although they can be used for down-the-hole (DTH) drilling up to 229 mm (9 inch bit dia.), they are not intended for presplitting.

Such machines are oversized for this application which makes them difficult to position in a tight spot in order to drill a row of parallel, closely spaced pre-split holes. In addition, the angle drilling option on the Pit Viper only allows the tower to be tilted backwards in increments of 5 degrees and the diameter of the holes they drill are too large for the small charges of explosives required in order to obtain a good result with the presplit blast. Also, when the drill has to be moved to another bench, this can take a long time to prepare, especially for the electric powered version.

Small, flexible ROC rigs on the other hand, such as the ROC L8 series and SmartROC D65, are specifically designed for presplitting. They are much more flexible and can drill a variety of angles on a very narrow berm with great precision. For instance, the ROC L8 is only 2.5 m wide, it can drive on the berm and also drill sideways at an angle of 32 degrees or more.

Versatility = accuracy
As the stability of the rock in an open pit mine determines the slope angle, and stability can vary from area to area, the resultin-g slope angles for the pit wall are not always in round figures. They could be 18, 23 or 27.5 degrees, which is why a presplit rig must be very versatile. The Atlas Copco rigs are specially designed so that the feed can be fixed at fractions of an angle. But performing presplitting on fixed angles such as 5, 10, or 15 degrees from the vertical, as is the case with the production drills, clearly makes it more difficult to follow the open pit design.

With ROC rigs, presplit holes can always be drilled as planned. Furthermore ROC rigs are not just better at presplit drilling, they can also be used for a variety of other tasks such as leveling benches for the large rigs, complementary drilling of buffer holes up to 203 mm, drilling long, horizontal dewatering holes or using the Reverse Circulation (RC) option for in-pit grade control.

The newer SmartROC D65 has taken these capabilities to an even higher level with the hole navigation system (HNS) which helps the operator to locate the right spot without having to mark the holes, auto-alignment of the feed to align the holes correctly and find the right direction and angle for collaring. It can also use a wide range of hammers for optimum drilling between 110 mm and 203 mm. And all this combined with full drill cycle automation which practically reduces the operator’s job to supervision.

A fleet consisting of large drills and ROC rigs is, in my view, the most optimal presplit and blast hole solution on the market. And in these tight economic times when it is important to keep operating costs at rock bottom, this is one area in the mining process where fortunes can be saved.

At the same time, it should be remembered that this is not just about money. It is also a matter of creating a safe working environment which is equally or perhaps even more important. Safety has always been priority one in open pit mining. Creating safe pit walls at the desired angle is a must for a safety-conscious operation.