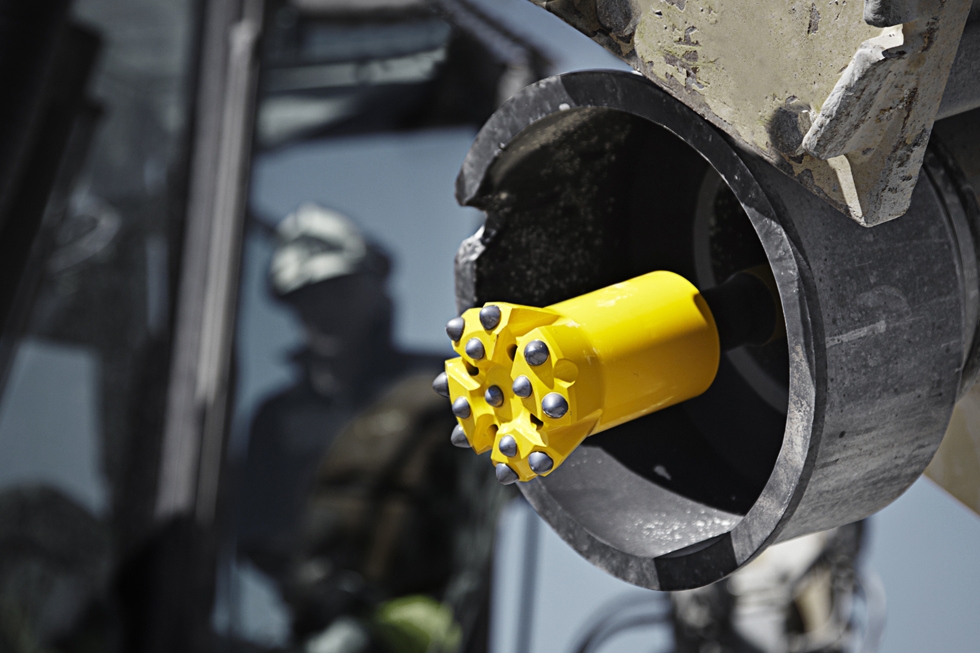 How sharp rock drilling tools put money in the bank

Drillers looking to lower their running costs don’t have to look much further than the buttons on their drill bits. Sharp bits make money. Worn bits lose money. It’s as simple as that.

There are no rules that say drill bits must be resharpened. Once they have been worn down, they can simply be thrown away and replaced by new ones. In fact, that’s common practice among many drillers around the world. However, with every bit they throw away, they also throw away a great deal of money.

In order to drill a hole effectively, all drill bits need to be kept in good shape throughout the drilling process and to understand why this is so important we need to first look at the way a drill bit is designed.

The button bit, for example, which is the most superior variety, is equipped with a number of tungsten carbide buttons arranged in a special way on the bit head to effectively crush and break the rock. These buttons have either a spherical or ballistic design and are well tested to give optimal penetration rate, life length and hole quality.

Naturally, the amount of wear that these bits can sustain differs depending on the rock conditions but our recommendation is that they should be kept sharp at all times to give optimal penetration.

It is worth noting here that a worn bit reduces the impact energy at the bottom of the hole which can not only loosen the threaded joints in the drillstring but also creates excessive heat which destroys the joints. In addition, as the buttons begin to wear down and become flat, the size of the space used to evacuate the cuttings is also reduced, which means the cuttings have to be recrushed into smaller particles. And last but not least, a worn bit makes it much more difficult to drill a straight hole, and straightness is of course essential for optimum blasting and fragmentation.

While all of these factors are obviously important, it is the overall effect that worn bits have on the efficiency of the whole drilling operation that really counts. We have studied the impact of worn bits in a large variety of drilling scenarios and the results show that drilling with sharp bits improves total drilling efficiency by up to 30% per year, taking all cost factors into consideration.

Keeping them in shape

Having established that sharp bits pay off, what’s the best way to keep them in good shape? As a rule, the time to regrind a bit is when roughly one third of the button has been worn away. When half of the button or more has gone, it is “overdrilled”. We estimate that an overdrilled bit causes penetration to drop by as much as 30–40% and that the life of the drillstring components is reduced by the same percentage.

Bits are reground using either grinding cups or grinding wheels, with the wheel being by far the best choice. When the cup becomes worn, it goes flat and cannot restore the button to its optimal condition, especially if it is a ballistic button. To compensate for this, the cup has to be changed more often and the cost of regrinding then becomes unreasonably high.

The wheel, on the other hand, has a diamond coating on a steel base, so when it begins to wear, the diamond grains first lose their cutting edge and ultimately come off completely. Throughout the process, the wheel keeps its shape and is therefore able to restore the buttons to their optimal condition until it is completely worn out.

Grinding bits is not difficult but a good knowledge of bit design and an understanding of why the bit should be reground is essential. For example, a bit may last for 500 drillmeters with good penetration – a job that can be done in a couple days. But if the bit is not reground, the penetration rate decreases dramatically and it will take much longer to complete the job.

A bit that is reground as recommended will complete 500 m in 15 hours, drilling at 35 000 revs (1 000 000 blows). If the bit is not reground, the driller will often assume that he can continue with the same bit until the required depth is reached. In fact, although the bit will actually last for 15 hours (with the same revs and blows) it will drill only 350 m in that time due to the decrease in penetration rate.

To continue drilling another 150 m with a worn bit might not be possible or will lead to an even greater loss of penetration and dramatically reduce the life of the equipment, not to mention the extra expense for wages, fuel and maintenance and other costs that come with having to drill longer than necessary on each hole.

Now let’s look at how this affects the other components. With five rods in the drillstring, 5 000 drillmeters can normally be completed in 90 hours. With a decrease in penetration of 30% (at 210 000 revs and 6 000 000 blows), the service life of the drillstring, including rods, shanks and couplings will be reduced to only 3 500 drillmeters during the same period.

In addition, if the driller’s contract runs for a long period of time and he consistently looses penetration rate due to worn bits, he will need to get help to fulfill his commitment, perhaps this will mean engaging another rig and an additional operator, causing even more expense and less profit on the bottom line.

We estimate that it costs approximately USD 0.15 to grind one button so our recommendation is clear. Insist on regrinding bits before they become overdrilled. Only properly sharpened bits can do the job they were originally designed to do.