Aboriginal artefacts on heritage listed rock and a mine with economical interests have been the basis for an unusual and technically difficult job carried out in Werris Creek Mine, Australia. Handheld hydraulic products from Atlas Copco have been the key to carry out this sensitive job successfully.

The open cast operation is located on property that extends over 1500 acres in hilly countryside, 80 km inland from Tamworth. Aboriginal artefacts had been found in the mine area already in the early 1900´s. On the top of a hill nine locations of rock holding rubbing grooves had been identified as aboriginal artefacts as well. Five of them have been firmly attached to the conglomerate rock forming the hill, four of them laid loose on the ground.

A considerable volume of coal was lying under this hill. Atlas Copco was asked to find a method to remove them without damage and store them in a safe place, until they could be placed back in their original locations after renaturation of the area.

Since land development in classified heritage listed areas is generally prohibited, a potential cultural conflict was to be prevented. Negotiations were difficult, but at the end an agreement was reached between Mine Management, an Archaeologist appointed to the project and four aboriginal tribes who had links to the site.

Under very strict controls, permission was given to undertake the project, supervised by an archaeologist with an Aboriginal tribal elder present to ensure adherence to their religious and cultural needs.

Mopieka Holdings Pty. Ltd., owned by Bruce Garland, the contractor of this job, decided to use the following Atlas Copco equipment: 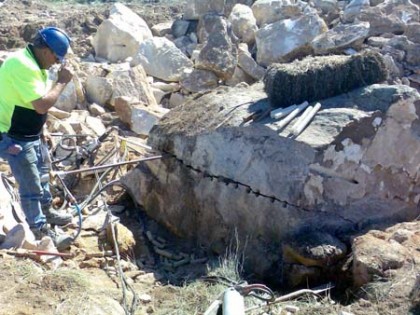