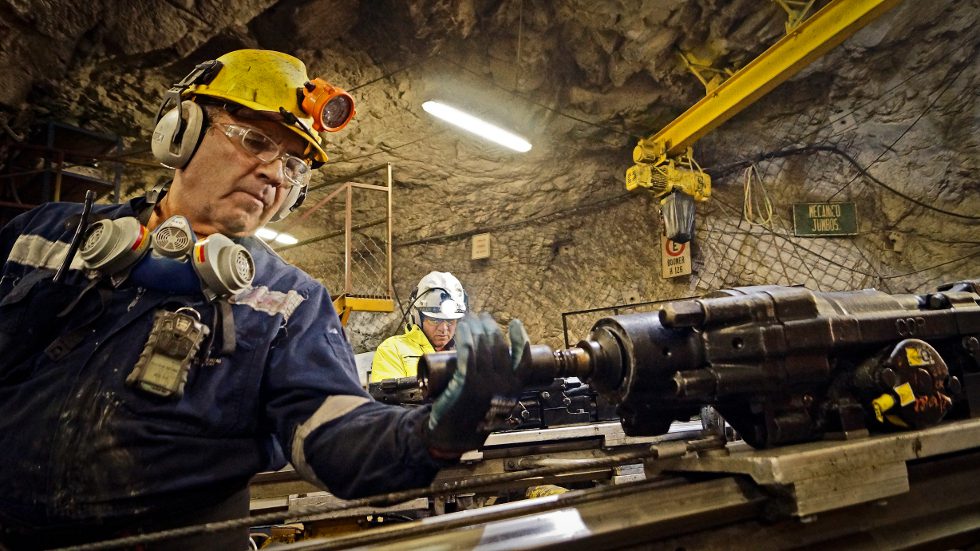 Turnaround in the andes – significant increase in equipment availability

When Chile’s El Sauce copper mine launched an investigation into the reasons for its declining productivity, the low availability of its drilling equipment was identified as key factor. What came next became as industry “first”.

The El Sauce mine in Chile, owned by the Las Cenizas Mining Group, is believed to be the first company in the mining industry to renew its entire fleet of rock drills as the pathway to a more profitable future. Located about 170 km north of Santiago, the capital, El Sauce had been suffering for some time from declining productivity, and in mid-2014 an investigation was launched to indentify the cause.

After several months, investigators announced they had found the source of the problem; excessive downtime of production drilling equipment due to insufficient service and maintenance of rock drills. As a result, a plan was launched to optimize rock drill availability with the support of experts from Atlas Copco – a cooperation that subsequently led to the renewal of all rock drills and hoses.

Atlas Copco repurchased the complete range of existing rock drills (a total of 27) and then replaced them with 12 new ones. These comprised four COP 1435 and eight COP 1838HD+ models. In addition, Atlas Copco provided technical assistance with fitting the new drills in the underground workshops and with optimizing their performance at the various drilling sites.

Besides this exchange program, the team found that the under-performing rock drills were also affected by the reliability and availability of the fleet’s hydraulic hoses which were being changed too often, adding even more to the cost of maintenance. As a result, all the hoses were also upgraded. These initiatives proved to be the catalyst for a dramatic improvement. Prior to 2014, the availability rating for drilling equipment was 60%. Today, it is 90%.

Raul Fara Engber, Head of Maintenance at El Sauce, says the benefits are easy to see in terms of productivity.

“Previously, it took a crew of skilled drillers four minutes to drill 48 holes,” he says. “Today, with the new rock drills, the same crew does the same number of holes in two and a half minutes. This means we are now drilling a face in about two and half hours, which is fantastic.”

Replacing the rock drill stock also revealed a surprising bonus. Tests conducted with the COP 1838HD+ showed that these models are multipurpose despite being designed for face drilling. Mounted on the fleet’s Simba rigs, they could be used for long hole ring drilling with equal efficiency and zero failures. It was also found that the new COP 1435 was sufficiently powerful and robust to install 2.5 m long rock bolts, a task that could not be achieved before the renewal.

According to Ignacio Flores, Product Manager for Mining and Rock Excavation Technical Service at Atlas Copco, the upgrade project and resulting turnaround at El Sauce is a landmark in the industry. “Such a comprehensive renewal project initiated by the Las Cenizas Mining Group is unprecedented,” he says. “To the best of our knowledge it has never been done before – and the results speak for themselves.”

Landmark project The upgrade project at El Sauce began in 2013 with the creation of a new department for Mechanical Planning. The mine management instructed the new department to come up with alternative ways to reduce costs and improve productivity. In previous years, the mine had budgeted for a maximum of two rock drill replacements per year for a fleet of 10 production drill rigs – four Simba long hole ring drilling rigs and six Boomer face drilling rigs, all from Atlas Copco.

Head of Maintenance, Raul Fara Engber, explains: “Due to this restriction we had accumulated many old and over-drilled units, and since these did not comply with recommended operating hours between service intervals, our consumption of spare parts was much too high and breakdowns and repairs were too frequent. As a result, our productivity remained low and our maintenance costs were too high.”

A large portion of these costs, he points out, went to replacing the hoses. “We are talking about more than 200 hydraulic hoses, so with a reliability factor of less than 70 percent it was a significant part of the problem.”

Fara adds that he made a bet that the COP 1838HD+ rock drill could increase the availability factor from 65 to 90 percent – and that’s exactly what happened. It also enabled the mine to increase the replacement cycles for hoses as failures were no longer a problem.

In agreeing to exchange the rock drill fleet, the mine had one stipulation – that the investment could be regained within 60 months, and here Fara emphasized the strong support provided by Atlas Copco in establishing the plan’s financial viability.

“Atlas Copco helped us present the project to our management by demonstrating that this expenditure would be reduced over time, while the benefits would be felt immediately. That’s why I say that it was not the Atlas Copco brand that was so important to our success, but the Atlas Copco people, as they were highly motivated to work with as project partners and saw it as a winwin for both parties.”

The work does not end here. Together with Atlas Copco, information on the service life cycles of the equipment is being gathered continuously, not just for drilling equipment but also involving Scooptram loaders, with a view to introducing further improvements.