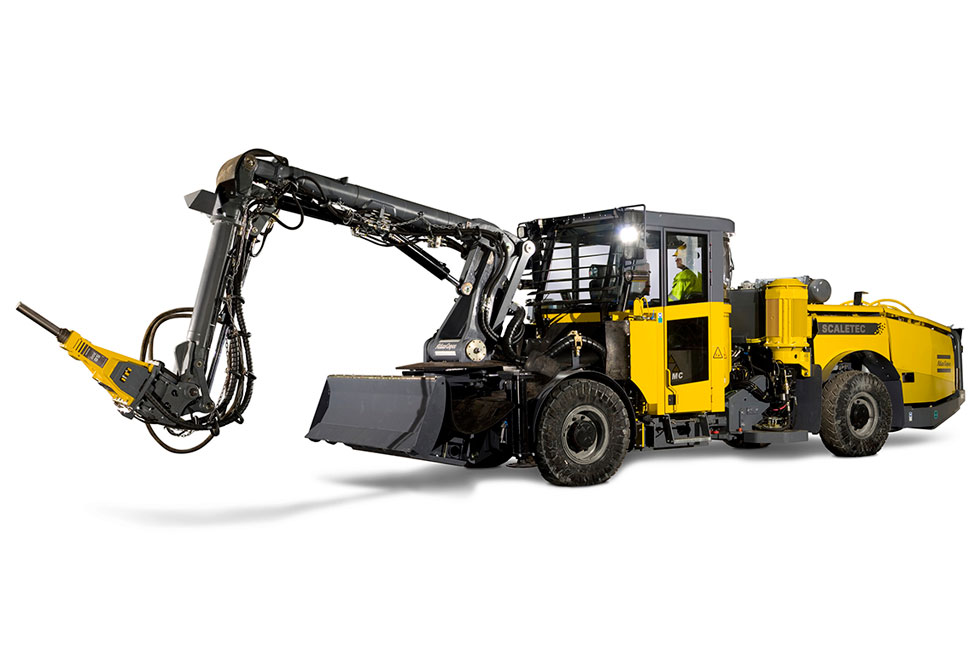 The Scaletec effect at Tara Mines

Mining equipment that makes a significant contribution to safety as well as productivity is in increasing demand. A good example is Boliden’s Tara Mines in Ireland – Europe’s largest zinc mine – where an investment in Atlas Copco Scaletec rigs for mechanized scaling has had a dramatic effect.

With safety as a key issue in the international mining industry, mines are increasingly looking for innovations that can help to reduce accidents and lost time injuries.

Although there is an element of danger in all stages of the mining process, whether on the surface or under ground, some operations are clearly more hazardous than others.

One of these is the manual scaling of walls, roofs and faces after blasting. This is often carried out with a hand-held scaling bar working from a platform on a utility vehicle in order to reach the areas to be scaled.

It is a physically demanding task involving considerable risk. In many parts of the world, miners use steel bars or even simpler tools to remove loose rock, which is even more demanding and dangerous.

However, mechanized scaling is being increasingly introduced worldwide and is having a positive impact on safety.

From manual to mechanized
A case in point is Boliden Tara Mines in Navan, Ireland, located some 50 km northwest of Dublin. Owned and operated by Boliden, the Nordic international mining group since 2004, the Tara mine produces approximately 2.5 million tonnes of ore for zinc and lead concentrate per year.

The reason for choosing this unit was its high performance, but also the potential improvement it could make in terms of personal safety for the mine’s 10-man scaling crew.

Today, Tara Mines has four Scaletec units in operation and Safety Superintendent John Grennan says the effect has been dramatic. In the four years since the Scaletec has been in operation, the number of incidents and injuries related to manual scaling have dropped to zero.

Says Grennan: “Mechanical scaling has been a huge advancement for us at Boliden Tara Mines. In the past, there have been serious injuries as a result of scaling off the muck pile, but these are now gone. We don’t have the exact statistics yet, but in my view this has been one of the better advances I have seen in my 37 years in the mining industry.”

In the normal working cycle, the Scaletec is routinely used after every development blast and also other times when required. Service and maintenance is easy and performed on site by the Tara Mines engineers. Prior to the arrival of the first Scaletec, scaling was mostly done by working either from the bucket of a scoop, the platform of a utility vehicle, or by standing on the slippery muckpile.

A ‘no brainer’
According to Peter Brewitt, Atlas Copco’s Business Line Manager for the UK & Ireland, the operators were doubtful but are now positive to mechanical scaling in their work places. “This is a major shift in attitude and confirms that they want to reduce the number of incidents between face drilling and bolting,” he says.

“In addition,” Grennan adds, “risk assessments that have been done indicate that mechanical scaling is a no brainer.”

Brewitt confirms that the Tara Mines operators like the ergonomically designed cabin and that Atlas Copco is making further improvements. Besides the Scaletec, the Tara mine has a fleet of Atlas Copco equipment including Boomer M2C twin-boom face drilling rigs, Simba long hole production rigs, Cabletec cable bolters and MT6020 Minetruck trucks.

Taking the risk out of scaling
The Atlas Copco Scaletec scaling rig was developed in 2005 to enable miners and tunnelers to tackle the hazardous task of scaling roofs and walls after blasting with maximum protection. Not only does the Scaletec improve safety for the scaling crew, it also improves the qualityof the scaling result which benefits overall productivity.

The rig consists of world proven components, notably the carrier, the hydraulic breaker and the comfortable, well protected operators’ cabin.

The breaker is designed specifically for scaling. It is constructed from a solid, one piece body that does not require side bolts, making it a much stronger unit. To optimize it for scaling operations, the breaker’s strike frequency has been increased at the same time as the impact energy has been decreased.

The boom covers an area of 9 m high and 11 m wide, enabling it to effectively follow the contour of the face, the roof and walls in most drifts and tunnels. In addition, the cab comes with a 375 mm vertical lift and a 15 degree tilt to provide the operator with optimum visibility. Positioning and control with RCS (Rig Control System), is fast and easy and an integrated water channel provides the hammer with water flushing for dust suppression.

Go here to watch the Scaletec in action: http://youtu.be/CrfNAHiCXDE