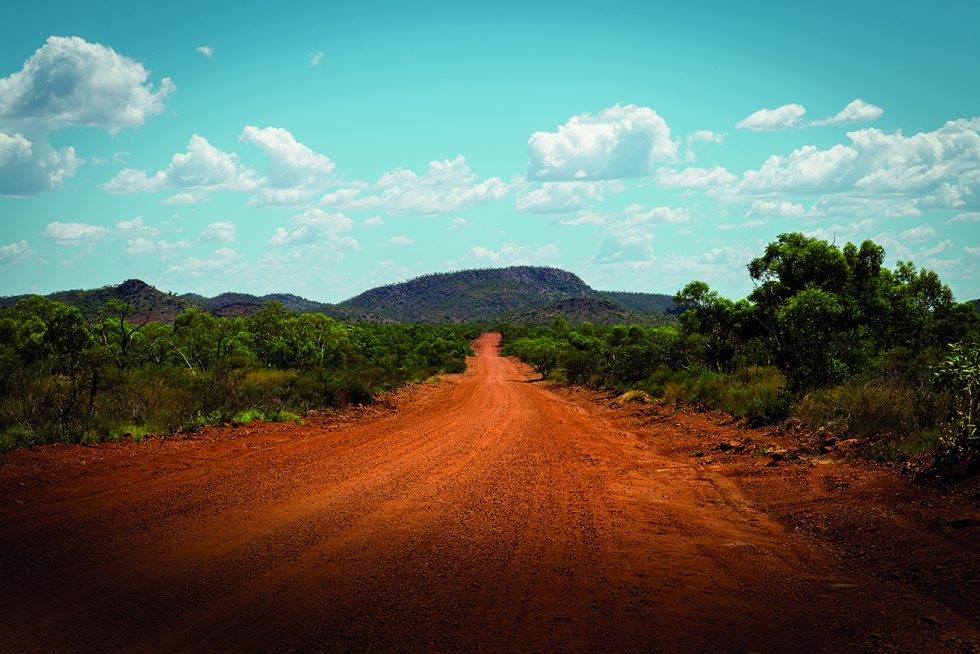 Turning up the heat – Roc-Drill joins the quest for copper with the help of COPROD technology.

At a mine in the north of Australia, Roc-Drill is joining the quest for copper with a pair of Epiroc SmartROC CL rigs. But here, hours from the nearest town and in a place where temperatures can inch towards 50 degrees Celsius, man and machine are pushed to their absolute limits.

The first thing you notice is the dust. It’s red – bright red – and it gets into everything. “It’s a nightmare,” says Roc-Drill Area Manager Graeme Jones. “And then it rains and it’s the mud.”

This is Crusader, an open pit copper mine in Northwest Queensland. We’re a two-hour drive from Cloncurry, the nearest town; 20 hours from Brisbane, the state capital. It’s the Australian desert, jagged Martian peaks dotted with knee-high ant hills and desiccated trees – yet it still rains.

A few weeks ago a years-long drought broke here, creating a vast inland sea. Crusader and its base camp at Mount Cuthbert, 25 kilometers (over 15 miles) away, were cut off for days, workers eventually needing to be helicoptered out. “When you hear Julius Dam has spilled you have eight hours to leave,” Jones says, idling his Landcruiser on the Leichhardt River as a bask of freshwater crocodiles crosses a weir in front of him. “Otherwise, you’re stuck.” 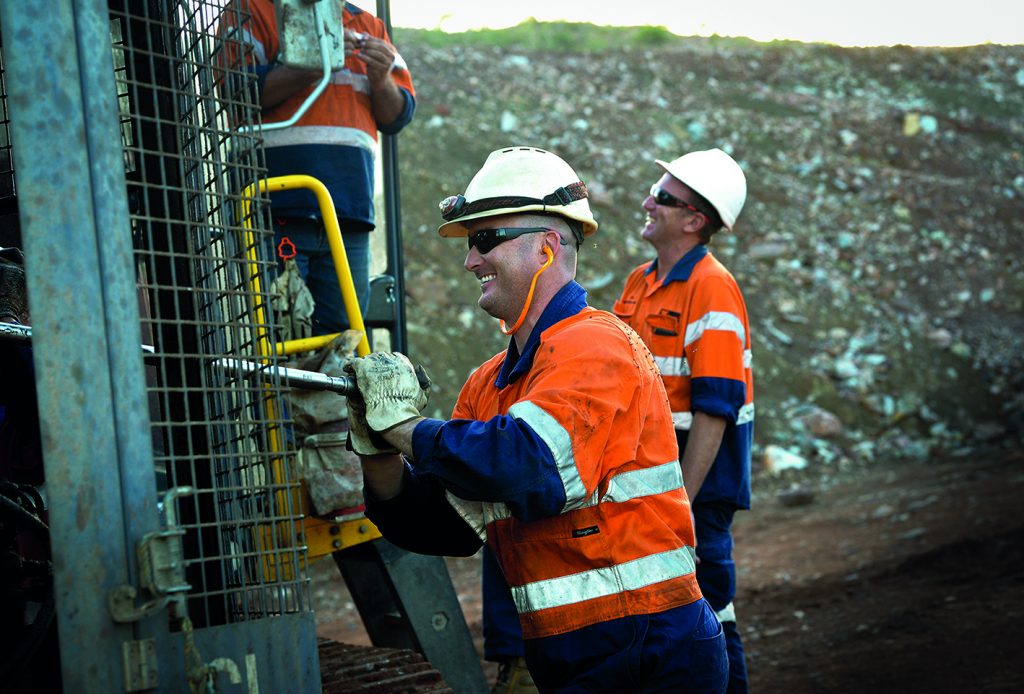 This is the wet season in Australia’s north and storms can appear out of nowhere. We experience it firsthand when a dark bank of clouds causes an early end of shift, Jones whisking us away from the pit in a line of LVs, orange lights flashing. A black curtain of rain and wind and dust rushes in the other direction, stabs of lightning and electrical activity enforcing an exclusion zone around a loaded shot. Jones grins. This is mining in the extremes.

“If you want to test something, bring it to Australia,” says Nigel Deveth, Managing Director of Roc-Drill, a Brisbane-based drilling contractor.

Roc-Drill was established in 2012 as an offshoot of Deveth’s existing company, Deveth Drilling Qld. Deveth’s own history with drilling dates back 32 years via companies such as Geothermal Industries, Deveth Drilling and the formerly family-owned Straitline Australia. For much of that time he has specialized in running Epiroc equipment.

Roc-Drill currently boasts one of the largest fleets of Epiroc crawler drills in Australia. It’s no surprise, then, that Deveth was the first in the country to take on a pair of new SmartROC CL drill rigs. Roc-Drill wanted to put the COPROD-equipped rigs to work in some of the more difficult ground jobs it tackles across Australia and Papua New Guinea. With the COPROD system, developed by Epiroc, the high penetration rate and low fuel consumption of tophammer equipment is married with the hole straightness and hole quality of a down-the-hole drill. 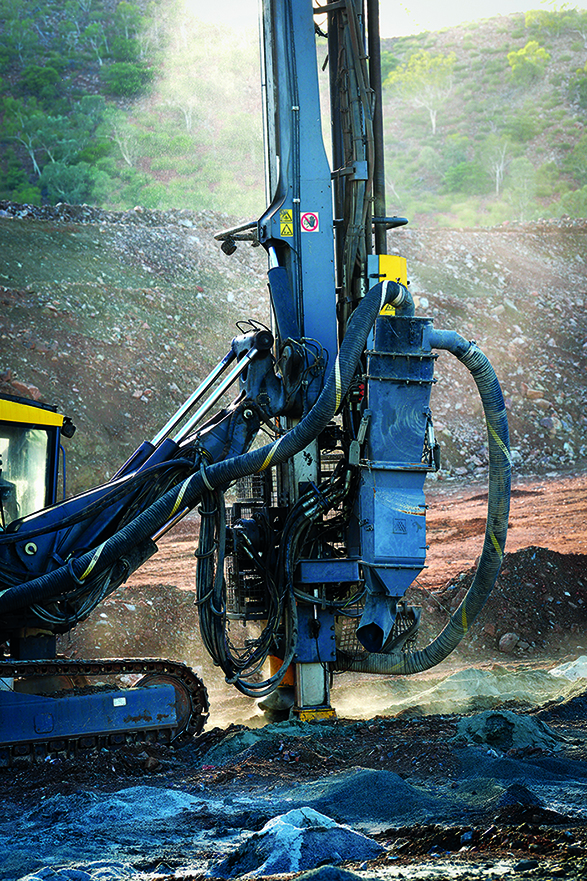 Drilling into soft earth can be slow going. But once they hit hard rock, the SmartROC CL drill rigs will come into their own.

“They have the potential to change how we drill into difficult rock,” says Deveth.

“It gives you increased penetration rate because you don’t lose percussive energy through the drill string because there are no joints. There’s better hole accuracy on a low pressure air system, and you’ve got no excessive wear through the increased velocity that you run a down-the-hole drill with. And there’s a much lower fuel burn.”

Not that Roc-Drill didn’t have to work to get the rigs operating effectively in Australian conditions. Deveth’s team spent months going back and forth with Epiroc to break in the SmartROC CLs at a mine near Cloncurry, adjusting hammer, feed and rotation pressures to better handle the mix of soft and hard terrain typical of Australian mines.

Crusader is throwing up similar challenges for Roc-Drill. This mine has existed in one form or another for over a century. Ancient rail infrastructure lies abandoned, blackened by the sun. Back then it was gouging and underground operations. In 2019, mine owner Malaco Leichhardt is involved in something much more complex, extracting copper sulfide ore from an area rich in dolomite, quartzite, talc and magnetite.

Working on a cutback in the mining pit, Roc-Drill’s two SmartROC CL rigs sit above the flooded pit void, drilling into one of Crusader’s old waste dumps.

The earth is soft and progress slow, with sodden clay regularly clogging up the drill bits. Operator Glen Hoyle takes care to collar his holes, expertly mixing the gray earth like a cake batter. It’s time consuming and chews through water, but it’s worth it. 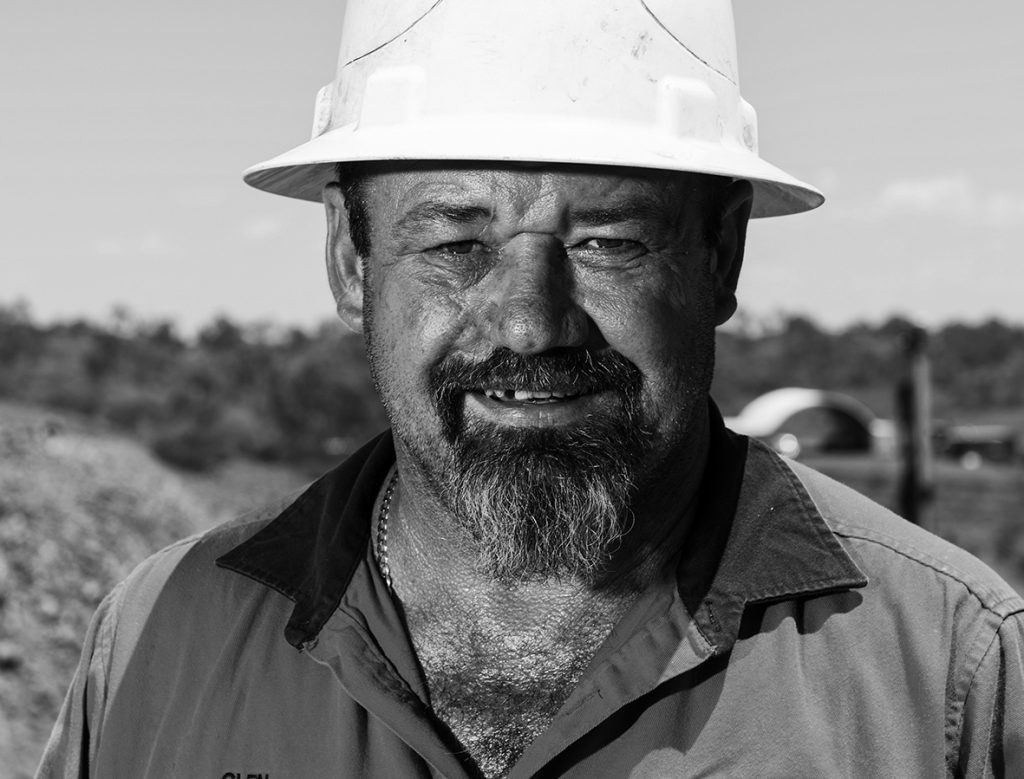 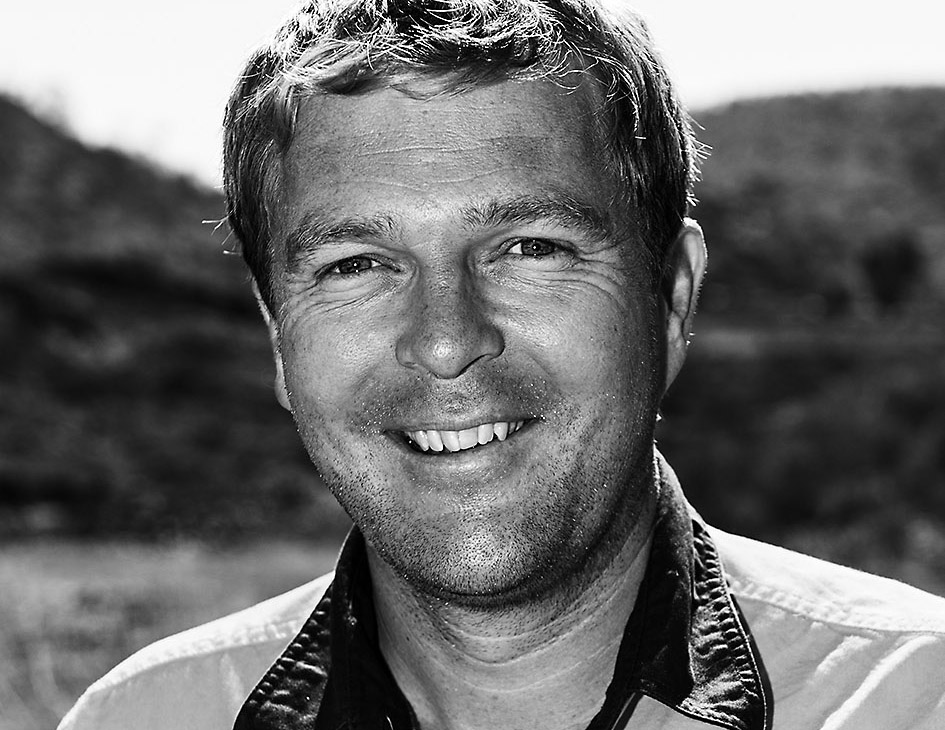 “It will be a couple of days before the bomb crew get here,” Hoyle says as he locks the CL into auto and lets it go to work. “The last thing you want is all that earth falling back down your hole. They’ll mark it up as a redrill.”

In some ways, Hoyle is simply biding his time. One of Roc-Drill’s 12-strong fleet of trusty SmartROC D65s would be just as capable on this soft terrain. But peer into the pit and you see what the SmartROC CLs are here for – the harder bedrock with its rich deposits of copper.

“Once we get to that harder rock, we’re going to get consistent pen rates. They’re really good machines”

I n good hard rock, this and a D65 together? It would flog it to pieces,” Hoyle says. “Hard rock is where these go really well.” Still, the penetration rates for this kind of earth are already high, and the SmartROC CLs are paying off in other ways. With a wider rod, the rigs can carry a smaller compressor to clear their holes, meaning a smaller engine and some eye-popping savings on fuel – “maybe half of what the 65s use,” Graeme Jones says. At Crusader, where temperatures can climb towards a whopping 50 degrees Celsius (122 degrees Fahrenheit) deep in the pit, it has other benefits. “With a smaller compressor, your engine isn’t working as hard,” Hoyle adds. “That’s keeping pressure off the engine. Here, you need all the help you can get. It’s as hot as hell.”

Otherwise, the SmartROC CL rigs drill straight and true, something not lost on Mark Killip, Mining Engineer for Malaco Leichhardt. Killip was already impressed by Roc-Drill’s ability to mobilize to site so quickly, and speaks effusively about the new rigs. 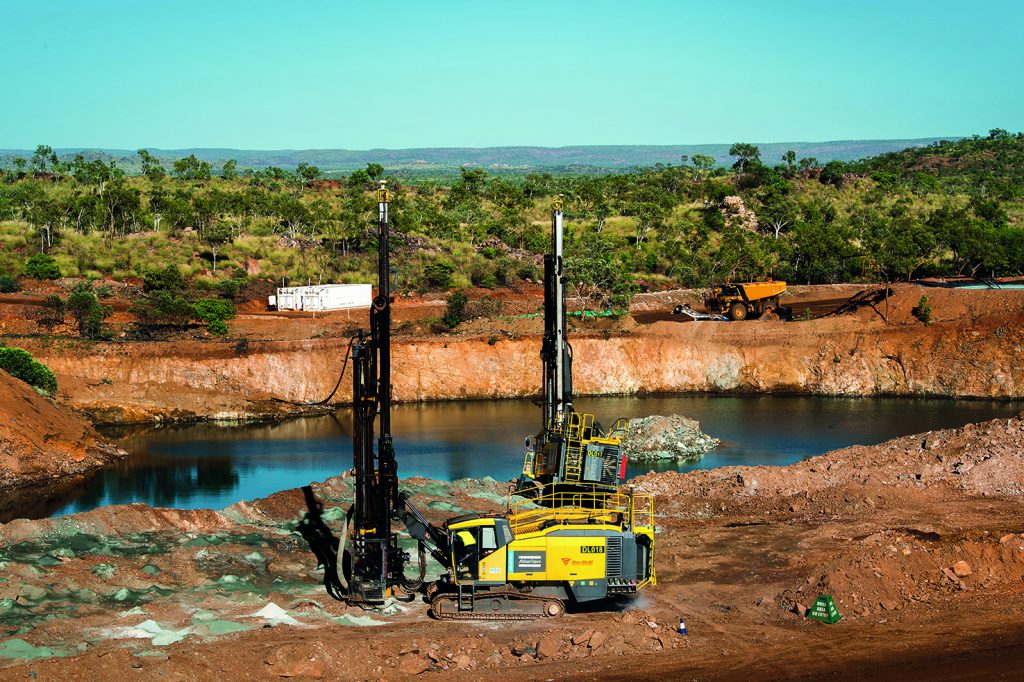 A smaller compressor takes pressure off the SmartROC CL’s engine, allowing it to better cope with temperatures that can inch towards 50 degrees Celsius at the bottom of Crusader mine’s pit.

“Those COPROD drills are fantastic,” he says. “For being able to get really good, consistent drilling on a range of grounds, they’re great. They have GPS, which takes away the hazard of putting people in the field. If there’s a slight change in ground conditions and it moves a couple of hundred millimeters, the GPS automatically accounts for that. Once we get to that harder rock, we’re going to get really consistent pen rates. They’re really good machines.”

Then again, with Roc-Drill breaking them in you’d perhaps expect nothing less. “We don’t mind being pioneers,” Deveth says. “These machines might not reach their full potential if introduced by another company. We don’t allow that to happen.”

“We’ve got a great reputation,” he continues. “There’s not one job where we haven’t been under budget for the client. We strive to continually cut costs for our business and these can be passed on to our clients. That’s what sets us apart. That’s why we have CL drills.”

Roc-Drill’s relationship with Epiroc spans 25 years. Roc-Drill has one of the largest fleets of Epiroc crawler drills, including the two SmartROC CL rigs, along with various other tophammer, DTH and rotary drills. The large fleet allows parts to be readily shared between rigs and jobs, ensuring high equipment availability. 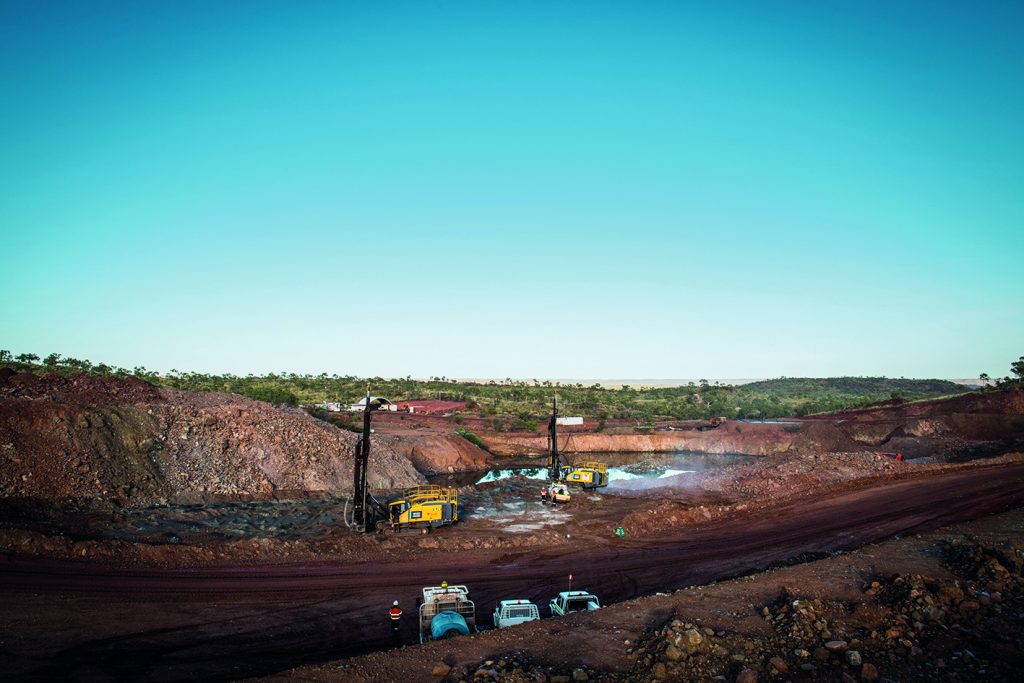