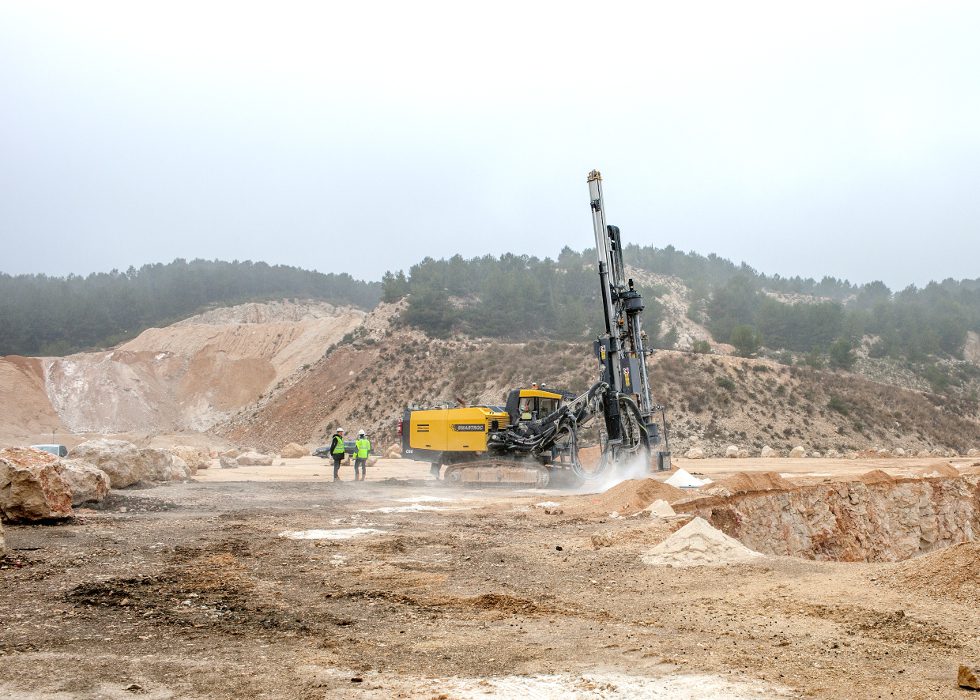 Certiq takes fleet management to the next level

Certiq, Atlas Copco’s new machine monitoring system, keeps equipment owners continuously updated on the performance of their fleets, paving the way for proactive maintenance and lower costs. Lhoist, owners of the Chaux de Provence quarry in the South of France, is a typical example.

The time: 5 am. The place: Provence, France. Drill rig operator Gabriel Gonzalez is already up and pulling on his overalls. He then drives to a local quarry and starts up his Atlas Copco SmartROC C50 drill rig. It is now 6 am. Meanwhile, Benjamin Dubar, who owns the rig, is somewhere else on the planet, perhaps in another time zone. But he is just one click away from the action. Dubar is Plant Director for Lhoist Southern Europe, the international contractor that operates the Chaux de Provence limestone quarry. And even when he is many miles away on business, he needs to stay on top of things.

For example, he wants to know the position of his rig, its fuel status, engine and hydraulic oil pressures, and whether there are any alerts that may need immediate attention.
He also wants to know how many holes have been drilled, and to what depth so that he can start up the blasting operation at exactly the right time. All this data is now easily accessible, provided he has access to the Internet. And this is the way drilling is being increasingly managed in the 21st century.

Lhoist is one of many European companies to be making use of Certiq, Atlas Copco’s new telematics* system, and gives equipment owners like Dubar a complete overview of his operations in real time, 24/7, from anywhere in the world. Certiq gathers, compares and communicates vital equipment data to the user via a web portal. The information is presented as tables, graphs and bar charts for each individual machine in the fleet.

From now on, Atlas Copco will be successively rolling out the Certiq system on the majority of its mining and construction equipment, both for surface and underground applications. The advantages of this are plain to see. For example, maintenance can be truly proactive as it can be organized in real time. This reduces downtime, and enables maintenance to be carried out at the most convenient times of the day. Troubleshooting can be done from a distance, aided by alerts and historical data archived in the system. And it also helps company’s like Lhoist to identify areas that are in need of improvement, perhaps requiring additional operator training.

The SmartROC C50 surface drill rig was an early adopter of Certiq and was delivered to Lhoist in 2015. Quarry Manager Joel Martinez, who was in charge of testing the system, opted for the professional version. In addition to Chaux de Provence, the rig is used at two other Lhoist sites in France and is estimated to operate around 1 000 hours per year.
All operations are covered by Atlas Copco service agreements for rock drilling tools and rig maintenance. An Atlas Copco technician also services the rig at 250 hour intervals.
The data that is gathered and presented by Certiq is used as an information hub to guide the efficiency and timely supply of parts and maintenance. Dubar says: “I was very conscious of my responsibility to choose the right rig for the Provence operations. With a single machine covering three sites, I could not allow downtime to become an issue.”
It also meant taking a bold decision to change equipment, method and supplier.

The company tried a number of drill rigs from various manufacturers before opting for the Certiq-ready, SmartROC C50 with COPROD. “Certiq allows us to get technical assistance without time and mileage to the benefit of everyone concerned,” Dubar points out. “I think it is potentially a very important development. We have only been using Certiq here for a few months but already I can see that it has many advantages. It will be very useful to be able to check the status of our machines wherever I happen to be at any time. But more importantly it should lead to more proactive service and maintenance which we believe will reduce our costs.” Besides Certiq, Dubar says he was attracted by the SmartROC C50’s low fuel consumption which has been reduced from 45–50 liters/h to just 20 l/h. He also noted that drilling efficiency has been increased by 50% in good rock conditions and 30% overall. Matthieu Pasquazzo, Product Manager at Atlas Copco France, says: “In this age of Big Data, we are convinced that Certiq will become an invaluable fleet management tool. Moreover, it is a major advantage for equipment owners like Lhoist to be able to source this technology together with a top class drill rig plus consumables and service all from the same supplier.”

The SmartROC C50 rig’s COPROD drilling system gives the same hole quality as DTH (Down-the-Hole) drilling but with faster rock penetration and lower fuel consumption. The rig is equipped with a COP 3060 hammer and 115 mm-diameter Secoroc bit. The COPROD tubes are 3.6 m long and 102 mm in diameter, with eight tubes in the carousel and one on the rig, commonly known as an 8+1 configuration. At the Chaux de Provence quarry, the rig drills holes at a 7-degree angle from vertical on 15 m high benches. This requires a 17 m deep hole with 50 cm of subdrill. The pattern is normally 4.0 m x 4.5 m and blasting of 15–20 holes is carried out once or twice a week. It takes 18 minutes to drill each hole compared to 25 minutes with the company’s previous DTH machine.

Operator Gabriel Gonzalez was a major influence on the company’s choice of the SmartROC C50, and although he has mainly worked with DTH drilling in recent years he says he has had no trouble making the transition to COPROD. “This is my third drill rig and it is the one that is most compatible with our requirements,” he says. “The automatic mode is very efficient. If I’m careful with the first tube and the first hole is done well, the rest can be drilled in automatic mode faster than I can drill them manually.”
He uses five of the nine available tubes which gives him up to 18 m. “Previously, we used five meter tubes with DTH, so we only needed four to complete a hole,” he continues. “However, the higher drilling speed and fast tube changing function more than compensates for this. I changed the DTH bit after 4 000 meters while the bit I am using now has done 13 000 meters and it still has life in it.”