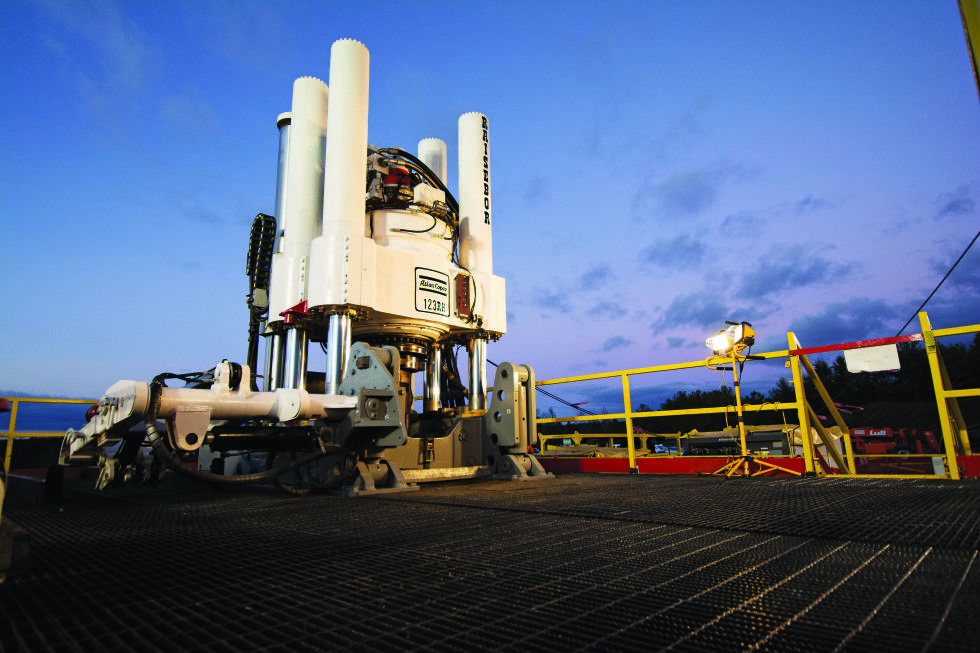 Measuring 8 m in diameter and 439 m deep, the new access shaft at Jim Walter Resources’ Number 7 coal mine in Alabama, is a major feat of engineering. It is also just possibly a world record in large diameter raiseboring.

It was on December 7, 2014, that Raisebor, a division of Cowin & Company Inc., completed the record raise using its Atlas Copco Robbins 123RH C raiseborer equipped with a multi-modular wing system (MMWS) reaming head.

The task was to provide the mine with a utility and access shaft closer to the working face to increase efficiency.  It was taking roughly one hour for workers to reach the face which meant that almost 25 percent of every 8-hour shift was being lost to commuting.

It was Raisebor’s third project after acquiring the Atlas Copco machine. The first two were 6 m in diameter so the new project was not only much larger but also more complicated. To start with, a massive concrete foundation, 9.7 m thick, had to be built on the surface, prior to building the platform for the machine to stand on, requiring the removal of 2 500 m3 of material.

Designing The Moose Rick Sidwell, General Manager of Raisebor, worked with the Atlas Copco design engineers to develop the huge reamer head. “They respected my input.

We discussed what needed to be done to make it better,” he says. “We put extra wing cutters where I felt they were required and I appreciated the flexibility that was demonstrated by
Atlas Copco.”

Called “The Moose”, the reamer head was based on the largest existing reamer in the Atlas Copco range. It consists of a 122 cm wide core and two 122 cm wide intermediate wings. Up to eight outer wings extend the cutting diameter to 8 m.

The outer wing design was intended to allow efficient cleaning of the head. It uses 5-row Standard Magnum cutters in pairs with a 2.5 cm spacing. The wings are also designed to be removed to make underground transport easier and can be operated with as few as four wings. Raisebore discovered that six wings was the best option for keeping the head clear of  rock build-up.

Each 355 mm Atlas Copco Secoroc cutter weighs more than 150 kg. Of a total of 50 used during the project, 35 completed the job. Others were replaced because of damage caused by a large chunk of rock that broke away from the face. However, the cutters showed little wear.

The cutting face was so wide that for each rotation of the inside cutters, the outside cutters rotated 22 times. Rig operator James Bass said it was the most powerful raiseborer he has ever used. “I could feel more power and better control, and when I made a correction, there was almost an anticipation of my actions,” he says. “I could feel the changes in the formation as it happened and change the drilling parameters smoothly and as necessary.”

According to Drill Superintendent Willy Hicks the machine performed well throughout the project and he credited the operators who kept an eye on the controls and made the process look easy.

Average advance was 14 cm per hour, but formation changes made boring speed inconsistent. The formation showed a thin layer of coal then sandstone. In a 24-hour period, the raise was advanced 2.5–3 m in two shifts, which was a little ahead of the estimated 1 m per shift or 2 m per day. Throughout the project, the advance was better than projected.

“This is an amazing piece of equipment,” Hicks said. “Previously we had to move pipe with a chain hoist. Now we have a modern pipeloader. It grips the pipe up to 138 bar to thread on the connection.” This increases user friendliness and safety for the operator. The formation’s high angle fractures with varying changes throughout the formation made it difficult to ream.

“Because the head is so wide, I could be pulling through hard and soft formation at the same time,” he explained. “Pulling slowly through it, though, I could feel the torque change. The rpm and force showed constantly on the control panel, and I could hear and feel what needed to be adjusted more than I could see it.” The average speed of the head was 2.5 rpm. The average thrust was between 1.6 kN and 3 kN (kilonewton) and the torque was at or below 475 kNm.

Operator Eric Todich agreed with Bass’s assessment of the controls, saying, “The reaction with the 123RH C raise drill is quicker, yet it takes time to adjust after the command. This is
almost a safety factor.” He adds that the control allows for adjustments in the formation so there is no damage to the rig or drillstring. The machine’s antijamming feature also prevents damage.

When rotation pressure moves into the red range on the control panel, feed pressure backs down. Although the machine is rated for 3–7 m diameter holes, Raisebor’s record achievement has now proven that much larger raises are possible.