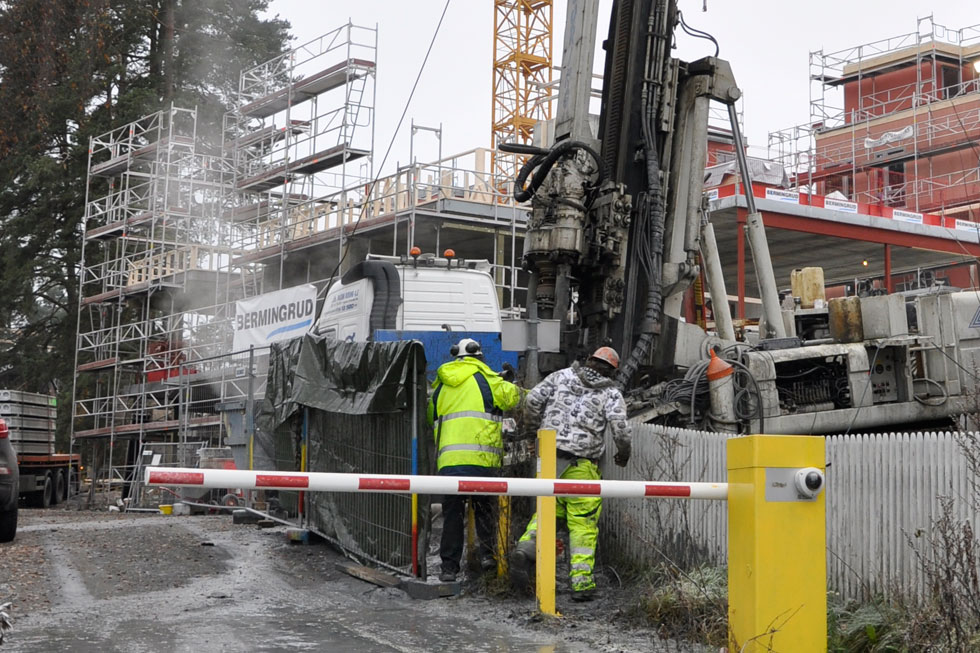 Surface Mining
Putting EDGE to the test: Here the equipment is used in the drilling of nine, 500 m deep holes for a major apartment complex near Oslo.

Why Norway Has EDGE

Today’s advanced equipment for drilling geothermal energy wells enables operators to achieve optimal drilling results. Båsum Boring of Norway is one company that has found the perfect edge that puts them ahead of their competitors.

With the considerable capacity of today’s compressors compared to those of 10 years ago, companies specializing in geothermal drilling can substantially improve their productivity.

However, drillers are also drilling deeper holes and finding it increasingly difficult to check the impact of the hammer or the condition of the bit at great depths. Deep drilling increases the risk of getting stuck in the hole and many drillers compensate for this by over-flushing which wastes both time and fuel.

To meet these challenges, Atlas Copco Secoroc has developed Secoroc EDGE, a system which gives the driller immediate feedback from the hammer in the hole. Based on the world’s leading software and sensor technology, the EDGE hammer’s impact frequency and power is shown in real time on the driller’s display screen.

One of the first companies to successfully put this new technology to the test is Båsum Boring of Norway. Båsum immediately saw the advantages of optimizing its drilling processes and agreed to test the EDGE system in combination with the new QLX 40 and QLX 50 hammers, both of which are optimized for deep hole drilling.

Tests have been conducted at several geothermal sites since May last year, including the drilling of nine, 500 m deep bore holes for a major apartment complex in Asker, just outside Oslo.

Båsum Boring was founded in 1952 and is today one of Norway’s leading specialists in energy drilling. The company has 45 employees and 18 drill rigs working at various locations. It is also the only company in the country to have purchased its own Hurricane booster compressor from Atlas Copco in order to be able to drill wells deeper than 300 m.

During the tests, the EDGE system proved to be especially successful in deep wells where there was a large influx of water. The first three wells were drilled and monitored with the EDGE system but the drilling data was recorded and not made available to the driller. The next five wells were monitored in the same way, but this time the information was made available to the driller who used it to optimize the drilling parameters.

The average rate of penetration increased from 34 m/h in the first three wells to 46 m/h in the next five wells. The well drilled in the shortest time took 8 hours 2 minutes to complete – 1 hour 40 minutes faster than the average drilling time for the first three reference wells.

Nils Hanstad, Section Manager and part owner of Båsum Boring, says: “One of the biggest challenges we have is managing the large amount of water we run into during drilling. From 260 drillmeters deep, we have encountered water influx of 40 000 to 50 000 liters per hour. You have to have really good equipment to be able to shovel up that much water!”

He continues: “It is very time-consuming to have to get rid of that amount of water. With EDGE, we are still able to drill optimally, despite large amounts of water coming in. We save time and the total amount of water is reduced. Other big advantages are that diesel consumption is considerably less and the bits last much longer.”

Fuel consumption for the five wells drilled using EDGE was 400–500 liters less than for the first three reference wells. Four bits were used and all four achieved 1 000 meters without the need for regrinding.

In addition to the immediate information provided to the driller during drilling, EDGE also provides information in the form of post-drilling reports where the drilling results can be analyzed in detail.

The drilling process can be followed drill rod-for-rod, enabling the driller to compare the various results and achieve continuous improvement. Hanstad concludes: “To be able to monitor every step during the drilling process and then review exactly what has occurred is something we have never been able to do before and is incredibly valuable because it gives you better control and a better result.”